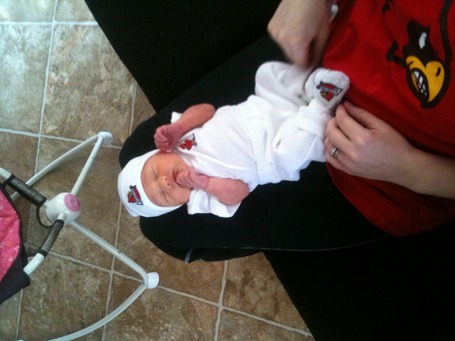 Jim Burr is among the three officials working tonight's game. Clean up the glass you just broke and rejoin me a line down.

I received a humorous forwarded email today in which a Larry Judd breaks down each member of the officiating crew. Here's his take:

Jim Burr (@jimburr on Twitter) - as soon as I saw Jim working the Michigan-Illinois game yesterday I thought oh shit, that is close to Louisville, I bet he is doing our game. So I hoped online to check the ref schedule, and sure enough, he is. We are 2-1 in games that Burr has worked this year, the loss coming against Georgetown. We were 2-1 all of last year (UK was the loss). Jim is working in Louisville more this year, he must have a steady girlfriend on Craigslist or Backpage. The "Booooooo" levels will be very high tonight, but that doesn't matter to Jim, I think he really likes it. Hopefully he doesn't screw up the end of the game like he did in the Rutgers/St John's Big East tourney game last year. I, like many, were hoping that would be his last Big East game. Here is an article from the Big East tournament last year

Mike Stuart - not as well known as Jim Burr and Tim Higgins, but equally as bad. He is sneaky bad. Personally, he is one of my least favorite refs that works our games. Mike works a lot of SEC games too so he doesn't get to see good basketball on a regular basis. His claim to fame, is tossing John Calipari from the Mississippi Valley State game a couple of years ago. He is a T happy guy. He last worked the Kansas State/Texas game on Saturday. We are 1-1 this year (loss was @ Marquette) and we were 0-1 last year (Kentucky game). Mike Stuart spends an abnormal amount of time discussing his calls with the coaches, a sign of weakness.

Les Jones - I am actually excited to see Les working the game. I believe that at some point, before the game, Charlie Strong will kick his ass and replace him as referee. No one will notice except the football recruits that are coming to the game. Les worked the Western KY game this year and the Pitt game last year, both wins. I wonder if Charlie has an alibi for those games last year. With Burr and Mike Stuart working with him, he will probably look like a hero tonight. I will be surprised if he even gets to blow his whistle.

Respectful man point in the direction of Eric Wood (AKA Pregame Serious Gorgui) for the forward.

AGAIN, don't be that guy (or girl) tonight: 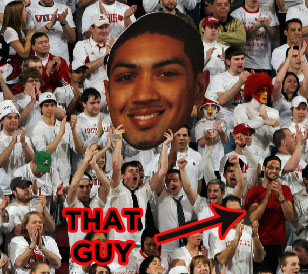 Kenny Klein said last night that Rick Pitino was not planning on wearing the white suit this evening...which probably means nothing.

Louisville is 23-1 all-time when ranked, playing at home and trying to complete a 7-game winning streak.

Anthony Davis might be the best player in the country right now, but he's still no Pervis.

As a result of his disappointing professional career, the greatness of Ellison as a college player sometimes is lost – especially his accomplishments as a freshman, when he led the Cardinals to the 1986 national championship. He averaged 13.1 points, 8.2 rebounds and 2.4 blocks during the season but lifted his game in the NCAA tournament, posting averages of 18.0 points and 12.0 rebounds. Ellison was named the Most Outstanding Player of the 1986 Final Four and earned the nickname "Never Nervous Pervis." A talented freshman that dominates is one thing. One with ice water in his veins? That’s really special.

Remember Roburt Sallie, the former Memphis player who was set to transfer to Louisville before grade issues got in the way? Yeah, well he got cut today from a professional team in Spain for failing to tell them he was taking penis enlargement pills.

I went to Drake's in St. Matthews for dinner last Friday - making sure to arrive well before you're required to have either an STD or an Affliction shirt on to get in the door - and wound up sitting a couple of tables down from Joker Phillips. Apparently he had just been putting some face time in at Trinity.

Anyway, of note is the fact that Phillips has a personal limo that just chilled out in front of Drake's the entire time he was in there. This being the case, I think Charlie Strong should have a personal tank by yesterday.

Later in the evening, one of my friends pointed out a gentleman who appeared to be Tick Rogers at the bar. Naturally, I did what anyone in this situation would do: wait until he starts to talk away and then yell "Tick!" He turned around and I motioned him over to the table so he could spend the next ten minutes or so proving that he is one of the coolest human beings on the planet.

We talked a little bit about his affinity for the steal and the start to the UMass game where everyone went the wrong way, allowing him to record an awkwardly easy dunk for the game's opening basket. Then, of course, Brian Brohm wants him all to himself and totally sidebar convos (verb) him away from us (God, I hate him). Then it's time for Tick to say his farewells, which includes a bro hug for yours truly.

Should I die, God forbid, "Bro-hugged Tick Rogers at Drake's" is now No. 3 on my list of potential one-line obituaries...and I'm not gonna lie, it's climbing. 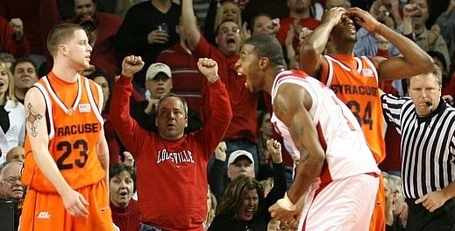 It was just announced that the Yum Center will be hosting second and third round games for the women's NCAA Tournament in 2013.

Since we've joined the Big East, Syracuse has probably been my favorite non-Louisville team in the conference, and not just because we always beat them (it helps). Love Boeheim, love their style (I launch threes and don't like trying to guard anyone off the dribble) and generally like their players. This is probably the least-likable SU team there has been during our stay, and I have a feeling everyone's going to accept that as a fact here in a few hours.

Just wait for the first time Fab Melo does the slightest positive thing.

Syracuse's seven-game losing streak to Louisville is the longest that Jim Boeheim has suffered against a Big East opponent. The Cardinals are also perfect in four games against Syracuse when the Orange are ranked in the Top 5.

Rumor has it Edgar Sosa will be back in the building tonight.

For the second time in as many years, Jim Boeheim got a little touchy when asked about Rik Pitino's recent success against him.

"Why don't you put in that I beat him six straight times?," Boeheim said. "Yeah, it's personal. When people write and say things to me, it's personal to me."