On Night Of Home Debut, Wayne Blackshear's Loyalty Should Not Be Forgotten

Share All sharing options for: On Night Of Home Debut, Wayne Blackshear's Loyalty Should Not Be Forgotten

This past Saturday about an hour before the start of Louisville's road contest against West Virginia, rumblings that Wayne Blackshear might actually play in his first collegiate game began to surface. Coach Rick Pitino had stated at his pre-game press conference on Friday that Wayne wouldn't be playing in the game and may not even be able to make his scheduled debut at DePaul due to his apparent inability to get in shape. Naturally, many were skeptical, but the rumors of Blackshear's long-awaited debut eventually came to fruition.

If you were listening intently to the game on television, you knew Blackshear would be playing a few moments before he actually appeared. Although he didn't get the roaring announcement from Sean Moth that he will deservedly get this evening, hearing West Virginia's in-game announcer lethargically call his name brought with it a great deal of excitement for Cardinal fans. Shortly after, the freshman drilled the first shot of his Louisville career and it finally happened: Wayne Blackshear had arrived in Louisville.

Whether Blackshear will ever meet or surpass the enormous expectations that have been bestowed upon him is still clearly up in the air, but he will undoubtedly be a fan favorite in the minds of many, not necessarily because of his play, but because he chose - and stuck with his decision - to put on a Louisville uniform.

Blackshear was in the spirit of giving on Christmas Eve, 2009 when he verbally committed to Pitino and Louisville during his junior season of high school. At the time, he was considered one of the top wing scorers in the country and was being heavily recruited by a number of schools, including Texas, Kentucky, and Marquette. Scout.com had pegged Blackshear as a five star recruit and one that would, without question, make an impact in his first season. 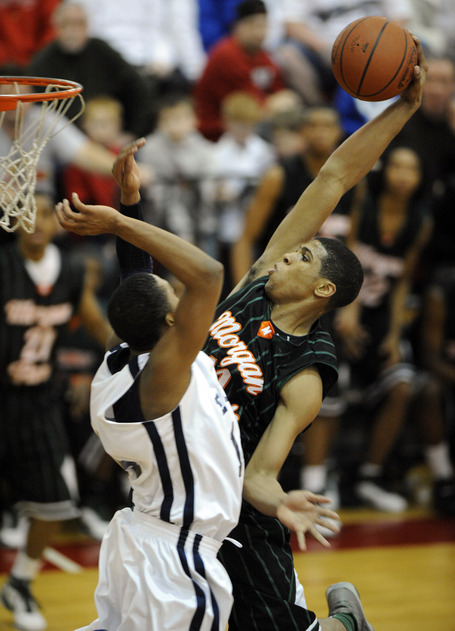 Louisville's recruiting class of 2011 was shaping up to be one of the best in the country heading into 2010. Along with Blackshear, Pitino had received verbal commitments from five star center Michael Chandler of Lawrence North in Indianapolis, Ryan Taylor, a 4 star player and teammate of Chandler's, and Zach Price, a four star center out of Cleveland, Ohio. Louisville was also considered the favorite to land five star point guard Marquis Teague out of Indianapolis Pike. Teague's father, Shawn, had played for Pitino at Boston University, and many believed Teague's commitment to Louisville was not a matter of "if" but "when."

Things began to unravel for Louisville that spring when Chandler decided to renounce his verbal commitment. Shortly thereafter, Teague spurned Louisville for rival Kentucky, calling his commitment to Calipari and the Wildcats a "business decision." Teague's choice to wear a red polo shirt at his announcement and then proceed to put on a blue hat instead of a red one only added to the pain. Right around the same time, rumors concerning Ryan Taylor's eligibility began to surface and it later became apparent that he would not be a part of Louisville's 2011 class. Pitino entered the summer recruitment period of 2010 with a great deal of uncertainty and only one constant: Wayne Blackshear.

Although Blackshear stayed committed over the summer, many began to wonder whether Wayne would remain a Cardinal. After all, he had substantial connections to Nike, and Louisville is an Adidas program. Rick Pitino recently acknowledged shoe companies' involvement in recruiting and with Blackshear, it was no different.

"Wayne Blackshear played for the top Nike AAU program in Chicago (Mac Irvin Fire) and was a standout at Nike's top summer camp," said InsideTheVille.com editor and publisher Mike Hughes. "After he signed with Louisville, Wayne wasn't invited to play in Nike's top all-star game, the Jordan Classic, after his senior year despite being one of the best players nationally on the Nike circuit. Shoe politics play a big role in grassroots basketball and typically the elite Nike AAU players sign with Nike college programs. Wayne Blackshear was an exception to the rule."

With Blackshear remaining in the fold, Pitino had an anchor to his class and could move forward despite the other early disappointments. Louisville's recruiting picked up in the summer and early fall, and Pitino was eventually able to land elite prospects Chane Behanan and Angel Nunez. The coach and his program had escaped from the uncertainty of the spring with a top ten recruiting class, and despite a number of rumors, Blackshear signed his letter of intent without issue in November. 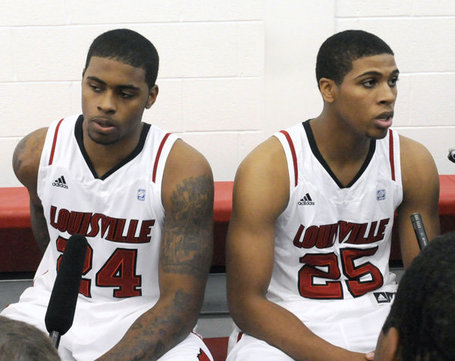 Wayne Blackshear will of course be remembered for whatever he ends up doing on the court, but his loyalty to the Louisville basketball program should not be forgotten. In his freshman year, he has overcome two major injuries and beaten the odds by returning to play out the remainder of the season. His determination in recovery alone deserves a standing ovation at the game against Syracuse tonight, but those of us who followed his recruitment will always be standing and clapping for him, thanking him for his loyalty to our coach and program.