Louisville began last week with the explosive, dominant performance over a talented opponent that U of L fans had been waiting for all season. It ended it with a gritty, emotional comeback road victory that had also been noticeably absent. It was a good week.

The Cards have won six straight and finally have all their pieces healthy and in play with six regular season games remaining. I'm still not sure what our expectations should be going forward (tonight figures to provide some significant insight), but I do know that I'm about 55 times more optimistic than I was a month ago.

If you aren't at least borderline giddy this morning about what happened on Saturday and what could happen inside the Yum Center in about eight hours, well then you're probably not reading this right now.

Selfishly, I wanted Wayne Blackshear's 2011-12 debut to occur at home, but the move to let him see the floor for the first time in a place like Morgantown was genius.

Say Wayne played for the first time tonight. He would check into the game, the place would go nuts, and the crowd would be urging him to shoot every time he touched the ball. Not only would this put a considerable amount of additional pressure on F-Dub, but it would completely disrupt the offense and the overall flow of the game. I imagine it would be similar to the Pikeville game where Wayne was obviously too juiced up and overshot on his first two 3-point attempts by about five feet.

Instead, Wayne made his season debut in front of a crowd that was hostile, but of which about 90% had no idea who he was. There was no "ooing and awing" when Blackshear removed his warm-up for the first time (at least outside of Louisville), and the result was that Wayne was allowed to play care-free, the best possible mindset for a pure scorer.

Now, Blackshear will head into his home debut and the biggest game of the season for his team brimming with confidence. He'll play solid minutes against a defense that should allow him to get a few clean looks, and he will have no hesitation about taking them.

I think Rick Pitino has been fully aware this whole time of just how crucial the addition of Blackshear has the potential to be for this team, and he certainly could not have handled the whole "working him into the mix" aspect any better.

For 20 minutes on Saturday, Wayne Blackshear appeared to be the missing piece of the puzzle for a Louisville team that entered this season with national title aspirations. While it'd be foolish to expect a superstar effort night in, night out from this point on, I don't think there's any shame in being very excited.

The outside college basketball fan who read the game recap but didn't watch this game wouldn't see this as a particularly big deal for Louisville, but this was a West Virginia team playing with desperation. The result was the Mountaineers giving one of their best performances of the season, and U of L still boarding the team plane with a victory.

The game was so frustrating for 35 minutes because U of L was actually playing incredibly well, but simply could not come up with that key stop to get them over the hump. Finally, it happened and the Cards took advantage in the way that good teams do. Regardless of what anyone says, Saturday was a terrific, terrific win.

Most encouraging stat of the game: U of L committed just eight turnovers. Not bad against a team with great length and the ball pressure of Truck Bryant. 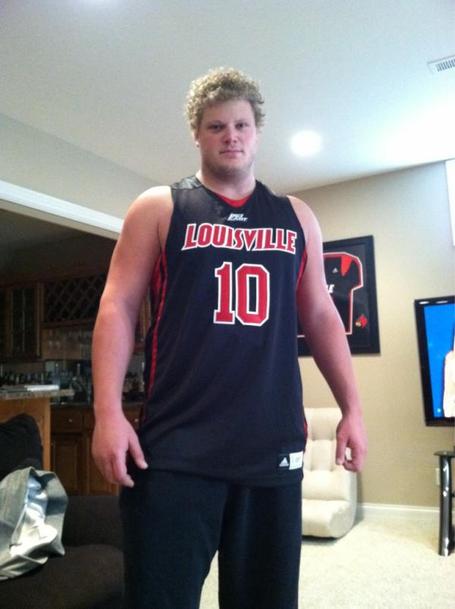 Speaking of Gorgs, obviously not his best effort. Gorgui has himself admitted that he prefers to go against players taller than he is because he likes having the quickness advantage. This wasn't the case with the bulky Deniz Kilicili, who was patient and got Dieng to fall for the shot fakes he had been staying home on all season.

A poor effort doesn't change the fact that he's usually the most important player on the floor for the Cardinals. His presence alone does so much for this team, and that almost always shows when he's relegated to the bench - even if it's because he's playing poorly.

I'd expect a solid bounce-back effort tonight with Fab Melo in the building.

Follow-up note: anyone who didn't already dislike Fab Melo is going to dislike him after tonight. He's pretty obnoxious.

Was there any doubt that Kyle Kuric's game-tying three was going in? The moment I saw Wayne start to throw that pass to him in the corner, I knew we had three points.

The king continues to be the most clutch player in a Cardinal uniform, with that three, the intercepted pass and the two free-throws in the game's final seconds serving as the latest bits of evidence.

Blackshear has (deservedly) drawn the significant chunk of postgame attention, but Kuric's play down the stretch was the biggest factor in U of L stealing this win.

I know it looked bad live, but Blackshear absolutely did not commit a foul on the steal which resulted in Russ's go-ahead lay-up. It was a bad pass and the West Virginia player who fell didn't even protest the no-call.

The Russ Show took center stage again during a second half stretch where we needed offense.

I loved what Pitino said after the game about the next step in Russ's evolution being to not take that "heat check" shot after he's made two or three in a row, and instead look for the open man since he knows the defense is going to be keying on him. It's something that Preston Knowles did exceptionally well during his senior year.

I tweeted about Doris Burke mistakenly referring to Russ as J.R. Smith's brother during the game, and drew a ton of responses, almost all of which made some reference to her sex. Most were bashing her, but there were a few that were along the lines of, "give her a break, she usually knows her stuff and is the best of the female analysts."

What does being a female have to do with anything? She's a professional analyst who has called several of our games and made a fairly egregious error. I would have called anyone out for making that mistake, male, female or mogwai. It doesn't mean that I don't like Doris (she's generally all right), and it doesn't mean I dislike female commentators, it just means I recognize that Russ Smith is not J.R. Smith's brother.

Though he didn't record any of the buckets that made us jump out of our seats, Peyton Siva had a handful of key driving baskets that kept us within the 10-8 point rage when it appeared we were on the verge of allowing the game to slip away. West Virginia's unwillingness to play an up-and-down game and their ability to take care of the ball meant this probably wasn't going to be a game where Peyton could finish with nine or ten assists, but he still managed to make key plays and give a solid overall effort.

Not sure why the WVU student section felt the need to boo him the entire game. I know he hit the game-winner last year, but they played again in Morgantown after that game and he didn't receive that treatment then. It's not like he blew kisses to the cheerleaders or anything.

Oh, Andrew. You are certainly entertaining...and probably not going to be allowed to have a Twitter account during the season.

Kevin Jones is the best player in the Big East.

Zach Price is not the best player in the Big East.

I love him and he's got the potential to be awfully good in a couple of years, but that may have been the biggest example I've seen of not moving your feet on defense since I played bitty ball at the YMCA and you weren't allowed to move off the 'X" taped to the ground.

He's going to get better.

How does Kilicili get T'd up for throwing the ball up in the air in the first half and then not in the second half for literally doing the exact same thing?

Lack of consistency is the biggest issue I have with the way the modern game is called, and that was a shining example.

The charge Chane took to foul Kilicili out of the game (which induced said ball throw) couldn't have been much bigger. It was a heady play by Chane, since the position Kilicili caught the ball in almost assured him of scoring two points. There was no point in not at least trying to get the charge call. If you do, he's out of the game. If you don't, he's going to the line where he struggles and will have to earn the two points he was virtually guaranteed to get if you didn't foul.

Big time play by the freshman.

There is nothing better than being a Louisville basketball fan when the team is playing well in February and March. Absolutely nothing.

Enjoy not accomplishing anything today outside of thinking about Syracuse.