No idea where to start here.

West Virginia shot 12 more free-throws than Louisville, dominated the glass for most of the game, held Louisville's inside duo of Behanan and Dieng almost completely in check, and U of L's key offensive spurt was spearheaded by an undersized guard most people thought would transfer after last year and a freshman who hadn't played in an actual game in almost a year. 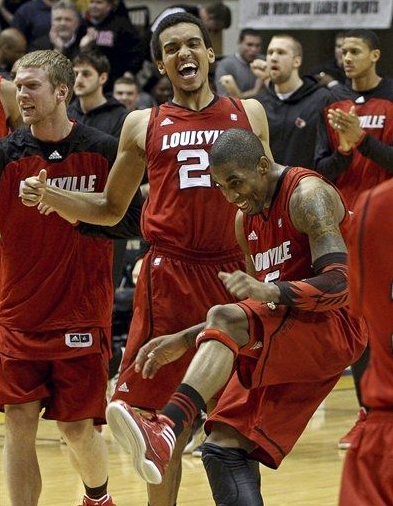 The Russ show when the team needed a spark most, the Kuric three to tie it and clutch free-throws to clinch it, Chane's huge charge take, Chris Smith being rock solid, Fat Wayne looking like the missing link, they s'posed to be Big 12 part II; this is absolutely one to savor.

So much to discuss, but I think you have to start with Blackshear. Even if U of L had lost this game, I think it would have been an extremely encouraging afternoon for the future. Wayne is that next level player with great size and skill that recent Cardinal teams have been noticeably lacking. Even something so simple as the way he made tough catches or snatched loose balls like there were suction cups on the ends of his hands was cause for excitement. If he's this good already and playing 20 minutes without disrupting the chemistry on the court or the flow of the game...well, I'll let you end that sentence.

You also have to love the fact that Pitino said afterward he knew he was going to play Wayne, but said otherwise publicly so Huggins wouldn't prepare for him. You sandbaggin' S.O.B., get over here and give me a hug.

Obviously, there's more praise to be tossed around (Charlie should be involved in every game thread image ever), but we'll get into it more once the shine wears off a touch.

Monday night: white out, Wayne's Yum debut (ovation figures to be outrageous) and a matchup against the No. 2 (or No. 1...c'mon Vandy) team in the country. Feel free to begin your tailgating right now.