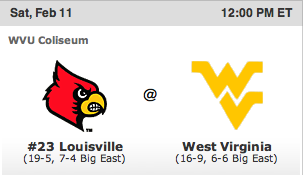 I think by now we all are well aware that Monday was quite fun. Like Mike stated earlier this week, that was by far the most fun game we have seen this year. While there are clearly many flaws in how UConn played (mainly giving up), we showed that killer instinct to knock them out.

That is something good and great teams have the ability to do. We smelled blood and ran them out of the gym. To absolutely embarrass a team with two lottery picks and probably two other future pro’s on their team while on national TV certainly bodes well for us down the stretch.

Moving on to the task at hand, West Virginia. Saturday will probably be our final visit to Morgantown for the time being (can’t say I’m mad about it) and should be an extremely tough game. Morgantown is always one of the toughest places to play in the Big East as their students are loud and rowdy from start to finish, and with them coming off a tough loss to Notre Dame, I expect it will be no different than usual.

West Virginia is led by Big East player of the year favorite Kevin Jones, who has been absolutely superb this season averaging 20 points and 11 rebounds. Jones, Truck Bryant, and Deniz Kilicli all seem like they have been around forever, and they will do everything they can to not allow the Mountaineer’s to lose.

I personally can’t wait to see the Behanan Kevin Jones matchup. Jones will certainly get his, but this will be Chane’s biggest test to date. Hopefully he will continue to play strong and at the very least limit Kevin Jones. Behanan absolutely cannot afford to get in foul trouble tomorrow.

Speaking of Behanan, a close friend of mine came to me recently with a fantastic nickname for Chane. While I can’t take credit for it, I will spread the magic whenever possible. The BEHANIMAL lives.

I don’t think it can really be overstated how awesome Gorgui was on Monday night. He wasn’t 100% but he came out and gave it his all. While he didn’t have any blocks, his presence on the floor is so important for this teams success. To hold Andre Drummond, who will be a top five pick in June’s draft to zero points and four rebounds on a gimpy ankle is truly astounding.

Gorgui’s play this season has been nothing but outstanding and the scary part is that he has so much more room to grow. Kilicli will be another good test for the Gorgster tomorrow, but he has just been beaming with confidence for the last month or so.

Even Mugatu knows greatness when he sees it. 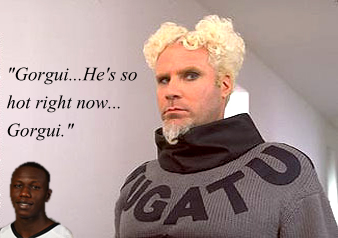 Prediction- There is no question we’re hot right now, and I think the loss in Morgantown last year to end the regular season is still lingering in many fans minds and hopefully the players, too. It will be hostile, hard fought and close throughout, but I think we pick up win number six in a row 62-55.

Side note- I’m not sorry for predicting FW would play last week. I acknowledge I was wrong, but I have no remorse. While he has been cleared to play in games, according to Pitino he is still quite out of shape. I really thought he had cut down on the Milk. Give it up F-Dubz; we want to see you get some run. For those wondering, I don’t think he will play tomorrow.

Here are some stats for your viewing pleasure. 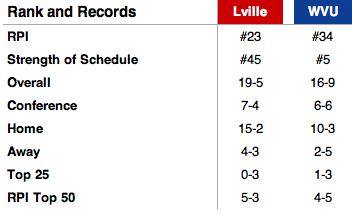 This won't get old anytime soon.

While slightly more throwback, neither will this.