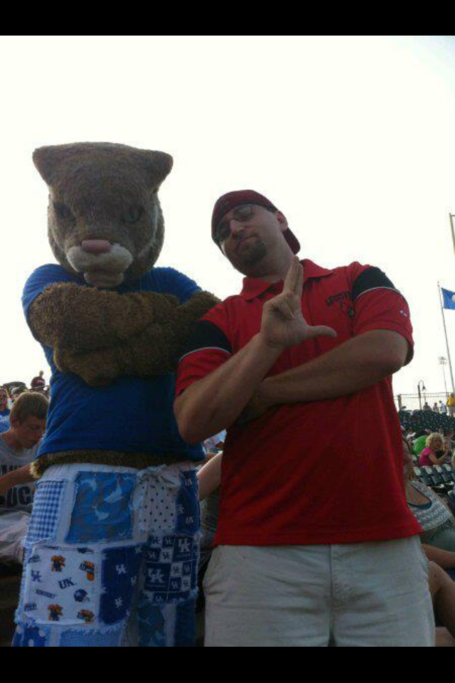 This is Steve Couden showing up the Kentucky Wildcat...who appears to be having a little muffin top action going on.

I must admit to feeling bad for Ace Wales for the way this whole thing played out. That said, he's not going to endear himself to many U of L fans by making statements like this one to WHAS-11's Adam Lefkoe:

"If you want to send the Florida players here to take over Louisville, we're going to all go to WKU to take over"

I suppose Ace feels like he was done wrong, but as has been said countless times before, he had almost two years to commit to Louisville if this was something that meant so much to him.

I think he's more upset than anything, something which shows in an interview with Rick Bozich where he almost sounds depressed.

Even with the statement he made, there's no point in piling on Wales. He's a terrific talent, and from everything I've heard, a great kid. He'll have a solid career at Western.

I actually received a solid number of emails regarding my Andy's TV blurb from last night. Apparently many Louisvillians are as intrigued and/or enthusiastic about Andy's as I am.

One of those emailers just so happened to be the son of "Andy" himself, and he hit me up with a little bit of Andy's knowledge. Here's a portion of the email:

Andy's TV is over 50 years old, and the original Andy gave his company to his two kids in the 80s. When they retired, they handed the company over to my father who was in the market and looking to be a small business owner. We are a Ukrainian family (came over in '91), and electronic repair was my father's trade in the old country, and it was extremely fortuitous that such a landmark/recognized building to Louisville was on the market at the exact time he was looking to branch out from being just a regular technician.

My father realized the significance of leaving Andy's name, as we all believe it would've fail horribly as Leonard's TV. He even goes by the name Andy on a daily basis to keep up with the persona. Believe it or not, business is great! He stays very busy mostly on service calls. People rarely bring their televisions to the shop anymore, and prefer to get it repaired from the comfort of their own home. The shop hasn't changed in years inside...There is even the original Philco (first television ever mass produced) sitting in the corner among plasmas and LCDs waiting to be fixed.

T-Will came by once to fix something. My dad told me about it. I saw him at 4th Street when I was visiting town once and yelled "Hey! My dad fixed your TV!" and he turned around and said "cool man" and walked away because that may have been the weirdest thing someone's hollered at him.

Come for Cardinal sports news, leave with Louisville small business knowledge. If only every other institution could be so diverse. There probably wouldn't be any wars.

Jeff Goodman appeared on "The Two Man Game" with Mark Ennis and I last night, and if you weren't able to catch it, here's a quick review:

--I lobbed him a couple of softballs before hitting him straight with the "where's my prize, bro?"

To his credit, Goodman sounded legitimately apologetic. He claimed he thought about an autographed Steve Masiello picture when he was in Manhattan a couple of weeks ago, but didn't think it was big enough (he's right). Then he threw out the idea of me coming down to New Orleans for Final Four weekend and him paying for an evening on the town (Goodman parties). This got him somewhere.

Obviously, I'll keep you updated on the proceedings.

--Goodman also said that he wasn't "hating" on Louisville when he consistently stated that the Cards were overrated early in the season, he just knew that the loss of Wayne Blackshear was a better deal than most people were making it out to be. He doesn't think that Mike Marra or Stephan Van Treese would have made much of a difference (disagree), but he said losing Blackshear took Louisville from a top ten team to a 20-25 team that will be lucky to make it out of the first weekend of the tournament.

--I did not take the opportunity to drill him for his Gorgui Dieng comment. Suffice it to say, I didn't sleep much last night.

Thanks again to everyone who tuned in. The show's been a lot of fun so far.

Speaking of Blackshear, on his radio show tonight, Rick Pitino said the best anyone should expect from FW is for him to play a few serviceable minutes a game when other players need a break. I think it's understandable that he's setting the bar so low for a player fans had such high expectations for, but who really hasn't played much basketball in the past year.

The only other interesting tidbit from the show was when he was asked about the gym rats on the team. He said Angel Nunez spends more time in the gym than anyone else, but Peyton Siva was probably second. He said Russ spends the least amount of time in the gym and consistently warns him that it's going to come back and bite him. He singled out Zach Price and Chane Behanan as two other guys who aren't really gym rats, but added that Behanan goes incredibly hard in practice.

This is the perfect time to link this Eric Crawford blog post on how Pitino uses his public voice to motivate.

So for those of you who feel you are being sold something in those postgame comments, congratulations. You're absolutely right.

Not that I think Pitino is saying things he doesn't believe, but I do think he is saying things for reasons other than breaking down a basketball game, or for reasons in addition to that reason. In other words, what he's saying in a postgame news conference is not always necessarily what he might say if he were a media analyst covering the same game. There are different agendas at play, different concerns - how something will be received by an individual player, how something will be used publicly and what impact that might have. But this is part of every coach's makeup to a varying degree.

Pitino, certainly, is able to speak to these things himself, and does whenever asked about them. With the team off this week, I haven't asked him about the Dieng comments specifically, but he doesn't mind to talk more specifically about what he meant. It's very true that coaches, most of them, see more than the rest of us. But it's also true that they are contrarian enough to try to talk us into believing we didn't see what we thought we saw from time to time.

It's one reason that the further removed I get from beat work, the less I tend to use what is said in news conferences. 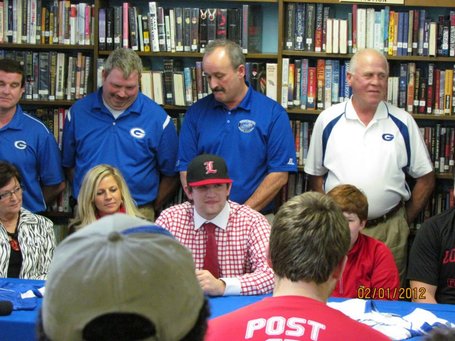 It's officially February, which means it's time for people (especially dudes) to start bitching about how much they hate Valentine's Day.

I just want us all to be overly affectionate together.

Don't tell me I love too much.

Gonna go ahead and completely ruin the warm vibes by turning the attention to Sports Illustrated's Andy Glockner, who gives CC a little shoutout in his latest Bubble Watch.

Cardinals fans didn't take very kindly to my Twitter query as to why they were going ballistic after a late three to ice a game against a league bottomfeeder. That said, it was a nice moment for Jared Swopshire and any win for the Cards is important while they get healthier. They backed that up with a nice road win at Seton Hall to really help lock in their position.GW: Vanderbilt, Long Beach State, Memphis?, at Seton HallBL: Home to Notre Dame?, at Providence by 31

Glockner also apparently noticed johnnyjoejohnson's FanShot and took out his frustrations on me.

Would have never bought that Villanova was tied for 13th if he hadn't dropped the "facts" hashtag on me. After that though, I was like, "no way this guy's playing."
You're all right, Glockner.

You know what's not all right?

Having a little debate with my dad. He claims at the end of the new Villen video that Pitino is telling Herb Pope "don't play high, OK?" I'm not exactly sure what he says, but I think the "high" is actually "hard." I posed the question on Twitter and the response was pretty split.

Watch the exchange and draw your own conclusion.

Louisville.com profiles Deion Branch, who will go for his third Super Bowl title on Sunday.

I'm usually all about women's rights, but this is exactly why they don't get a DePaul Day.

According to the Rivals rankings, Rutgers still wound up with the best class in the Big East, with Louisville finishing second.

The Cards fell just outside of the top 25 in ESPN's class rankings, where they again trail only Rutgers in the Big East.

"Wales Picks WKU Over Louisville" (which is everywhere) is the most misleading headline since...I really don't want to say "Dewey Defeats Truman," but there aren't a whole lot of other options in the "famous newspaper screw-ups" department. I'd try to make a funny one up but I fear the moment has passed us now.

Today was the best day you'll have in your four years of being a Kentucky football player, Langston Newton.

And finally, the official recruiting class press release from U of L.