Share All sharing options for: Charlie Strong Puts A Bow On Louisville's 24-Player Recruiting Class Of 2012

I strongly urge all of you to watch the video above at some point today. It's a 30-minute commitment, but it's worth it.

-- Strong is very excited about the class and commends the staff on the tremendous job they did over the past several months. The class fills several positions of need with a group of highly talented and motivated players.

--He reiterates his feeling that this city deserves a winner, and he and the staff are working incredibly hard to make that happen.

--He recognizes the importance of keeping local talent, but also says you have to get the best players from out-of-state to convince the in-state guys that they need to stay home.

--The program won't get to the point he wants it to be until the best local talent starts staying home. He doesn't understand why the best players from around the country understand that they can win big at Louisville when some of the guys from around the area don't seem to be of the same mind.

--On the near future of U of L football: "It's going to be special."

--Says he can't address Ace Wales specifically, but does make some comments about the staff only being able to assess a player and then offer him a scholarship. Says after that it's on the young man to decide whether or not he wants to be a part of this.

--The U of L staff no longer has to coach effort. The players now have an understanding for what the program is all about and what his coaching staff expects out of each and every one of them.

-- Knows the Cardinal program was rolling, went to the Orange Bowl and then "for some reason it stopped." They're working hard to get back to that point and he feels they're on their way.

--The team had a taste of part of a conference championship last season, and now it's on them to take that next step up. It's all about how badly they want it.

--There's still a "space or two" available in this class.

--Next year's class will be much smaller.

--Says the best thing about the 2012 class is the attitudes and work ethic of the players. They all understand what Louisville is about and want to be a part of it.

--"Every one of these young men wanted be in this program...They see something special that's about to happen here."

Overall, I think this is a rock solid class loaded with size and guys who are going to be key contributors for multiple years. The linebacking trio of Dawson, Burgess and Brown is about as good as any you'll find in the country.

The almost forgotten pieces are Gerod Holliman, a 2010 U.S. Army All-American who definitely has the potential to compete for a starting safety positon right away, and Florida transfers Robert Clark and Gerald Christian, who could be huge assets in 2013 and 2014.

Strong also landed those specialty position players that you have to get in every class. I think Will Gardner is extremely underrated and could definitely be the starting quarterback at U of L once the 2015 season rolls around. And fans have already fallen in love with running back Brandon Radcliff, who provides the combination of speed and power that the Cards have needed in short-yardage situations for the past several seasons.

I don't think there's any question that Strong's statement about the future being "special" was genuine. You don't have to strain to see that special thinks are happening here.

Definitely a good day to be a Cardinal. 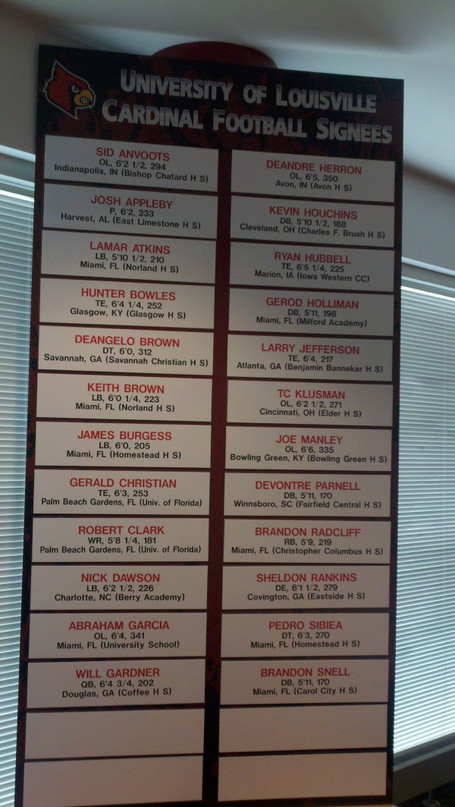