Rick Pitino is hoping to have Gorgui Dieng back in uniform when his son Richard and Florida International come to town on Dec. 19.

"I think it's important to get two games under your belt before that Kentucky game," Pitino said during his weekly press conference.

Dieng suffered a fractured left wrist early in the second half of Louisville's semifinal win over Missouri in the Battle 4 Atlantis tournament. He re-entered and played in that game, but has not suited up for the Cards since. 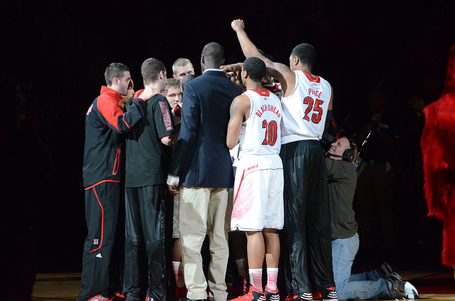 The Blazer Gorgs era could be short-lived

Pitino says Dieng has started conditioning again, but that he is currently in "pitiful" shape. The Cardinal coach expects that status to be changed by next Friday.

One of the most important things Pitino says Dieng will have to learn to do is fall on his butt and back instead bracing himself with his hand. Dieng suffered the injury when he put his hand down to break his fall after attempting to take a charge.

Dieng was averaging 8.2 points, 8.0 rebounds and 2.0 blocks before his injury.