The Card Chronicle Bird Mask is all about making its feelings for Charlie known today.

Hearing from some pretty reliable sources that talks between Charlie Strong and the University of Louisville are really heating up. Stay tuned to CardChronicle.com for further updates!

Rick Bozich praises Louisville while ripping on Kentucky. Read that as "writes the best type of column possible."

Louisville just defeated Tennessee as many times as Kentucky has beaten the Volunteers since 1985.

When Louisville plays Florida in the Allstate Sugar Bowl Jan. 2, Strong figures to be making more money than Will Muschamp, the guy coaching Florida - and the Gators have won two national championships in the last seven seasons.

Jaw meet floor. Image meet rewrite. When athletic director Tom Jurich says that he considers the Louisville football job one of the Ten Best Jobs in America it's more than some of that old-fashioned Howard Hyperbole.

Overshadowed by all the Charlie Strong hubbub on Wednesday was the actual biggest story of the day.

As well as the second biggest story of the day.

Every word has been worth it.

According to the folks at U of L, there are still a limited number of student Sugar Bowl ticket packages being sold in the SAC. For $190 you get a lower bowl ticket in the student section along with travel by coach bus and lodging in the Intercontinental Hotel New Orleans.

So in the pastweek +, 'Ville joined ACC, made BCS, Saw Ky drop out of top 25 & kept Strong who fades 4 million from SEC. "Christmas" Cards

Andrea Adelson of ESPN has a great take on Charlie Strong's decision.

Charlie Strong spoke passionately, emotionally, beautifully, honestly and confidently Thursday morning, a man so determined to be a real leader he made a choice just about every leader in college football would not have made.

For the love of his players.

For the love of his community.

For the love of his family.

We have become so accustomed to coaches bolting for the next available opportunity at bigger, richer programs, that most everybody expected Strong to leave, too. But Strong's decision to stay at Louisville served as a reminder that sometimes the best opportunity you have is the one staring you in the face.

If you missed the news, the football autograph session that was originally supposed to take place yesterday has been rescheduled for next Wednesday, Dec. 12.

Tweet of the week goes to Mario Benavides, who produced this gem during the height of the Charlie Strong panic yesterday.

The guy is the best.

The AP's story on Charlie staying at U of L focuses on loyalty being repaid.

Per usual, Eric Crawford laces a double down the left field line (tired of baseball analogies being limited to the long ball).

A week ago, U of L was a football program stranded in the Big East with an injured quarterback who couldn't practice, an underdog to Rutgers coming off a loss to Connecticut with a BCS opportunity that looked to be slipping away and a coach rumored to have been interviewing with an SEC school during game week (a report he strongly denied.)

Seven days later, U of L is a member of the ACC, preparing for a Sugar Bowl matchup with Florida, ironing out a contract for Strong after he turned down Tennessee to stay. 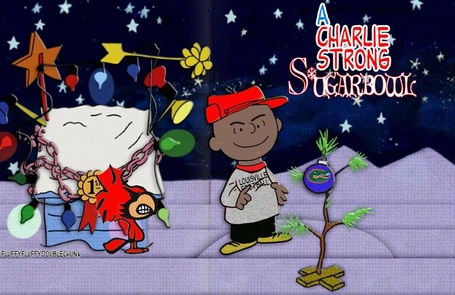 I never thought it was such a bad little team. It's not bad at all, really. Maybe it just needed a little love.

A really good read from C.L. Brown on U of L's defensive philosophy and how the team has been watching old game tapes to improve.

"We watched how Earl (Clark) and T-Will (Terrence Williams) and those guys kind of got after it, so we're trying to mirror it and understand it a lot more like they did," sophomore guard Kevin Ware said. "One guard pressuring the ball, the other guard dropping middle. If one guard gets beat, the other one comes in and helps out. It's real confusing because you can't run your offense."

Charleston surely couldn't. The Cougars committed a season-high 27 turnovers and were held to their fewest points since joining NCAA Division I in 1991.

"It confused everybody last year (too) because of the amount of pressure you put on them in the backcourt," Pitino said. "So now you're thankful you got it over (the time line), and you don't see a flat zone. You see a half-court pressure situation. So it's a double-edged sword for teams. They think, ‘Oh, we got over it,' when no, it's still there."

Love the video of Wayne Blackshear saying the tapes they've been watching "go all the way back to the Andre Mcgee days." Also, I've had three different people ask me since Tuesday if Wayne wears "guyliner." I'd never heard the term (product?) before, but I think it's fantastic. I also think Wayne's all natural. Curvy and natural.

If you enter the promo code "CHRONICLE" over at the Strait Pinkie store, you can get a solid 2 for $25 deal on the Teddy Bridgewater shirt seen in the promo below. 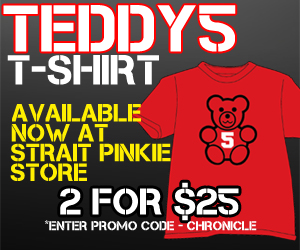 'Tis the season for Ted.

I don't...I don't even know why I just said that. I've been hearing a lot of holiday commercials recently and it's just a hard thing to turn off. I'm really sorry.

Nifty tidbit from Hot Hot on Twitter: If Stephan Van Treese qualified (6 minutes short of the minimum 40% minutes played), his 20.2 offensive rebound percentage would rank him fourth in the country in that category.

It sounds so much better than it looks when typed out. Just ignore how it looks and start saying it. Really rolls off the tongue.

A great holiday tradition, but distinctly remember seeing it during early mornings growing up and being pissed off because it was really cold outside and I wasn't out of school yet. Still, terrific ad.

Really enjoy the ambiance of the living room in the commercial...also just really enjoy M&M's.

It would appear that the takeover has already begun. 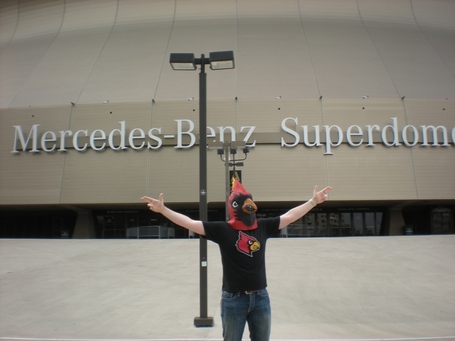 We also have evidence of Cards fans celebrating both the bowl bid and the ACC invite on Bourbon Street. 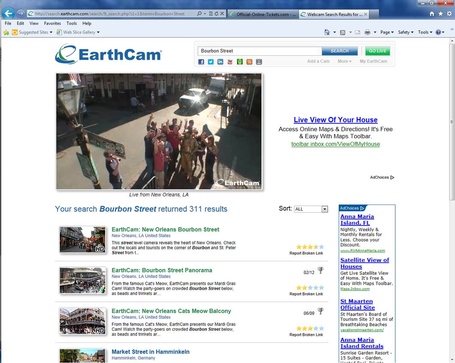 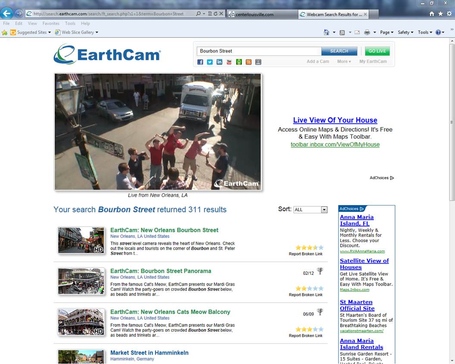 Playing four games at the same time in Cowboys Stadium is apparently the latest college hoops gimmick idea. It's an awful one.

I'm not sure if this story was free to the public when Jody Demling originally wrote it, but it is now and includes a Pitino nugget I'd never heard before.

If he ever had a doubt - which he says he hasn't - that he should have retired it ended one morning this summer. And it wasn't because of a victory on the floor or in recruiting, but a visit from former U of L star Earl Clark.

"Earl asked if he could come by and I said, 'Uh-oh, I hope he's not in trouble'," he recalled. "He sat down in my office with me and I won't tell you details, but it was such a beautiful story. He left and I sat in my office and cried for 20 minutes.

"I had to go to a staff meeting, so I went into the bathroom and I cried again. I couldn't stop, I just kept tearing up and that's what it's all about. That's what you get when you have a relationship with these guys. Relationships are important and a relationship is something you are going to have for years.

"Why would I ever want to give all of that up. I'm enjoying every minute of it."

Again, this is a great time to be a Louisville Cardinals fan. 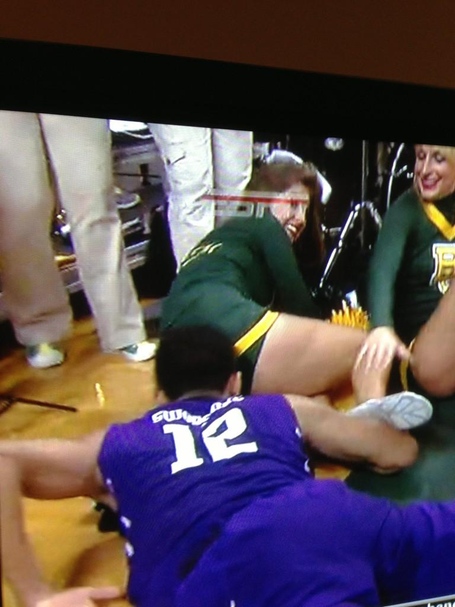 That's how you get pinkeye.

He's now averaging 9.8 points and 6.7 rebounds per game for 7-2 Northwestern.

Looking for Sugar Bowl tickets and would like to helo out The Leukemia & Lymphoma Society? See below.

What could be a better Christmas present for your college sports fan? 4 Loge Level Tickets and 2 Plaza Level Sideline Tickets to the Sugar Bowl in New Orleans on January 2, 2013. Accommodations for January 1st and 2nd at a 4 bedroom, 3-1/2 bath condominium in a historic building one block off the St. Charles Avenue streetcar line. $75 Gift Certificate to Acme Oyster Bar in the French Quarter. $150 Gift Certificate to Andrea's Restaurant in Metairie, LA. Lagniappe Gift Certificate to New Orleans Coffee and Beignets three blocks from the condo.

Some Quentin Snider highlights from his monster performance at the Marshall County Hoopfest.

Two of the biggest trollers of Louisville since the Cards were invited to the Sugar Bowl have been pretty interesting.

Louisville yeah you won the Big East but get ready for an ACC ass whoopin. #justsayin

And finally, here's Brett McMurphy's story on the Strong news, in which he confirms that Charlie is likely to receive a new eight-year contract that will keep him at U of L through 2020.