Fitz and William Norris are fully aware that regardless of what Louisville's head football coach chooses to do, the Cardinals are headed to the Sugar Bowl and the ACC. These are still good times.

CHARLIE STRONG UPDATE: He's going to be coaching at Louisville next season or he's going to be coaching at Tennessee next season. Outside of that, there's really not much to say (or at least much that should be said). Yes, I've seen the SportsCenter update and I've seen the Clay Travis tweet. There's nothing we can do but wait. I can't imagine we'll make it to Thursday without learning something significant.

Also, can we all agree to ignore any and all coaching news/rumors that occur from around 9-11 tonight? I think we need all need this time with the basketball team for sanity purposes.

DraftExpress came out with its new 2013 mock draft last night, and it now includes two Cardinals in the first round. Gorgui Dieng at No. 24, and...Mr. Russ Smith at No. 28

Also bumped Russ Smith into the first round. Sure he's got flaws, but he's got sparkplug off the bench NBA game-changer written all over him

Just as we all suspected 14 months ago. 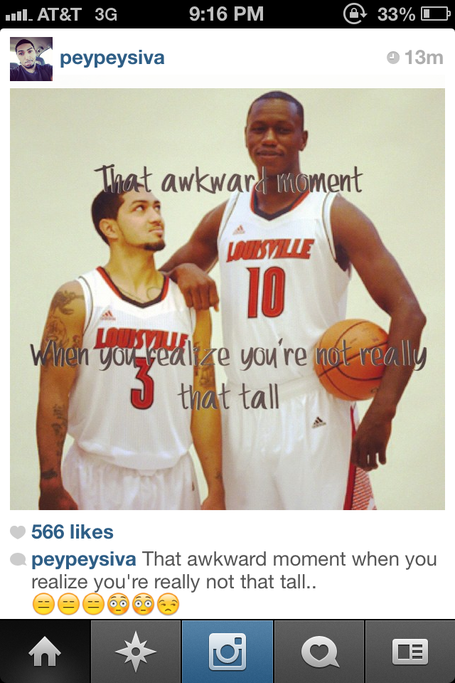 Congrats to Charlie Strong on being named AFCA Region 1 Coach of the Year on Monday. Strong was one of five coaches to receive the honor from the AFCA.

Yahoo Sports has the Sugar Bowl ranked as the fifth-best bowl game of the season.

5. Sugar Bowl (Jan. 2, New Orleans): Florida (11-1) vs. Louisville (10-2)
This could be a great matchup of agile quarterbacks, but if Louisville's Teddy Bridgewater isn't healthy, this game could be a blowout.

Four years ago on this day we watched Mike Teel throw seven touchdown passes in the first half and Rutgers lead our guys 49-0 at the break. Today, we're less than a month away from watching Louisville play No. 3 Florida in the Sugar Bowl.

I can live with coaching rumors being the worst thing about the program.

In a battle between her father's team and her school, Jacqueline Pitino will side with the Cards.

Another person who will be smiling, regardless of the outcome of tonight's game, is Coach Pitino's daughter, Jacqueline who is a junior education major at CofC.

"I will be wearing red for Louisville," she said. "I love my school and greatly respect Charleston Basketball, but my family is No. 1 in my life. Any other game I'll be rooting for the Cougars."

I always think it's hilarious how non-Kentuckians can't fathom why anyone from this area would root for Louisville or Kentucky over a school they're attending. People just don't understand that U of L and UK are akin to professional sports teams here, and that loyalty generally supersedes any other, regardless of where we are in the world.

I did't attend U of L for undergrad, and neither did the vast majority of my good Cardinal friends. We all dealt with the same issue of attempting to explain why our hearts were still back home and only casually behind the university that was receiving our tuition. Eventually you come to terms with the fact that they're not going to get it.

Kudos to Jacqueline for embracing life as a Cards fan attending another school, and for not shying away from giving an honest answer to a somewhat difficult question.

Via Elle Raiser, check out the get well basket the ladies of Delta Zeta made for Gorgui. 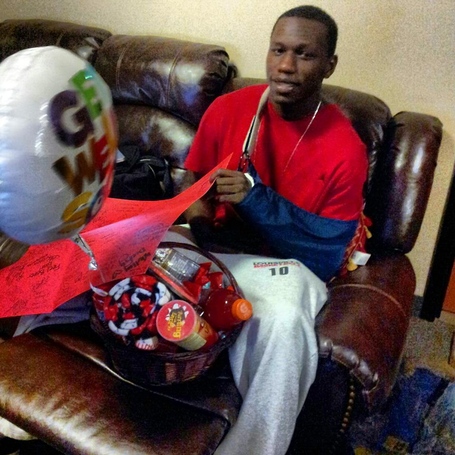 Mark Coomes of Insider Louisville with an extremely...strong...take on Charlie's perceived lack of gratitude.

Barely 13 months ago, in the midst of a three-game losing streak that had dropped Strong's record at U of L to an underwhelming 9-10, Jurich gave Strong a seven-year contract extension and a $700,000 raise.

Only two days ago, according to ESPN's Darren Rovell, that contract paid Strong a $291,667 bonus for guiding the Cardinals to the Sugar Bowl.

Yesterday Strong said he can't even promise that he'll accompany the team to New Orleans.

Yesterday Strong refused to convincingly confirm or deny that he has in the past, or will in the future, interview for a better job.

Yesterday Strong was "annoyed." He should have been grateful.

The only reason Tennessee, Auburn and Florida State might want Strong as their head coach is because Louisville wanted him first, when he was unproven and undesired.

According to an AOL FanHouse story from 2010, Kansas, Minnesota and Vanderbilt interviewed Strong and found him lacking. So did East Carolina.

According to a 2009 Orlando Sentinel story, Strong believed he wasn't getting a fair shake because he has black skin and a white wife.

But he got a fair shake from U of L, that's for sure.

We've already talked about the performances of Anton Gill and Terry Rozier over the weekend, but what Quentin Snider did on Saturday certainly warrants its own mention. Facing the No. 2 team in the country and the No. 1 point guard and No. 1 shooting guard (Kentucky commits Andrew and Aaron Harrison), Snider took the game over and nearly willed the Bruins to victory before they fell by two. Quentin, still just a junior, finished with a game-high 28 points.

We're getting an awfully good one.

I had my weekly incredibly depressing interaction with a Kentucky fan on Monday after he unprovokedly attacked me with insults of ACC football. A quick reminder that UK was 0-10 against the SEC, Big East and Sun Belt this season naturally led to a basketball response, and then to him dropping a "Blackbirds" reference.

For those who weren't aware, some Kentucky fans from the '70s (and '80s, '90s, 2000s and today, apparently) used to use "Blackbirds" as a racial slur for Louisville's predominantly African-American team. When his racism was pointed out, the man predictably went on the defensive, using what I like to call the "uneducated 13-year-old-defense." 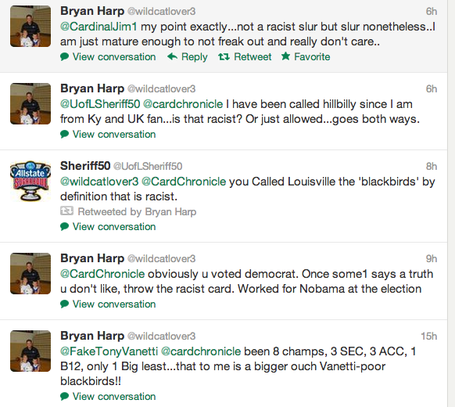 Thank God one of us is mature enough to handle tough political issues like ignorance and bigotry.

I wish everyone would chill out about coach #Geesh

Until the Strong situation is resolved, I'm now using "geesh" as a response to every reference.

I appeared on the David Glenn Show (guy who first broke the ACC news) last Friday to talk about Louisville's move to the ACC. You can listen to the interview right here.

Charleston students will be wearing these tonight: 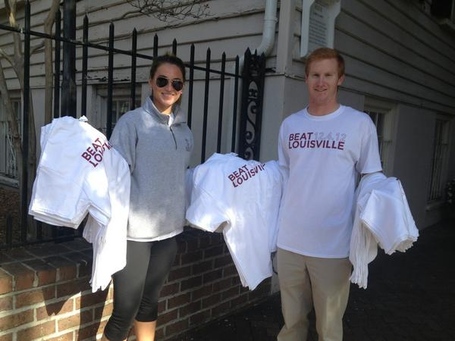 More on new U of L commit Finesse Middleton.

Dr. Dunkenstein himself believes that big things or in store for the future of the ACC Tournament.

Could the ACC Tournament be coming to Jay-Z's house down the road, too?

If you ask Louisville hoops legend Darrell Griffith, the answer is yes.

"You can write this down," Griffith told Louisville columnist Rick Bozich. "They're going to play their conference tournament at the Barclays Center. This league is made for exposure in New York City."

And finally, I think it's time for all of us to shift our focus back to what's really important...this video of Teddy Bridgewater dancing.

That guy's not going anywhere.