--Peyton Siva set a new career-high for made 3-pointers (5) and assists (12), and posted his first double-double since the season-opener against Manhattan. He was 5-for-8 from beyond the arc and did not attempt a two-point field goal. Siva was named Billy Minardi Classic MVP.

--Wayne Blackshear led all scorers with 18 points, matching the career-high he posted earlier this season against Charleston. Fifteen of Blackshear's points came in the first half. He was 4-for-8 from deep, and also finished with eight rebounds.

--Chane Behanan posted his first double-double of the season with 14 points and 11 rebounds. He finished 6-of-8 from the field.

--All but one of Louisville's 17 made field goals in the first half came off of assits. They finished the game with 23 assists and 31 made shots.

--The Louisville Cardinals are your 2012 Billy Minardi Classic champions. Take it to the printing press. 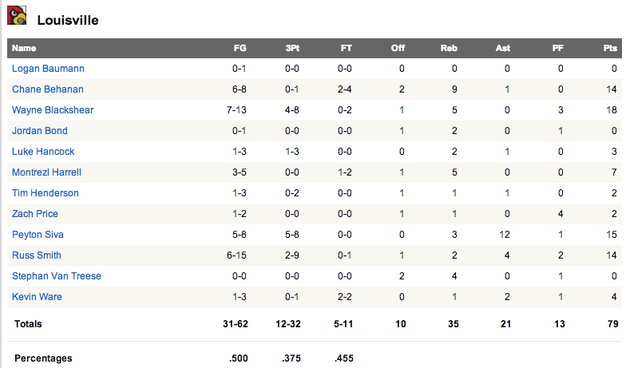