Share All sharing options for: Russ Smith Featured In This Week's Sports Illustrated

So that rumored Russ Smith Sports Illustrated feature has actually already been written and will run in this week's edition of the magazine.

More importantly, check out the photo (via story author Luke Winn) that's being attached to the feature. 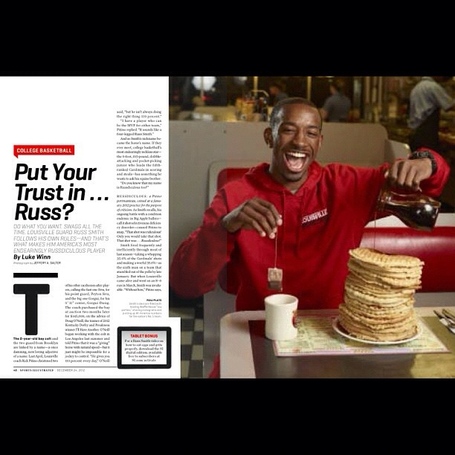 And now it all starts to make sense.

According to Winn, someone snapped the now infamous Russ/waffle shot during the SI shoot, and it became a CC meme before the magazine ever got to run with it. You can't expect to keep anything Russ Smith under wraps in his city.

There aren't many national college hoops writers who are suited to tackle a Russ piece, but Winn fits the bill better than anyone (see: Waffle House photo shoot).

This is the most eager I've been to read something since Matt Christopher was churning out classics. Hoping to see an online version of the story later today.