It's a good thing that sugar is labeled, or I'd be extremely worried about the CC Bird Mask.

Sooo stat guru Ken Pomery, one of the more respected names in college basketbal, says Russ Smith is his current choice for national Player of the Year.

3) Louisville 87, Memphis 78 [76]. (Saturday) The Cardinals at one point trailed 25-9, but overcame the deficit in hostile territory to win fairly comfortably. Russ Smith's line wasn't impressive until you consider he went 12-of-12 from the free throw line and also tried to dribble a basketball while doing a reverse somersault. I'll roll out the kPOY leaderboard in the coming days, but the sneak preview is that as of today he has a slight lead over Mason Plumlee.

On a related note, a few friends and I engaged in a VERY serious Friday night discussion about how "Russ on the Shelf" needs to overtake "Elf on the Shelf" in Louisville.

For starters, I've never liked the concept of Elf on the Shelf. It's creepy as hell and I feel like it unnecessarily speeds up childhood suspicions about Santa Claus. I mean, the fact that you never actually see Santa is one of the biggest parts of the allure. Now, there's a creepy ass lifeless elf watching a child's every move from inside their own home? It's not a narrative I can dig.

What I can dig, however, is a joyous mini-Russ Smith chilling on a mantle, television or what have you, and bringing holiday cheer to every home in The Ville. I don't care how tired you are, you can't eat your morning breakfast in a room with a Christmas tree and an elf Russ Smith and not be ready to tackle the day.

I think picking the expression for the Russ on the Shelf would be the biggest draw here. Every year a different family member could choose, or something. The possibilities really are endless.

If the time that has passed since Louisville's win over Rutgers has dampened your excitement about the Sugar Bowl, allow these player quotes to help pick you up.

"It would be huge. It would be the biggest win in the program's history," said senior offensive tackle Alex Kupper of a possible win over the Gators. "To be a part of that would be unbelievable; it would push us so far ahead of schedule and be huge for this program."

"I get a chance to play against my old team, my old school," said senior cornerback Adrian Bushell. "Not many people are picking us to win. We have an opportunity to do something that we have been working hard toward the whole season. We have gone through winter workouts, spring workouts, summer workouts, and now going through 12 games of the season, we get to face the No. 3 team in the nation."

"As a program, we set some goals out at the beginning of the season to be BIG EAST champs and try to make a bowl game," said Bushell. "Now, we are in a BCS bowl, and we are going to try and win it. We aren't going to lay down. We are going to give it all we got. For me, I was just excited when I saw the match-up. I just can't wait."

"The city is definitely excited," said Bushell. "There are more people out in the streets asking about the football team. There is definitely a buzz in the city, looking forward to the Sugar Bowl."

This is a couple weeks old now, but Chadd Scott discusses all the reasons why ACC fans will love the addition of Louisville.

You are the company you keep. A conference is a brotherhood. ACC fans will enjoy their association with the people of the University of Louisville. Who are these people?

To understand the fans and the Louisville people, you must understand the University. The University of Louisville, especially since World War II, was designed to serve non-traditional college students. UL was a commuter school. It attracted adults with jobs and children and responsibilities outside of beer bongs and Frisbee golf. It attracted racial minorities unwelcome elsewhere, part-time students, residents finishing degree programs begun elsewhere and those sampling secondary education, perhaps the first in their family to do so. Those students don't typically impress U.S. News and World Report.

The University of Louisville wasn't operating to attract national merit scholars and tenured professors earning $150,000 a year who spend only a fraction of their time in the classroom while they work on their fifth book no one has read. UL served the 34-year-old working mother of two who wants to complete her degree in order to earn a few thousand more dollars a year at work to support her family. That purpose is every bit as noble as the breathtaking research occurring at Duke or Georgia Tech.

The Louisville fans I've met, the Louisville people I've met, are representative of their University: good, decent, real, down-to-earth, easy-going, unpretentious, regular working people who love their Cardinals. No silver spoons here. No Reeds or Chivingtons or Garlands or Jaspers among this group. Lots of Marks and James and Franks and Tammys who love their Cardinals and exist in large enough numbers that Louisville will posses one of the biggest fan bases upon entering the ACC. UL won't be another BC or Wake or Georgia Tech or Miami - ACC schools with fan-bases so tiny as to embarrass the conference by their (lack of) attendance at championship games and bowls.

Turns out there was a surprise sixth visitor for Charlie Strong and company over the weekend: Oklahoma State cornerback commit Darius Curry. His Twitter timeline suggests that he enjoyed his visit very much.

For the folks headed down to New Orleans in a couple weeks, U of L basketball fan emcee Joey Wagner will be hosting an official Cards party on Jan. 1 at Bourbon Heat on Bourbon St from 10p.m.-4a.m. Tickets are 10 bucks and can be bought right here.

I can tell you that the Bourbon Heat party was definitely a blast during Final Four weekend. Belting out "We Found Love in a Gorgui Place" with dozens of likeminded Cardinal fans was a moment that will live forever...a very blurry forever.

Another event for fans headed South for New Year's.

The biggest thing I remember about the Orange Bowl Fan Fest was all the Louisville fans gathering to support the Big East and root on West Virginia as they came back to beat Georgia Tech in the Gator Bowl. Things have changed.

Jon Wilner's AP ballot, per usual, makes no sense. Although he has Louisville at No. 2 so I don't hate it.

Check out the top ten goals of the year from the Louisville soccer team:

The Arizona Cardinals are reportedly very eager to extend the contract of former Louisville Cardinal Kerry Rhodes through the 2015 season. The 30-year-old Rhodes ranks second on the team with four interceptions this season, and leads all defensive backs with 55 total tackles despite sitting out in Week 7 against Minnesota due to injury.

While U of L (and Cardinal fans) would love to host the ACC Tournament at the KFC Yum Center, it looks like the earliest that could happen is 2022.

The ACC has selected tournament sites for the next three years, and the deadline has passed for bids to host the event from 2016 to 2021, Karl Hicks, the ACC's senior associate commissioner for men's basketball operations, told Street & Smith's SportsBusiness Journal.

U of L executive senior associate athletic director Kevin Miller told SBJ that the university would be interested in hosting the ACC tournament, although there have not yet been any discussions about bidding.

U of L likely would jointly bid for the event with AEG Facilities, the Los Angeles-based firm that manages the Yum Center.

WFPL will have a special discussion at 1 p.m. Tuesday on what an NBA franchise would mean for Louisville. A lot of people have asked my opinion on this, and frankly I don't feel educated enough to give a response. This should be a good opportunity to start developing one. 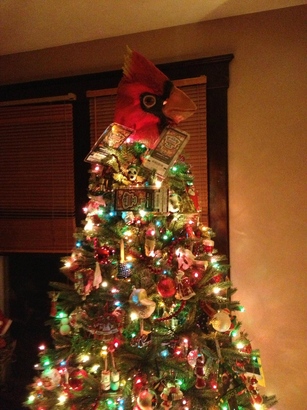 You know what would look perfect in that room? A Russ on the Shelf.

Conference USA is so bad this year that Louisville's win over Memphis may leave the Tigers in a situation where they have to win the league tournament in order to make the big dance. Heh.

Chuck Oliver says that losing Tom Jurich was the final nail in the Big East's coffin.

And finally, I'm back on the air and wearing a reindeer sweater with Mark Ennis from 6-8 tonight on ESPN 680. Listen anytime on ESPNLouisville.com.