Louisville Falls To No. 6 In New AP Poll

Share All sharing options for: Louisville Falls To No. 6 In New AP Poll

Apparently the Associated Press Top 25 voters won't be impressed until the Cards win by 100.

A week after dismantling College of Charleston and UMKC by scores of 80-38 and 99-47, the Louisville basketball team actually fell a spot from No. 5 to No. 6 in the new AP poll. U of L was displaced in the top five by unbeaten Florida, which was preceded in the rankings by Syracuse, Michigan, Duke and No. 1 Indiana.

The top five is the same over at the USA Today Poll, where Louisville resides at No. 6 for a second straight week.

Memphis, Louisville's opponent on Saturday, did not receive a vote in either poll for the first time this season.

Here are your full rankings for this week: 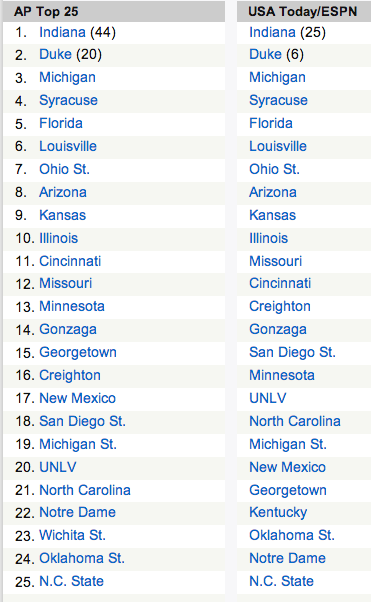