Are we as good as we think? It is way, way too early to tell. Let's try to get a better idea of how the season will go after a few weeks. For now: let's just focus on the Jaspers.

Between the lofty predictions of roughly 50,000 different college sports analysts/websites/magazines, the long, nationally published profiles of our lovable players and Mike's heartfelt and eloquent season preview earlier today, there's not a lot more that can be said about the 2012-2013 Louisville Cardinal basketball team. And with the season the football team is having, it almost feels like there is just too much for one fanbase to take in right now. The good feelings, excitement, anticipation, talent, positive results and, honestly, fear/nervousness are at all time highs. The state of Louisville sports is so intense right now even the Petrino-to-UK talk feels like throwing a few dimes into Scrooge McDuck's indoor gold coin swimming pool.

So when I sat down to write this, I realized we had not done any sort of detailed pre-season analysis. I didn't even know where to begin. I even lamely tried to engage hothot and Mike in a gimmicky email exchange, but it didn't really click. So two thoughts sorta crystallized: 1) "precious present/long season/long game" and 2) legendary UofL Law School Torts professor Ron Eades.

When I started law school, they had a 2-day orientation that included all sorts of talk of outlining, briefing cases for class, hornbooks, the Socratic method, finals, IRAC (or CRAC as some weirdos called it) and a lot of other stuff that sounded vaguely familiar but didn't make any sense. Finally Eades gets up and says, they never listen to me. I always tell them that we should start school and then about 3 weeks in do orientation, because by then some of what you've heard to day will mean something to you and might be actually helpful. Brilliant. 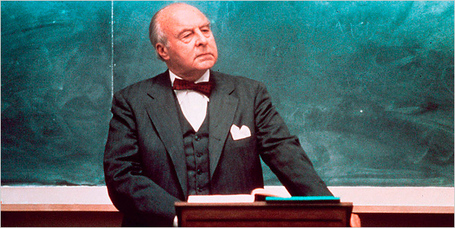 Not Ron Eades via 25.media.tumblr.com

So let's do this. Our mantra this football season has been "it's a long game" - this year more than ever I've tried to stop letting the potential outcome become concrete in my head in the 2nd or even 3rd quarter. There's no reason to say "this game is over, we have lost" and there's no reason to say "game over, we've got this one, put in Stein and Corvin Lamb" in the 2nd, 3rd or even 4th quarter.

This lesson is carried over from last year. I'll admit the last month or two of the season really did a number on me. The combination of injuries, a cold streak, frustrated fans, UK's success and the grind-it-out style of our opponents made me miserable and had me ready to just get it over with and move onto this season. Boy was I wrong. Games don't end until after :01 in the 4th quarter, and seasons don't end until your team loses its last game, and everything in between is important and matters and we should be thankful for it. To wit:

So whatever happens Sunday or the first few games or even Bermuda (you know football is going well when you keep forgetting the caliber of teams we are playing in just a few weeks), just remember it is a long season. Whatever happens in the first half, it is a long game. Whatever happens against Syracuse in football, we still have a lot more football to enjoy. So this will not be a detailed preview of the 2012-2013 Louisville Basketball Cardinals because my god they might be the best team in the country and shut up you are going to ruin it don't say anything. 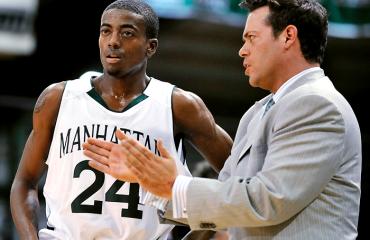 Former Louisville assistant Steve Masiello led the Jaspers to their first 20-win season since the mid-2000s. Pre-season All-MAAC first teamer George Beamon returns for his senior season after leading the team in points and steals last year, and tying for the team lead in rebounds. He was the only Jasper to average double figures last year, but a balanced group of players return, including sophomore Emmy Andujar, juniors Michael Alvarado and Rhamel Brown and senior Roberto Colonette. The only non-New York area player on their roster is sophomore Donovan Kates from Hopkinsville. Kates played a solid 16.6 minutes per game last year, averaging 5 points and 1.8 rebounds.

Unfortunately for Manhattan, none of these guys is biger than 6'7", and 3 of them are 6'4" or smaller.

According to KenPom.com's rankings, Manhattan is the 130th best team in the country, with a balance between offense and defense. Of course, stats can't take into account the potential growth in the second season under a new coach, especially one like Masiello who is likely implementing a system much like ours/Pitino's.

First Basket: Beamon. The Jaspers try to get their best player going early and he takes Hancock off the dribble for a quick 2.

First Cardinals Basket: Gorgui from the elbow. Why not?

Biggest Opponent Lead: 8-2, followed by murmurs, supportive cheers and a dunk from Chane.

Cardinal MVP: The easy pick is Gorgui because of the size advantage. But Masiello knows our team really well and will pack things in down low and make us shoot the ball. I'm going out on a limb and saying Kevin Ware hits a couple 3s to open things up. He was trying way too hard the other night against Bellarmine, and hopefully has gotten that out of his system.

Hyper-Specific, Random Prediction: Someone will throw Montrezl an alley oop and it will sail out of bounds.

Ultimate Outcome: Louisville wins going away. I guess? I really have no idea.