Rowan "Oben" Bledsoe designed the concept for this photo herself. She's as demanding as she is talented. You'll hate every second of working with her, but it will be the most rewarding experience of your life.

A college basketball season in which Louisville has as much of a shot as anyone at winning the national title begins tomorrow. That is all.

Yet another really good story on Teddy Bridgewater from Sports Illustrated.

Watson estimates Bridgewater sits at 96 or 97 percent efficiency in making correct checks in 2012, up from around 80 percent as a freshman. Three of Louisville's seven "explosive" runs against Temple last weekend resulted directly from Bridgewater's adjustments. When the quarterback plays mind games like that, it is felt throughout the entire roster. "Doing more has allowed his teammates to believe in him even more," said safety Jermaine Reve, another one of Bridgewater's friends since fourth grade. "Everyone on the team just expects the offense to go out there and score, because we have the capability of doing it."

Louisville's success, in large part, has stemmed from that team-wide belief. When a two-minute drive was needed against Cincinnati, Bridgewater gathered his offense and told them: This is what we do. Louisville scored. When five inches of rain pummeled the Cardinals at Southern Miss, Bridgewater informed his line and receivers it was time to grind one out. He threw just 13 passes. Louisville surged on. When the Cardinals amassed a 29-point halftime lead against North Carolina, Bridgewater demanded everyone treat the game like it was scoreless. The urgency helped offset a furious Tar Heels comeback. Louisville survived.

The only issue I have with the piece is the claim that Louisville fans booed Bridgewater after he threw his first interception against Murray State. I was there, and that definitely didn't happen. If anything, U of L fans were upset that they didn't see more of Teddy.

Auburn's 247.com site is apparently reporting that if the Tigers end up replacing Gene Chizik after this season, that U of L offensive coordinator Shawn Watson could be one of the top candidates. I love what Coach Wats has done here over the past two years, but if AU is targeting a Louisville coach I'll be honest and say I'm happy to hear that it's anyone other than Strong.

Bridgewater, a sophomore, has led the Cardinals to a 9-0 record and he's inching into the Heisman conversation. He has passed for 2,434 yards and 18 touchdowns, throwing only four interceptions.

In Louisville's 45-17 victory over Temple Saturday, Bridgewater was 19 of 28 for 324 yards and five touchdowns. As Marrone watched video of his next opponent, he was struck by how good Bridgewater has become.

"He's really gotten a lot better," Marrone said. "He can extend plays and still keep his eyes down field. ...

He has a very, very good control and grasp of what's going on. He's a play maker. It seems that the tougher the situation gets for him, the more calm and relaxed he is."

Louisville is the top overall seed in SB Nation's preseason Bracketology, and the No. 2 team in its preseason top 25.

Wednesday night was a big one for U of L commit Terry Rozier, who dropped 32 points in a Hargrave Military victory. I think Rick Pitino would have liked to have had him in the Yum Center.

Check out Ian Klarer's latest piece of art just in time for the start of the 2012-13 hoops season. 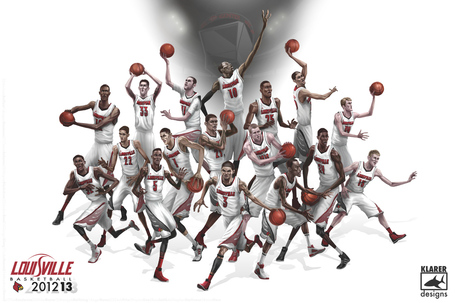 ESPN writes something inaccurate about Louisville for the billionth time over the past two months.

The always fantastic Troy Nunes is an Absolute Magician says Syracuse has no reason to be afraid of the ninth-ranked Cardinals of Louisville.

While their records and levels of success have been quite different, Syracuse and Louisville share one commonality - they play close games. I don't expect anything different to occur in the Carrier Dome on Saturday.

Collectively, Syracuse fans seem to be fairly confident about their chances on Saturday.

Normally, when I see "9th-ranked" and "9-0" in a sentence pertaining to Syracuse football, I get into my familiar fetal pose, and rock gently back and forth waiting for kickoff. However, when I see the words "Louisville Cardinals" in a sentence pertaining to Syracuse Orange football, I become strangely confident...cocky if you will. For this is the very team that got Grobbered-on...twice.... by our own Master of Disaster. Let's hope that hoodoo is alive and well in the Dome in a few day's time.

Right now you can buy U of L flip flops for three bucks. Just throwin' it out there. 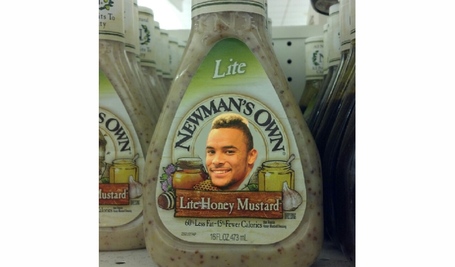 Pat Forde says Peyton Siva is the third most intriguing player in college basketball this season.

3. Peyton Siva, Louisville point guard: Charismatic little man is the team's bellwether. When he struggles (like much of last season), the Cardinals are fairly ordinary. When he's playing well (like last March), the Cardinals are almost impossible to beat. If Siva is locked in for the entirety of his senior year, it will end in Atlanta in April.

All things Kragsidered, it's pretty cool to be saying that.

Also of note is that Bobby Petrino is currently listed as the 2/1 favorite to be the head football coach at Kentucky next year.

I'm told ESPN's Todd McShay put Louisville on "Upset Alert" at some point today. Well then I guess there's no point in making the trip.

Our good friend Eric Wood is apparently suffering from a boner this week. 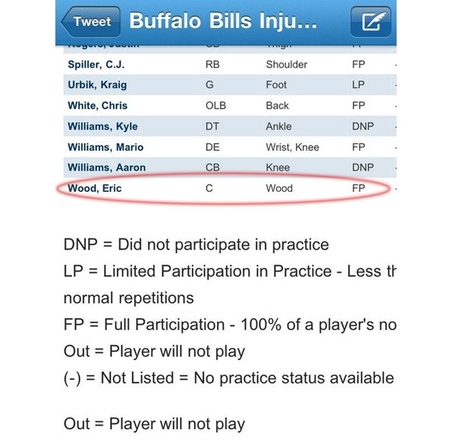 It's natural, buddy, don't let any of the other guys on the team give you any sh-t. They're just jealous and confused.

Matt McClusky details how Syracuse will beat Louisville on Saturday.

How will SU do it? Teddy Bridgewater is a problem. The Cards defense has been fairly stout this season, especially when it matters, but, most importantly, Syracuse will have to get out of Syracuse's way to win a game like this. This battle is likely to be close, tough, and a classic "hard fought" game. But the only way the Orange win is if it STOPS committing penalties and STOPS turning the ball over and STOPS screwing up on special teams. Of course, limiting Bridgewater and exposing the Cards defense will also be just as important.

But, mainly, the biggest key for any Syracuse game is for the Orange players not to take themselves out of it. Like they have all year. Like they have for the majority of Marrone's tenure. Should SU actually not commit the stupid plays this game should come down to the final few possessions, and that right there is pretty much a victory.

The closer it gets, the more terrified I am of this game.

Kentucky is No. 2 in CBS' "Top 25 +1" preseason countdown (Indiana was No. 3), which means Louisville will be unveiled as the network's preseason No. 1 tomorrow.

Yeah, I'm not totally sold on Louisville, people. As you'll see, they were picked as our preseason No. 1 team in the country by Parrish and Goodman, but I don't know. Can the offense really improve from last season? (It was 12th in the league, per possession.) That's my question. All computer models are relatively down on the Cardinals, too, so that makes me pause. And let's be clear here: I'm not saying Louisville won't be good. It's going to be very good. It's going to, at worst, be a four seed in the tournament. But I don't think it's clearly a top-five team in the country. Russ Smith is a character -- but he also takes stupid shots. That gonna continue? I also think Peyton Siva has managed to become an overrated player, and I've yet to see Wayne Blackshear be the kind of force I've heard he can be. So while I like a lot about Louisville, sometimes we need to push back to give a balance. That's all I'm doing here. Second place in the Big East and forecasting soft two/hard three seed is pragmatic enough.

Jen Smith of the Lexington Herald-Leader filed an open records request to see what the actual attendance numbers were for Kentucky football games played at Commonwealth Stadium this year, and here's what she found out:

That is equal parts incredible and sad.

The NBC Sports college hoops crew debates who's the best team out of Louisville, Indiana and Kentucky. In basketball. In football, it's...yeah, it's Louisville.

DePaul has four new uniforms and now the team thinks it's the 1990 UNLV Runnin' Rebels.

"The new uniforms are very nice," said Morgan, a 6-foot, 6-inch junior forward. "I like the tight fit and all the different colors we have. People will remember these were the uniforms we wore for our turnaround year."

"I like the red uniforms because it's a color nobody has seen at this school," Morgan said. "You know, different uniforms mean a different kind of team. The new uniforms will bring a positive energy to the university.

"It feels like this is the year we turn the program around."

Back to being cute.

"I believe this is the year we get a lot of wins and qualify for postseason play," Morgan said. "With the experience we have and coach Oliver Purnell and his staff in their third year, this is when we turn it all around."

Louisville has been the top market for college basketball in each of the past 10 years.

ESPN's Dari Nowkah talks down to the rest of the country while explaining (video) how ESPN doesn't have a bias against any team.

He then slips into his off-air outfit.

Honestly, it'd be better for them to admit that they do have a bias at this point, because otherwise all these mistakes just mean they're really shitty at their jobs.

Jared Swopshire scored nine points and grabbed five rebounds in Northwestern's exhibition victory last night. In an ode to his former team, Swop missed all four of his 3-point attempts.

Syracuse running back Adonis Ameen-Moore will be back on the field against Louisville after missing the last two games because of injury. He scored a touchdown in each of the Orange's first three games.

And finally, Louisville is the only team to make the predicted Final Four of all three Sports Illustrated experts. The Cards are SI writer Pete Thamel's pick to win it all.