Share All sharing options for: Louisville Vs. Bellarmine Preview

Series History: Louisville has won all 12 regular season meetings with Bellarmine, and has notched exhibition victories in 2005, 2009 and 2011 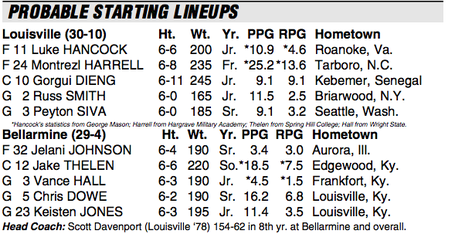 --The Fighting Mike Rutherfords are the preseason No. 9 team in Division II, and the favorites to win the East Division of the Great Lakes Valley Conference.

--They were dealt a blow in the offseason when point guard and former GLVC Player of the Year Jeremy Kendle opted to forgo his final year of eligibility to play professionally.

--The Knights were defeated by Cincinnati 86-51 in an exhibition game on Monday.

--BU center Jake Thelen is a transfer from Spring Hill College, where he averaged 18.5 points and 7.5 boards as a freshman last season.

--This is a team what will be very competitive once again in the GLVC, but without Kendle and reigning league MVP Braydon Hobbs, it's hard to see them being as formidable as they've been the past three seasons.

U of L Ties With Bellarmine:

--U of L Director of Video Operations Doug Davenport played four years at Bellarmine under his father Scott when the Knights reached a pair of NCAA Tournaments.

--CardChronicle.com blogger Mike Rutherford received his bachelor's degree from Bellarmine, where he posted moderate grades and made consistently tremendous jokes in his head during class.

--BU assistant coach Reece Gaines was an All-American at Louisville, and ranks fourth on the Cards' all-time scoring list (1,945 points).

The last three times Louisville has faced Bellarmine in exhibition, the Knights have entered the game with realistic expectations of pulling the upset...and they've come fairly close. I don't think that's going to be the case this evening.

Still, the athletic Knight backcourt of Dowe and fellow Louisville native Keisten Jones should provide a far stiffer test for Peyton Siva and Russ Smith than Pikeville did. The Knights don't start a player taller than 6'6, so expect more impressive statistics from Montrezl Harrell and Gorgui Dieng.

The big question, obviously, is what Jordan Bond has planned for an encore.