That's Ryan Sanders at the summit of Uncompaghre Peak at 14,309 feet in Colorado. You might think is a basic U of L fan pic, but Ryan actually made the trek with the sole purpose of accurately portraying the distance between the Louisville and Kentucky football programs at the present time. He's very artsy, and very committed.

The big news of the evening is Rick Pitino saying on his weekly radio show that Chane Behanan will play against Manhattan on Sunday. Pitino says Montrezl Harrell will still start at power forward.

Sports Illustrated breaks down No. 2 Louisville and the odd phenomenon of Chane Behanan being both a senior and a classmate of sophomore Wayne Blackshear.

Dieng is the most complete big man in the Big East. The 6-10 defensive menace topped four blocked shots per game last season and averaged nearly a double-double (9.1 ppg, 9.1 rpg) last season. Behanan, a senior, finished last season like a veteran, averaging 13.2 points and 8.0 rebounds in five NCAA tournament games while making 60 percent of his shots. He should team with his best friend, fellow sophomore Wayne Blackshear, to give Pitino the inside-outside blend the coach loves. Blackshear and junior Luke Hancock will form a hybrid combo on the wing -- both are capable of playing either small forward or shooting guard.

Though his confidence was shaken after an ankle injury, Siva excelled in the postseason, improving his shot selection and leadership skills. Fellow starting guard Russ Smith led Louisville in field goal attempts last season, although he made only 35.6 percent. Smith needs to remain a creative shotmaker, but keep learning to share the ball. Kevin Ware should be the first backcourt reserve, but he did not make a three-point shot last season. Pitino believes sophomore Angel Nunez could become a dependable three-point threat.

U of L is still a No. 1 seed in Joe Lunardi's final preseason Bracketology. I only do this because I know you guys enjoy talking about it. It's like buying your kid that video game or toy you hate on Christmas. A little piece of me dies so that you can feel an even smaller amount of joy.

ESPN's new college football power poll has Louisville at No. 11, and praises the 9-0 Cards for winning their...sixth?...consecutive game. I guess that's technically accurate.

Just call them the comeback Cardinals, as Louisville rallied to win its sixth consecutive game. The Cards are tied with Rutgers for first in the Big East and visit Syracuse on Saturday.

I think they're meaning to say that U of L came from behind to win a game for the sixth straight time, they just didn't word it very well. Still, "comeback Cards" is sort of an interesting angle to take in the wake of a 45-17 win that really wasn't ever in question after the midway point of the 2nd quarter.

Syracuse knows that Saturday's game is their last chance to make something big out of this season.

Just in case you were getting tired of the old Jim Boeheim nose pick image... 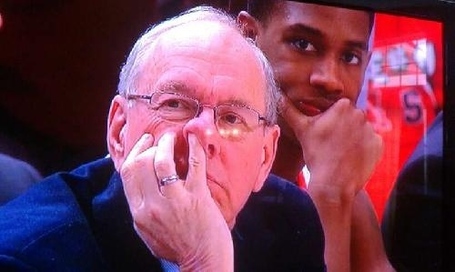 That thing is way up there.

The little girl running back who absolutely tears up all the boys she plays against is probably the coolest thing on the Internet today.

The Louisville women's soccer team had its collective heart broken on Monday when the 2012 NCAA Tournament field was unveiled and the Cards were not in it. U of L finished the season with a 10-4-4 record and an RPI of 39, that's two spots better than a Rutgers team which did make the field of 48.

The BlogPoll still doesn't have much love for Louisville, sliding the Cardinals up just a spot to No. 11. Two voters - Bearcats Blog (Cincinnati) and Hammer and Rails (Purdue) - have U of L at No. 5, while Good Bull Hunting (Texas A&M) has the Cards all the way down at No. 18.

The Courier-Journal is now aware that Louisville played Temple and not Pitt in its last football game, but unaware that the game took place on a Saturday. 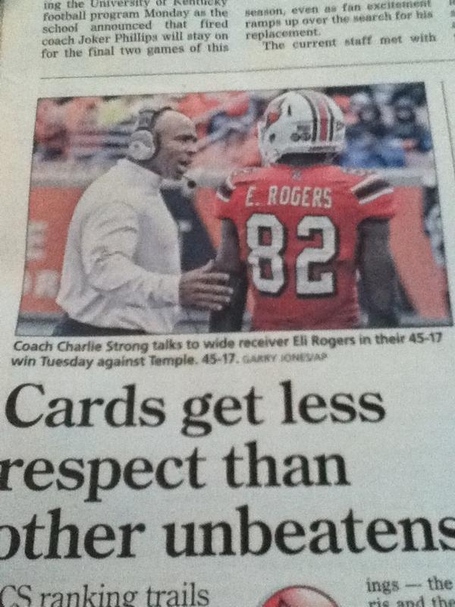 Tuesday would be today. Don't let anyone ever tell you that newspapers are no longer timely.

Local artist B Simm of "You Don't Want These Cards" fame has released a new mix tape. For a limited time, you can download the U of L football anthem and the rest of his tape for free.

So to punish Indiana for its rule-breaking, the NCAA is temporarily taking away Peter Jurkin. Basically, the NCAA is every woman in a relationship ever.

Video of U of L commit Anton Gill dropping 24 in a recent win over Guilford Tech.

More info on the Boy Meets World sequel, which will be titled Girl Meets World. If you thought the casting for Harry Potter was big...this "girl" better be Joan Crawford reincarnated.

Jerry Smith, who is currently playing in Italy, has been sidelined with a foot injury.

Thanks to everyone for sending me pictures of their write-in candidates even though it's apparently against the law in Kentucky to take pictures of voting ballots. 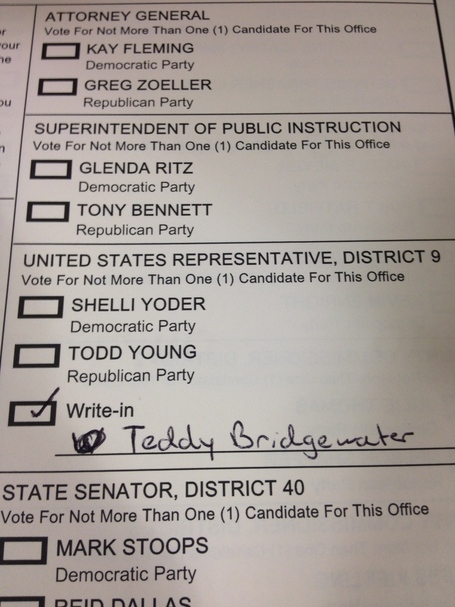 Against the law you say? Hold that thought for a second while I phone my good friend, District 9 Rep. Teddy Bridgewater.

This is what happens when you don't make me a Colonel...and when I don't get an "I voted" sticker. It's like you're deliberately pushing me towards criminal behavior, Kentucky.

Checking out the CC page on Facebook is almost always a depressing endeavor. For example, check out the two most recent comments on the Peyton Siva SI cover post.

The most frustrating part about dealing with "people" on the Internet is that they so often qualify their confusing and grammatically incorrect statements with things like "just a thought!" or "facts r facts!" The only thing those statements communicate to me is that it's not even close to being worth the effort.

I love people so much more in real life.

The Associated Press' U of L/'Cuse preview is out.

Andrea Adelson outlines some of the reasons Louisville should be very wary of this weekend's trip to the North.

This will be the final home game of the season for the Orange, and the game is about as close to a must-win as you can get. Syracuse (4-5, 3-2), beset by countless mistakes in its five losses this season, needs to win two of its final three games to go back to a bowl game.

John Clay says the initial dreams U of L fans had about domination under Rick Pitino may yet come to fruition.

A pair of USA Today writers have Louisville in their respective Final Fours.

The UK football coaching search is already getting fun to watch. First up: a coach of a top 20 team with three regular season games still to play is going to leave his team this week to go ahead and get to work in Lexington. '

This whole thing is going to be fantastic.

And finally, Louisville remains a 2.5 point favorite over Syracuse. Forecast calls for rain, snow and falling Eric Devendorf clones...all inside the Carrier Dome.