Your complete game wrap post from one of the biggest nights in Louisville football history.

This is a 48 hour stretch that we will be discussing for...well forever, really.

A day after the Atlantic Coast Conference voted to add Louisville as its newest member, the Cardinal football team pulled off one of the more improbable second half comebacks in the program's history.

On the surface, it doesn't look like "improbable" really fits in the previous sentence. Rutgers was only a three-point favorite in last night's game, and a 14-3 halftime lead can never accurately be described as insurmountable. Still, anyone who watched the game's opening two quarters can tell you how bleak things looked for the visitors.

Louisville's best and most important player didn't see the field in the first quarter, but tried to give it a go in the second on one leg and with one arm. Predictably, the Cardinal offense did not shine. The U of L defense fared slightly better against the far-from-formidable Rutgers offense, but a few missed tackles on two huge plays allowed the Scarlet Knights to seize a two score lead.

What followed was...well I'm still not really sure what it was, other than incredible.

The Cardinal defense tightened up, the one-armed, one-legged quarterback made big throw after big throw, Terrell Floyd made arguably the game's biggest play by forcing a fumble on a kick return, and suddenly Louisville was headed to the BCS.

I remember a lot of hugging and cheering. I remember it being very fun. Outside of that I feel like I kind of blacked out.

People will be talking about last night (and this week) forever. I'm glad we all got to share in the fun together.

Nobody deserved their moment in the national spotlight more than Teddy Bridgewater. The kid has done absolutely everything that's been asked of him, and he's done it the right way since the day he arrived on campus.

From remaining supportive after Will Stein was named the starting quarterback at the beginning of last season, to seizing the moment when he got his chance at Kentucky, to dedicating himself to getting smarter and stronger this offseason, to emerging as a Heisman Trophy candidate at the beginning of his sophomore year, to playing through the pain and giving one of the more memorable individual performances I think any of us have ever witnessed; there is no question that we are watching one of the most special players to ever put on a Louisville uniform. 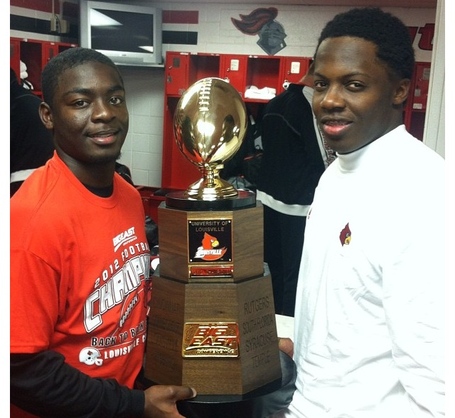 We could probably go on for another 5,000 words or so, but for now we'll move on.

The mood on Twitter turned decisively negative when it was announced that Will Stein would be starting in place of Bridgewater last night. 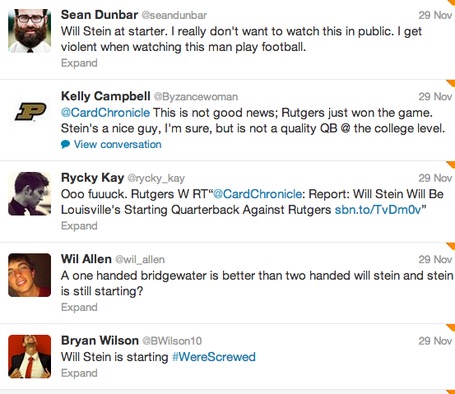 Despite all the doubters, Stein was pretty fantastic, hitting on 8-of-11 passes and converting on six third downs when he was in the game. It's true that he was at the helm of multiple stalled drives at the beginning of the game, but none of the blame for those flameouts can be placed on him. He did everything that was asked of him, and his intensity after picking up that 3rd and 1 in the 4th quarter was one of the more fantastic moments of the night.

Stein is the embodiment of a true team player, and the story his career at Louisville should be utilized by parents and youth sports coaches alike. I couldn't be happier that he played such a large role in what was probably the biggest win U of L's had since he's been here. 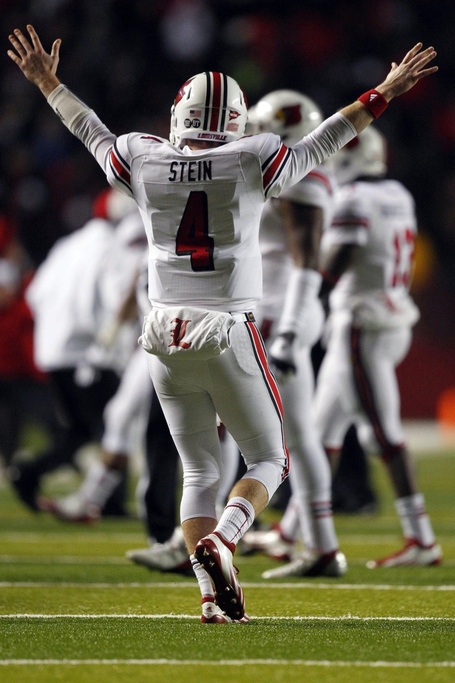 If you didn't already, I think the time has come to believe in Santa Strong.

Aside from two big plays (and two plays that would have been big had they not been dropped by Rutgers receivers), the defense was tremendous all night.

Calvin Pryor has been one of the best tacklers on the team for two seasons now, which is why it was so surprising to see him go for the big hit instead of wrapping up on that first play of the game. It was a mistake that wouldn't be made again as Pryor would up leading the team in tackles. He also recovered that key fumble on the kickoff and made a tremendous pass breakup in the 4th quarter.

Marcus Smith and Lorenzo Mauldin were very good, even if the final box score doesn't reflect that. They both forced Gary Nova to rush throws, and their presence in the backfield got in his head early on in the game. It's really, really noticeable how much better this defense is with Mauldin healthy and playing major snaps.

The fake field goal/penalty was one of the more bizarre plays I can remember. The play was so slow to develop and it looked like Louisville was in perfect position to defend it. Marcus Smith was all over the intended receiver for about three seconds...and then he just let him go.

I really wish I had video of our various reactions during the play because there were about 25 different statements screamed very passionately.

The mood was extremely bleak inside Card Chronicle Headquarters at halftime, until I saw this tweet and read it out loud.

@cardchronicle Fat Wayne is crushing wings at Hooters, should I send him a salad?

Brought the house down and really changed the whole mood of the night.

I also made a sock switch at halftime. You're all welcome.

Additional credit for the victory must go to Shmaniel Shmudd for showing up at halftime after a "work disaster," and to the infamous Dan for a rousing rendition of "Champagne Gary Nova" that really lifted a lot of spirits.

Has anyone done more for the non-hooded sweatshirt than Charlie Strong? Dead serious question.

A quick move to the video portion of the wrap-up.

Some solid on-field footage of the end of the game and the postgame celebration (Charlie F Bomb included).

Terrell Floyd reminds me of former Cardinal safety Jon Russell, and not just because of the hair. His contributions never seem that noteworthy, and then out of the blue he'll make the biggest play or two plays of the game. Such was the case last night with his forced fumble and game-sealing interception.

I never thought a Teddy to DeVante moment could top the one we saw in Lexington two Septembers ago, but last night's did the trick. It was the perfect time to take a shot, Teddy put the ball in the only place he could, and DeVante did what DeVante does.

Fifteen of Parker's 56 career receptions have now gone for touchdowns. That's better than one out of every four (math). It's also a mark which puts him tied with Harry Douglas for eighth on U of L's all-time TD receptions list. Not bad company for a sophomore to be keeping.

The morning headline in Jersey. 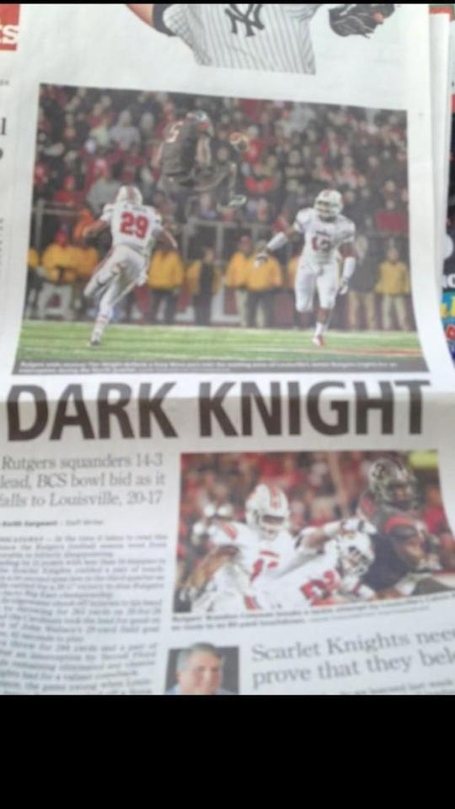 Overlooked in all of this was John Wallace, a redshirt freshman, stepping up and drilling a kick with the game hanging in the balance. He also continued to do a good job of kicking the ball towards the corner on kickoffs, where the coverage has been greatly improved in recent weeks.

Adrian Bushell is very good. Even the time he was "beaten" down the sideline he was stil lin good position, he's just six inches shorter than Mark Harrison.

I went out did some mild celebrating last night before cabbing it home and seeing that the game replay was on ESPN. Suffice it to say I ended up staying up until 5.

You have to saver these moments when they happen.

I hate to be negative at all in this post, but...and you know what I'm about to say....the 3rd and 1 and 4th and 1 playcalling. The sneaks and dives have been working at about a 9% success rate over the past three seasons, and everyone but the Cardinal coaches seems to realize that. More bootleg, hell more shotgun, but definitely less trying to block 10 defenders with seven people. The odds aren't on your side.

Nice to see the Big East championship trophy was comfy on its way back to the Derby City. 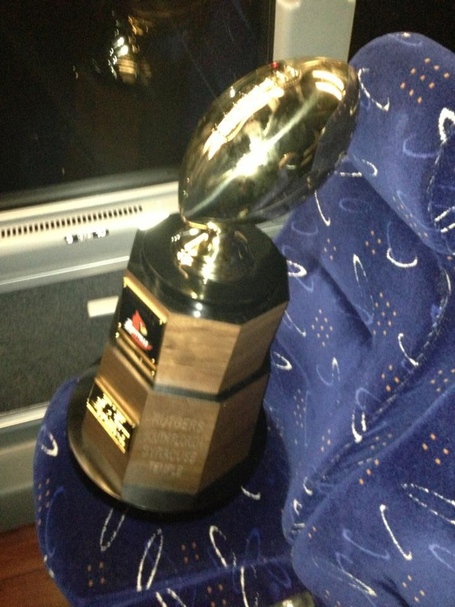 I loved hearing about the fans making it out to Papa John's to welcome the team back in the wee hours of the morning. We haven't had a night like that in a long time, and kudos to the college kids (and post-college kids) who seized the moment.

How solid is Honey Mustard? The guy has been an absolute rock for us all year and last night was no exception.

It would have been interesting to see whether or not Corvin Lamb would have been able to keep it rolling had he not tweaked his hamstring. He was extremely impressive on his first series, and I have to imagine he'll figure fairly heavily into the Sugar/Orange Bowl gameplan.

Also, how sore is Jeremy Wright today? That Rutgers defense isn't just impressive on paper. They're the real deal.

After a fairly quiet stretch, Pooda had two enormous catches last night. The first was the 3rd and 12 pass from Teddy that seemed to hang in the air forever. He did a terrific job of adjusting his body and locating the ball. If I attempted that I would have either fallen or missed with both hands by three feet. That's why I don't play wide receiver for Louisville...the only reason why.

I'm just typing Pooda one more time because it makes me feel good.

Also, I love you but you're going to give me a heart attack, Kai. 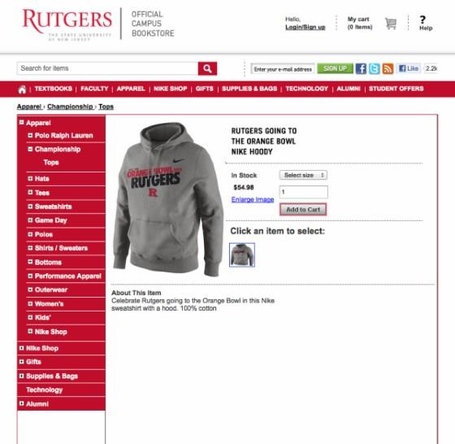 How many people did Rutgers have on its sideline? At soe point you have to stop feeling special when you look around and see that the entire state of New Jersey is on the field with you.

The Will Stein touch throw to Nick Heuser on third and short warrants its own nugget. Which is why it just got exactly that.

If you have the time and the means, I highly suggest making the trip down to Miami or New Orleans. I made a last second move to go to the Orange Bowl six years ago, and it wound up being one of the best decisions I've ever made. These chances don't come around all that often, something we all found out the hard way quickly after that 2006 season.

In closing: what a night, what a week, and what a time to be a Louisville Cardinals fan.

This next month figures to be sensational.