It's game day in Louisville once again, as the mighty Cardinals look to improve to 9-0 for the first time in program history by defeating visiting Temple.

Share All sharing options for: Game Day: Louisville Vs. Temple 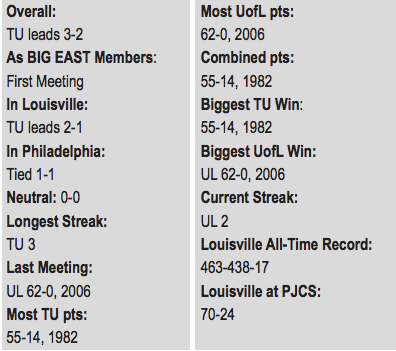 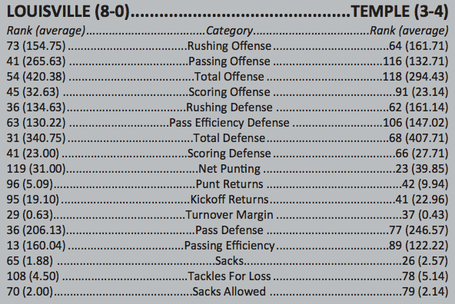 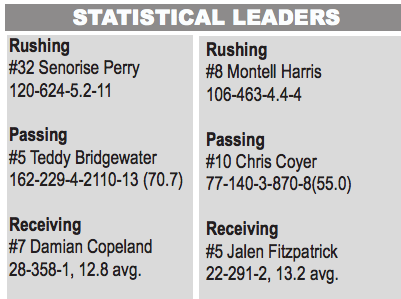 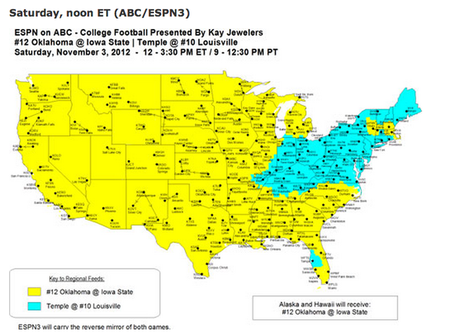 Because it's never too early for the pairing of George Stripling and Disturbed.

Toastin' to the new Cards, "this one is for history."

A Bubba Sparxx remix on the excitement level meter this morning. Not something you're going to see/read every game day.

But seriously, I'm excited. Second-to-last home game of the year, perfect season still in tact, chance to see what no Louisville fan has ever seen before (a cardinal team improve to 9-0) in person; plenty of reasons to be up for this one.

Pregame Meal: Assorted breakfast foods and beer. There's been talk of Bloody Marys and Mimosas, but I'm going to go out on a pretty thick limb and say that the talk never becomes anything more than that. Everyone's a little rusty on the noon tailgate front. About one-hundred and fifty percent ready for rain, though.

Sticking with last week's Cincinnati combo. Making the unavoidable transition from warm-weather home attire to cold-weather home attire is a delicate in-season process, but that delicacy reaches a new level when there's an undefeated season on the line. You have to take a portion of what worked during the early part of the season and blend it perfectly with the necessary cold weather garments. I feel like I struck a balance that worked last week and I'm not going to be changing it unless the Cards taste defeat.

Bold Prediction: Louisville does not attempt a field goal in the game.

Couldn't have swung and missed any harder over the last few weeks. I mean, "someone beside Teddy Bridgewater will throw a pass for Louisville?" The f--k was that? If this one doesn't land then I might just have to go with "Senorise Perry will rush for at least three yards" next week in a desperate attempt to save a little face.

God I miss the "Dom Brown will attempt a pass" days. You knew you were going to be right eventually.

Why fight it? Kid now has 10 TD catches in less than two seasons and is averaging a ridiculous 35.8 yards per touchdown reception. He goes off again today and becomes one of the bigger stories of the Big East season.

That's right, the TTPAL now includes a color with a built-in prediction. It's evolving on us.

--Louisville enters Saturday's game at 8-0 for just the third time in program history. A win would move Louisville to 9-0 for the first time ever.

--A win over Temple would also make Louisville 4-0 in the Big East for the first time ever.

--Saturday will mark the first time Louisville has taken the field with a top ten national ranking since Sept. 15, 2007.

--Saturday's game represents the sixth meeting and the first as members of the Big East. The series began in 1980 and the Owls own a 3-2 advantage.

--At 8-0, Louisville is one of just six remaining unbeaten teams in Division-I (FBS).

--Temple has lost its last 27 games against ranked opponents. Their last victory over a top 25 team came against Virginia Tech in 1998.

--Remember that 2002 NIT game against Temple when everyone kept slipping because the floor was wet, and Lynn Greer was really good, and we lost? Yeah, I didn't like that.

--Temple has not thrown for more than 200 yards in a game this season.

--Temple has played 21 freshmen this season, 13 of them true freshmen. It has only 13 seniors on its roster.

--U of L has won back-to-back games by less than four points for the first time since 1994.

--Louisville is 21-4 under head coach Charlie Strong when scoring 20 or more points.

--Louisville has trailed at halftime in three of its last four games.

--Louisville is 12-3 in the Charlie Strong era when holding opponents to less than 20 points.

--Louisville has scored at least 20 points in 11 straight games.

--U of L is looking to win six straight home games for the first time since their 20-game home winning streak was snapped in 2007.

--"We're playing a top-ranked team. The top-ranked team in the conference and probably in the loudest stadium we'll play in. We're pretty dinged up mentally and physically. But I'm glad we're on the road playing them right now, it's a chance to respond and make a statement." --Temple coach Steve Addazio

--"There's no pressure on us. Sometimes the best thing you can have is a great challenge because it gives you an opportunity for a big result." --Temple coach Steve Addazio

--"We realize we're on the path and setting goals that this school has never seen before. We're very excited, just fighting to stay humble." --Deiontrez Mount

--"Anybody can get beat on any day. It's definitely a reminder - anybody can come in here and beat us or we can go anywhere and beat anybody." --Alex Kupper

--"We got a tremendous challenge. But, you know, as I told our team yesterday, ‘You wouldn't want it any other way.' The best thing we can do is get on the road, go play Louisville, go play against all odds, and let's just lay it all on the line. And that's what we are going to do." --Temple coach Steve Addazio

--"I don't see a letdown against Temple because they have a fast defense that's difficult and disguises everything." --Teddy Bridgewater

--"Around here we don't look at scores; it's just not our demeanor, it's not our culture here. We're more concerned with us because our whole objective is for us to get better." --Shawn Watson

--"We've got to enjoy the game and play like hell." --Steve Addazio

Picking this team to handily beat anyone seems like about the boldest prediction possible at this point, but I really think the guys are going to make a statement this afternoon about who they've become and who they're going to be going forward. I also think they're a much better football team than Temple.