It all comes down to this. Louisville versus Rutgers on ESPN Thursday night for a Big East championship and a trip to the BCS.

Share All sharing options for: Game Day: Louisville At Rutgers 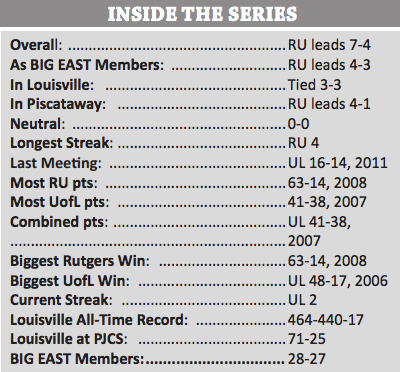 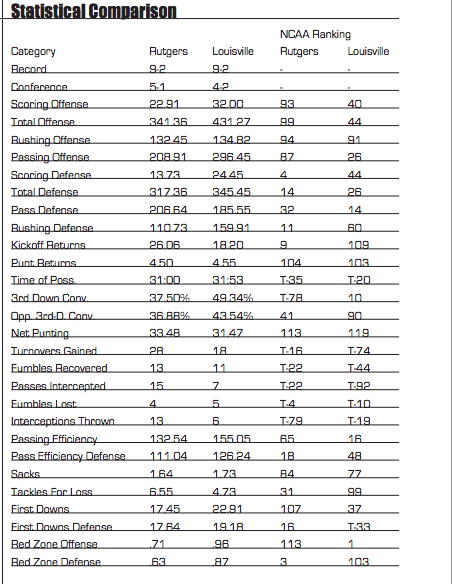 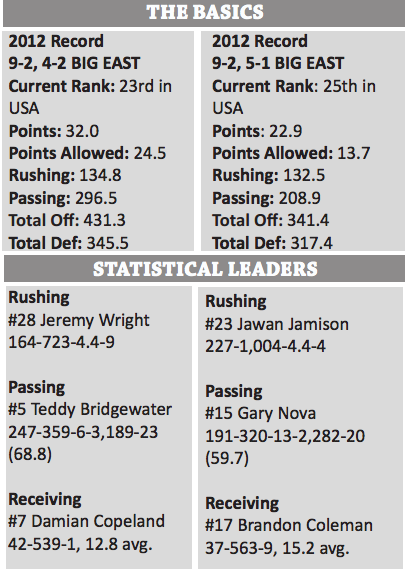 The folks in Jersey are awfully amped up.

I'll fully admit that after last week's disappointment I seriously doubted that I would be able to be as up for this game as I should be. That's not the case after the rejuvenation sparked by ACC Day and being hit with '06 game stories and highlights from every angle for the past 24 hours.

I also always forget how much I dislike Rutgers until right before we play them. Get on Twitter and search the hashtag #ChopLouisville if you need an assist to get adequately motivated.

Win and you're a champion going to he BCS for just the second time in program history. Lose and suddenly you've gone from being unbeaten and ranked in the top ten to your season being a failure.

In terms of a single regular season game, the stakes have rarely been higher.

Pregame Meal: No set plans right now, but I'm thinking about a B-Dubs run around 6-ish. Probably going boneless spicy garlic. Might have a drink or 15 depending on what happens.

I just realized it could be argued that my "there will be a coin toss" bold prediction from last week could be considered inaccurate since there were actually multiple coin tosses (overtime) and "a" implies a singular toss. Still, there was "a" coin toss...there was just also another one.

Predicted Star of the Game: Will Stein

--A win by Rutgers will earn them an outright Big East championship. A win by Louisville would lock up a share of the conference title, and send the Cardinals to the BCS.

--Rutgers leads the all-time series with Louisville 7-4, but the Cards are 4-3 against the Scarlet Knights since joining the Big East.

--Louisville is just 1-4 all-time against Rutgers in Piscataway. Their lone victory was a 40-13 win in the 2010 regular season finale that made the Cards bowl eligible.

--Rutgers has never won a Big East title or been to the BCS. This year's shared or outright title will be their first since joining the conference in 1991.

--Rutgers has played football for 143 years, but this will be just the fifth time they've faced a ranked opponent when they have also been ranked. They are 1-3 in those games.

--A Louisville victory would give the Cardinals a double-digit win season for just the fourth time in program history.

--This will be the first time this season that Louisville have faced a top 25 opponent. Under Charlie Strong, the Cards are 1-1 against top 25 foes.

--Louisville is 5-1 on the road in November under Charlie Strong.

--Only Notre Dame and Alabama have allowed fewer touchdowns than Rutgers this season.

--Only Notre Dame, Alabama and Florida are allowing fewer points per game than Rutgers.

--Rutgers running back Jawan Jamison is just the third Scarlet Knight to rush for 1,000 yards since 1976. He has eclipsed the 100-yard mark in six of the 10 games he has suited up for this season.

--Rutgers QB Gary Nova is 33-2 as a starting quarterback when entering the season as the starter under center. Overall, he is 36-4 as his team's starting signal caller.

--2011 Co-Big East Defensive Player of the Year Kasheem Greene leads RU and the conference with 115 tackles. He also has six forced fumbles, two interceptions, 10.0 tackles for loss, 5.5 sacks and five pass breakups in 2012.

--Louisville has scored at least 20 points in 14 straight games.

--"We're certainly not naive to what the result of the game will dictate for either team. It's a big game. It's the kind of game that you want to be in as a player and as a coach, and it's the kind of game as a program that we hope to be in every year." --Rutgers head coach Kyle Flood

--"Now the opportunity's here is here for us and you don't ever pass up an opportunity. You can always say next year is our year, but now you have a chance this year for it to be that year, so let's take care of business." --Charlie Strong

--"We don't want to share it. Sharing is not a good feeling. I know firsthand from last season, sharing Big East player of the year was horrible. It was almost sickening. I try to tell the guys that. I don't want this team to experience that because we deserve it. We worked very hard since the season ended in Pinstripe Bowl to be in this position. And now it's time to take the next step and win." --Rutgers LB Kasheem Greene

--"There's a big sense of urgency this week. If we go in and get the win, these last few losses won't mean a thing because we'll be Big East champs and we'll going to a BCS bowl. It's the same on the line for Rutgers and they'll be playing their tails off just like we will be." --Will Stein

--"We definitely have to take advantage of (Bridgewater's injury). Attack him. Be more aggressive. Basically, we have to take our shot at him wherever we get a chance. You have to hit him." --Rutgers DE Marcus Thompson

--"You never want to lose games. But what happened the last two games, it took away pressure that may have been self-imposed off us. You can say what you want -- it's only human nature to feel a little bit of pressure. There was a stinging feeling after these two losses. But now, I think there's more of an excitement rather than being anxious and being upset and worried about what happened. There's still a championship in front of us." --Mario Benavides