Even after back-to-back losses, the Weiter family wants the world to know that they're still 100% on the train.

Spread check: Rutgers by 3 (opened at Rutgers by 2). It's the first time all season Louisville will be an underdog.

A lot of people have been asking questions about Big east tiebreakers and what needs to happen for Louisville to go to the BCS. Here's the deal: Louisville wins, they're in. Louisville loses, they're out. The tiebreaker in any situation where the Cards defeat Rutgers is BCS ranking. U of L is already the highest-ranked team in the BCS, something which obviously would not change if they won on Thursday.

Now as far as which BCS game the Card would end up in, the options are limited to the Orange Bowl and the Sugar Bowl. Kent State is currently ranked 17th in the BCS standings. If they win the MAC title, it's likely that they will move up to No. 16, which automatically earns them a BCS bid. In this case, they would likely go to the Orange Bowl, and Louisville would likely face Florida in the Sugar Bowl. If Kent State (or another non-AQ team) does not qualify for an automatic BCS bid, then the Cards are headed to the Orange Bowl for a date with the ACC champion.

Chris Jones, Louisville's point guard of the future, scored a school-record 49 points and hit a 75-foot shot at the buzzer to lift his Northwest Florida State team to an overtime victory over the weekend.

Senior linebacker Steve Beauharnais insists those experiences are not only going to help the Scarlet Knights get through the game plan Thursday, they are what is driving them.

"There is no disappointment now," Beauharnais said. "There will be disappointment if we have to share (the title), because this group of guys have come so far, been through so much. . . . It would be heartbreaking to actually share."

Jared Swopshire is averaging 12.0 points and 6.5 rebounds for 6-0 Northwestern. He's scored 15 points in back-to-back games, including an overtime win over Louisville's next opponent, Illinois State. Jared's hit eight of his last 15 3-point attempts, and is 19-of-20 from the free-throw line.

The U of L volleyball team may have been a little disappointed to receive the No. 10 overall seed in the NCAA Tournament, but there was certainly no disappointment over the news that they would be hosting the first and second rounds at the KFC Yum Center. The Cards will face OVC champ Belmont, a team they swept just three days ago, in the first round on Thursday night at 7:30 p.m.

This is probably the best squad in the history of the U of L volleyball program, so catch them if you can. 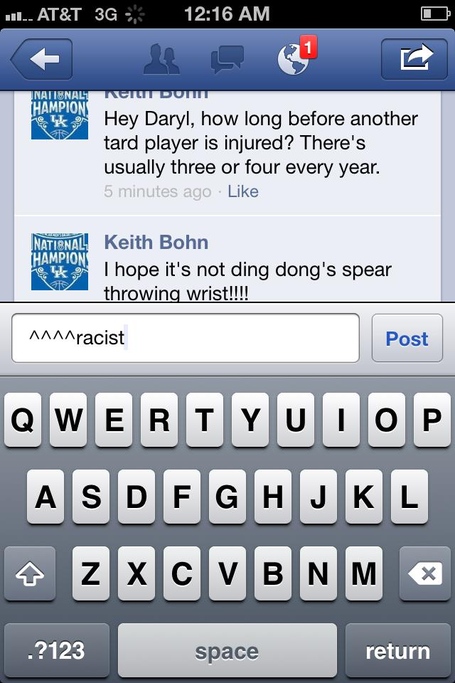 Rick Bozich says that on Thursday night Louisville will either silence its critics or end the regular season on a puzzling three-game losing streak that will have a lot of folks asking questions.

Here's an all-encompassing look at the week that was in U of L sports:

"You know what Gorgui said? This is his exact words, there are people out there with HIV/AIDs, people dying every day. And Mike Marra is unfortunately out for the rest of the season with his injury, he'll (Dieng) be back. That's exactly what he said. It kind of gives me some light at the end of the tunnel there and I can't wait until he gets back."

Quick side note, since we didn't get to talk about the Duke game much: I loved seeing how devastated both Peyton Siva and Russ looked when the cameras showed them walking off the floor after the game. I mean I didn't love seeing them devastated, but that look of having invested so much hasn't always been there with past teams.

I also loved seeing Coach K pull Smith and Siva aside and say "you guys are mother f--kers." He was paying a compliment to just how relentless they are.

We're never going to be able to question this team's effort or heart, and that's just about the greatest blessing you can have if you're a fan.

It's fitting that these are red.

Looks like the UK coaching search is going well. 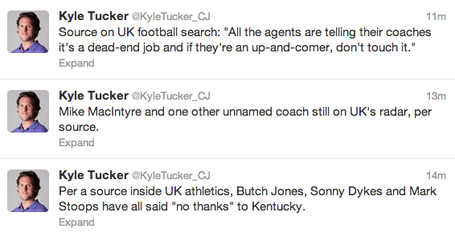 In case you missed it, the Louisville soccer team beat Northwestern on Sunday to advance to the NCAA Tournament Elite 8 for a third straight year. The Cards will now play at No. 2 Maryland on Saturday at 5 p.m. for a spot in the College Cup.

You can keep up with all the U of L soccer action over at our dedicated hub, manned primarily by the Notorious H.O.T.

Speaking of U of L soccer, congrats to former Card Austin Berry, who was officially named MLS Rookie of the Year earlier this month.

Chane Behanan posted a photo on Instagram of the text he sent to Gorgui Dieng today: 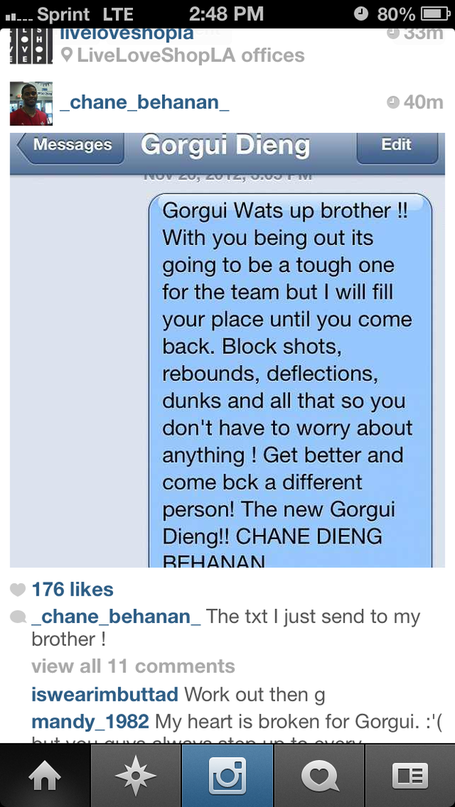 Some very good news from the world of football recruiting, where injured Trinity star James Quick told Cardinal Authority's Jody Demling that Louisville is still the leader for his services even after his official visit to Ohio State. Quick, who suffered a pair of broken ribs in Trinity's win over St. X, has still not ruled out the possibility of playing in this weekend's 6-A state title game against PRP.

I have NO idea where all the Cardinal Pig hate is coming from. The pig was unbeaten and Baby Gorgui had just been blown the F out by Syracuse. Am I crazy for thinking that was a no-brainer?

There's always gotta be someone to blame. Now I know exactly how Louis XVI felt...EXACTLY how he felt.

Russ Smith was named to the Big East's weekly Honor Roll for his performance in the Bahamas. 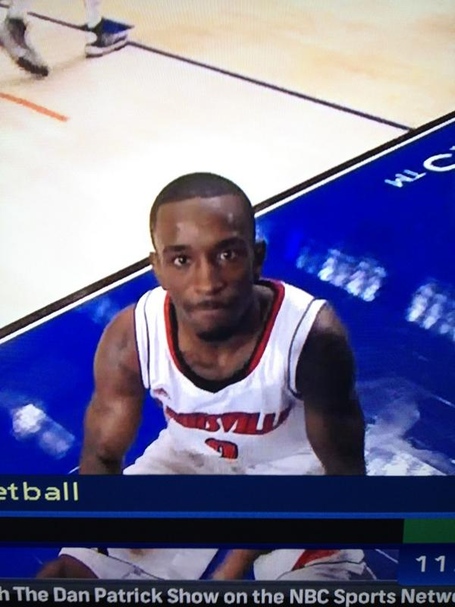 Can't get enough of it.

As I was typing that last blurb Gary Barnidge just scored his first career NFL touchdown. Congratulations to the former Cardinal great.