Thanksgiving Weekend In The Bahamas: A Battle 4 Atlantis Diary

Share All sharing options for: Thanksgiving Weekend In The Bahamas: A Battle 4 Atlantis Diary

First off, if you've never been to Atlantis and you ever get the opportunity to go, do so. The place is everything it's said to be and more. There's a pretty stark contrast between what you see when landing in Nassau and what you see on Paradise Island, and it really puts in to perspective just how important following a bunch of 18-year old kids to the tropics because they can put a ball through a hoop actually is.

After a day of travel that started at the Louisville airport around 5 a.m. (flight was at 7:30 a.m.; I travel for business regularly and I'm still ridiculously anxious about being late for a flight), we finally made it to Nassau around 3:45 p.m.

After getting to our room, we grabbed a bite to eat and some local Bahamian beer then made our way back through the casino and into the main Atlantis ballroom. At around 6:30, a huge dinner meal for all the teams and coaches started in the main ballroom. We saw virtually all the coaches and players from all eight teams. I got to chat with Kareem Richardson, Wyking Jones and Kevin Keatts for a few minutes. All three were really nice and willing to say hello and talk for a few minutes. Anyway, the ballroom has a balcony right above it where a few hundred fans of all the teams were lined up watching. I won't bore you with a description of everything, but here's some highlights from the evening reception:

-Before the team went downstairs to eat, I got to snap a picture with Russ and say hello. We talked for just a second and he mentioned something about having to go eat 139 Cuban sandwiches just to show Jack Taylor and Grinnell College what Russdiculousness looks like. We then took the most Russ Smith picture ever. 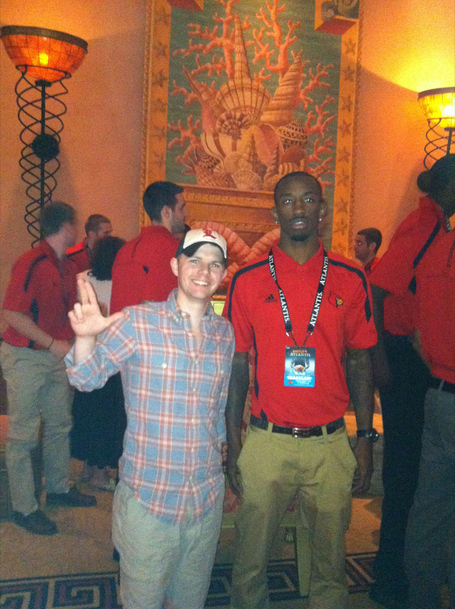 -All the Miss USA winners from the respective states of all eight teams were at the B4A. Based on what I saw, I'm setting the over/under on number of years it takes Tim Henderson to marry one of the pageant girls at 2.5. Young man has game.

-Logan Baumann made the trip. When I saw him, I just had to try to imagine what was going through his mind. Literally two onths ago the guy was an equipment manager and he's now a Louisville Cardinal eating prime rib next to the future Mr. Iowa at the Atlantis Paradise Island.

-Tubby was in the house, as was Saul. I tried to get a picture with them both so I could photobomb it by throwing a giant L up, but they got distracted by Ms. Minnesota. Also, Saul is creepy.

-Probably the funniest moment of the night was when Coach K and Coach Pitino ran into one another. Coach K looked to be on his way out when he saw Coach Pitino and his family and stopped to say hello. On his way over, Coach K grabbed the closest chair and acted like he was going to throw it at Coach Pitino. If you're not in tears, then chalk it up as one of those "just had to be there" things and trust me that it was really, really funny. It was neat to see a sort of personal side to two coaching legends. They chatted for a long time and I assume they were discussing zone press principles and Russ Smith's favorite ice cream flavor.

-Peyton is really a leader. I hate when people read into ridiculously minute situations involving athletes that have nothing to do with sports, but Peyton just stands out as a guy this team follows on and off the court. The entire time during the meal, he was up walking, shaking hands with opposing coaching staffs and introducing fellow Cards. Just a cool thing to see.

-Shaka Smart and Tubby are evidently besties. As the dinner was starting, they talked for about 30 minutes straight. Guessing they were discussing where they were going to apply next if Russ Smith breaks the 138 point record on their team.

-Joanne Pitino was wearing a giant wrap on one of her knees the entire night. Evidently not even Coach Pitino's wife is immune to the injury thing. Fire Pitino; marry Brad Stevens.

When I emailed Mike to ask if he'd like me to do a day-by-day recap of the trip, I was really unsure if I'd be able to tell you guys anything you didn't see on the broadcast of the games. By 1 p.m. on day two, I wasn't unsure anymore. I knew I'd have a few stories to tell.

After breakfast and exploring the Atlantis complex, we decided to stroll through the marina area. While admiring the insanely enormous yachts, we ended up striking up a conversation with a guy on the Mi Sueno, the second biggest yacht in the marina. Turns out the guy we were talking to was the owner, and he's also a minority owner of something you guys might be familiar with; a racehorse named Bodemeister.

We were talking to Mike Moreno, an oil and gas billionaire and horse farm owner who bought a minority stake in Bodemeister. In the course of our conversation, Mike asked me if I ever go to derby. After telling him I went to Breeder's Cup once (lay off me, I'm not a native Kentuckian...), he proceeds to tell me he owns Bodemeister. Wish I'd have asked for my $100 back that I lost after Bodemeister faded.

After a few minutes or so, Mike came down off the yacht and chatted for a bit about how much he loved the state (not the team) of Kentucky. We talked college basketball for a bit and he ended up inviting us on the yacht to shoot some hoops. The experience of playing basketball on the top deck of a $40 million 190 foot yacht the next is a little surreal. 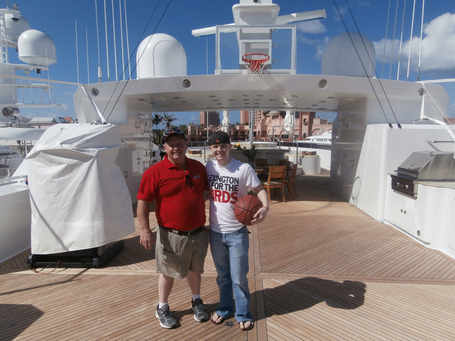 After we stepped off the yacht and chatted for just a few minutes, we parted ways with the Moreno' and were just a little in shock. We decided to grab something to eat and hit up the nearest deli.

While we were tearing down two Reubens, the entire Cards team and coaching staff walked in and were seated right next to us. Ate lunch literally about 8 feet from Coach Pitino, who happens to be a beef barley soup and club sandwich kind of guy.

Not sure if you can see on television just how small the "arena" (which is a hotel ballroom) is, but I played high school basketball in quite a few gyms that seated more people. Place holds 2,000 people tops.

Won't give a play-by-play of the games, but here are some highlights:

-Part of the halftime entertainment of the Mizzou/Stanford game was a dancing, singing sea lion that sings Justin Bieber songs. That last sentence is absolutely, 100% true. I wish I was imaginative enough to make something like that up, but it actually happened. Russ was literally out on the court trying to get to the sea lion. I need a Russ/sea lion photo shop in my life...now.

- In news that everyone already knows, Duke fans are the worst.

-When Russ went all "And 1 Mix Tape" on us with the fake crossover/palming thing, I actually thought Coach Pitino might hurt him. Pitino was absolutely furious. He used about 45 continuous seconds of a TV timeout screaming at Russ.

-Pitino's wrath was unleashed on the entire coaching staff when he accidentally called the last timeout with about 4:20 left in the UNI game. After the timeout ended, he looked at the clock and realized he used his last timeout 20 seconds before the under 4 minute TV timeout, turned to Andree McGee and just went nuts. Looked like someone told him he had more than one TO. He went down the line of four assistants and gave spent about 30 seconds having a rather vocal conversation with each one.

-Cards were lucky to escape against Northern Iowa. By the end of the game, Northern Iowa's crowd (about 1/3 the size of U of L's) was much louder and rowdier than ours.

After ferrying to downtown Nassau and exploring the straw market for the customary Bahamian souvenirs and Cuban cigars, we got back to Paradise Island in time to grab lunch and head to the gym.

We had dinner at Bimini Road, a restaurant near the marina that houses my good friend Mike Moreno's (we go way back; like two days back) yacht. Ate dinner about 20 feet from Jeff Goodman. After trying this week to no avail to harass Jeff via Twitter about Mike's long awaited prize, I decided to let the man eat in peace. He was with his family so I cut him some slack. Thank your wife and daughter, Goodman; they saved you this time.

After suffering through the first two games, we watched Duke pull out a win over VCU. The Rams' fans really, really love Shaka Smart and I can't blame them. His kids just don't stop. They're very possibly an Elite Eight or better team.

After a really unimpressive, flat performance against UNI, the Cards came to play against Mizzou. I won't re-type a bunch of stuff you guys all saw on the broadcast, but it was evident that Kevin Ware was not kidding when he said the energy level would be considerably higher than the night before.

Notes from the game:

-I don't know if this is some kind of new tradition, but right as the team finishes warming up, they've started all lining up around the free throw lane. Someone stands under the basket and tosses Peyton Siva and alley oop and he lays the ball in. Whatever; if it helps him play like he did the last two nights, I'm down with it.

-Russ for All America.

-Luke finally got rolling and the crowd really got behind him. Luke looked noticeably relieved and there was a near constant "LUUUUKKKEEE" cheer coming from the Cards' section.

-While the game crowd was dispersing and walking back to their respective towers, about four "C-A-R-D-S" chants broke out. Cards fans brought some real energy and I can only assume left with a lighter wallet after the victory procession forced the crowd to walk directly through the casino and bar.

VCU fans hate Duke, because, well, VCU fans have souls. There were a couple Rams fans who got their entire crowd cheering for U of L and the place was absolutely rocking. Cards fans really had a great showing and I hope it was evident on television.

We all know how the championship game turned out, so I'll just say this: I left the Bahamas really, really encouraged. We lost to a really good Duke team by a couple baskets without arguably our most important player and unquestionably our best big man. SVT and Zach Price showed they can be serviceable backups at the 5. Peyton and Russ proved against an elite team that they are one of the best 1-2 guard combos in the country. This team is very good, plays with more energy than anyone in America, they like each other, and they're only going to get better.

This Thanksgiving weekend, just like every other, was a great time to be a Louisville Cardinals basketball fan. I have a feeling we could be saying something similar the first weekend in April.