Louisville Blasts Missouri 84-61 In Atlantis Semifinals, Showdown With Duke Up Next

Rick Pitino's Cardinals destroyed the 13th-ranked Tigers to set up a showdown with No. 5 Duke in the Battle 4 Atlantis championship game on Saturday.

Share All sharing options for: Louisville Blasts Missouri 84-61 In Atlantis Semifinals, Showdown With Duke Up Next

It kind of feels like an NCAA Tournament win night, doesn't it?

The second-raked Cardinals of Louisville made their first real statement to the rest of the country by manhandling No. 13 Missouri 84-61 in a Battle 4 Atlantis semifinal showdown Friday night.

The relentless Cardinal defense forced Missouri into 22 turnovers, which led to 31 Louisville points. Preseason SEC Player of the Year Phil Pressey (who was very cocky during an early hot shooting stretch) was the main culprit, throwing the ball away a career-high eight times.

Tailgating is only a handful of hours away, so let's recap this fantastic night quick and dirty.

Peyton and Gorgui out with foul trouble?

As of this posting I have received 27 screen caps/GIFs of this moment. You guys are the absolute best.

Raise your hand if you had Luke Hancock as tonight's leading scorer. The much maligned junior co-captain came off the bench to bury 5-of-7 treys and score a game-high 19 points. I'm not saying he read the "everything is short, follow through and use your legs" spiel on Card Chronicle, I'm just saying I deserve complete credit.

I'm sticking with "Lukelantis" as his nickname for the week. It's a "so bad it's good" situation.

The shooting exhibition put on by Hancock somewhat overshadowed what was one of Wayne Blackshear's most complete performance as a Cardinal to date. Every game he looks more confident is a giant step forward for Louisville's national title hopes.

Your full box score, by the way: 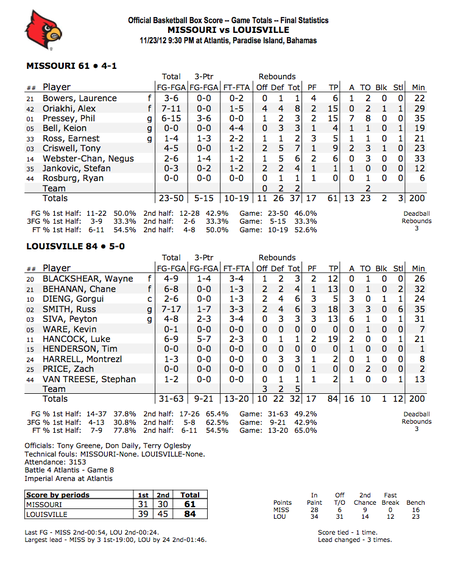 Stephan Van Treese needs to be Gorgui Dieng's primary backup at the five for the rest of the season. I don't think it's a debatable issue anymore.

Peyton Siva took a lot of jawing from Flip Pressey in the game's first 25 minutes or so, and it looked like he finally said something near the end of the game. He deserved to after dropping 13 points and handing out six assists to just one turnover (a meaningless palming call in the game's final minute).

A solid statement for the ongoing "best point guard in the country" debate.

Here are the full postgame comments from Pitino, Hancock and Siva.

He certainly didn't play the game of his life, but Gorgui Dieng gives as much effort as I've ever seen from a big man. The diving slap to keep a possession alive that ultimately ended with a Russ Smith three is the primary example.

Shoutout to the guy in the Teddy Jersey with the foam finger behind the U of L bench. Loved the intensity.

Equal shoutout to the way-too-excited Missouri fan even closer behind the U of L bench. Did not like the intensity. 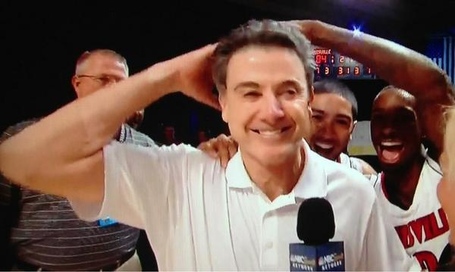 And here's the undeniably adorable GIF.

"What's wrong with your guards?" "One is Russidculous and the other one is normal." Early leader in the clubhouse for best Pitino exchange of the year.

Easiest time ever to be a Louisville fan.

A much, much better effort tonight from Chane, even though he only finished with four rebounds. He finished better around the rim and was more aggressive in situations where aggression was needed.

I'm fully willing to admit it: I couldn't love the pregame intros with the Jock Jams soundtrack and bowling alley strobe lights anymore.

Behind Chicken Knowles, this is the second best thing the Bahamas have given the world. Couldn't be happier we chose this over Maui.

As you probably could have guessed, the CC Bird Mask has been in the area and enjoying the scene. 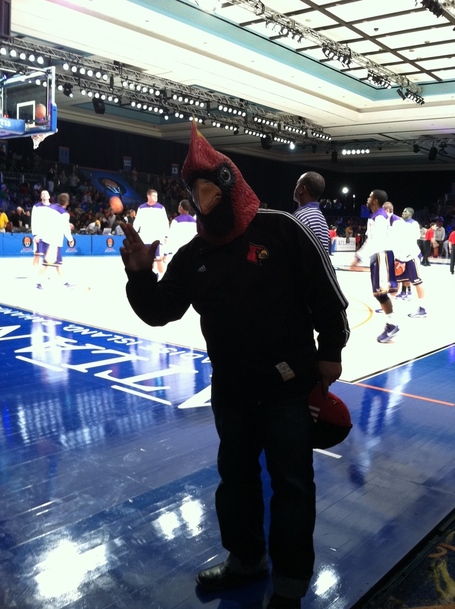 If you push up on Tim Henderson near the end of the first half, you will get crossed and your team will get scored on.

It doesn't get much better than this.

Actually, do you guys just want to go tailgate right now? I have Derby Pie and some good Derrick Caracter stories. See you there in 20.