It's Senior Day at Papa John's Cardinal Stadium, where Louisville will look to knock off visiting Connecticut and give themselves a shot at the Big East title on Thursday against Rutgers.

Share All sharing options for: Game Day: Louisville Vs. Connecticut 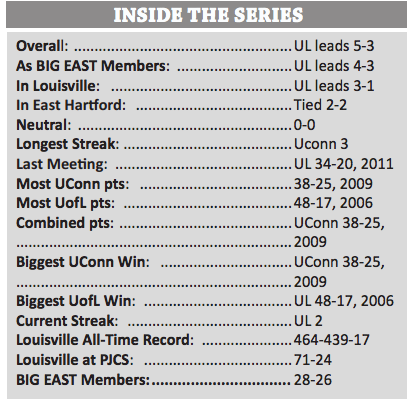 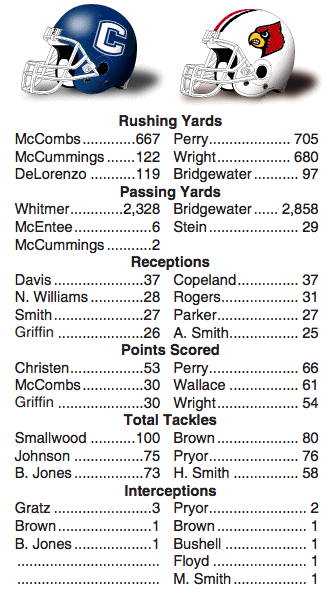 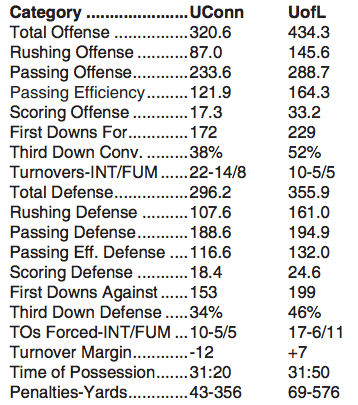 Last home tailgate of the year, Senior Day, essentially a BCS elimination game; plenty of reasons to be up and excited early in the morning.

Was way too warm to wear the turtleneck inside last week...pretty much lost us the game.

Bold Prediction: There will be a coin toss.

I'm terrified for the official in charge of making this happen.

The senior makes more than one monster play in his final home game as a Card. Loves facing UConn in November.

Titus Teague Playing Alert Level: Antique Brass (NO ONE WILL TELL ME IF HE'S OK)

--At home, Louisville is 3-1 all-time versus Connecticut, but has split the last two meetings at Papa John's Cardinal Stadium.

--UConn needs to defeat Louisville in order to keep their hopes of playing in a bowl game alive.

--UConn defeated Pitt two weeks ago, but the Huskies are 0-8 under head coach Paul Pasqualoni in games after a win.

--We're way better than UConn at pretty much all stuff.

--Louisville has won six straight home games. It's their longest streak since their run of 20 straight home victories was snapped in 2007.

--Louisville is 0-2 on Senior Day under head coach Charlie Strong.

--UConn head coach Paul Pasqualoni has a 1-2 head coaching record against Louisville from his time at Syracuse and last year's game as the Connecticut coach.

--A win would mean Louisville would have won double-digit games in a season for just the fourth time in program history.

--Louisville is 22-5 under head coach Charlie Strong when scoring 20 or more points.

--UConn hasn't scored more than 24 points in a game since the opener against UMass, and rank 117th in scoring offense (out of 120 teams). The Huskies have scored just 61 points in the second half this season, the fewest in FBS.

--Louisville has scored at least 20 points in 13 straight games.

--A victory would give U of L just its seventh perfect home season ever, and its first since 2006.

--"We have these next two games and we're looking forward to winning this game and then playing Cincinnati and winning that game as well and becoming bowl eligible." UConn safety Ty-Meer Brown

--"When we came in, we talked about our foundation. I just feel this group is a part of us because they've been with us for three years and they have been a part of watching this program build. You cannot ask for a stronger group of seniors with the leadership they have provided this season." --Charlie Strong

--"Going down to Louisville, they're coming off a loss, which I think hurts us because they're going to be extra focused, extra ready, looking at that Big East title. It's a loud place, but we've got some seniors and we've got some poise, and hopefully we can come out of there with a win." --UConn tight end Ryan Griffin

--"There's still more to go get. Hopefully we can get to that Orange Bowl. Just to go there - I (would) never forget that." --Scott Radcliff

--"It's a huge challenge, he's probably the best quarterback we have faced this year. We are going to see how good we are as a defense and we have to step up to the challenge." --UConn strong safety Ty-Meer Brown

--"There are bigger goals yet to be met for this football program. One setback, we can't turn it into frustration, excuse-making or poor individual habits. We always have to look at what you have left and never look at what you lost." --Charlie Strong

--"As a football player you have to go into every game as a competitor, no matter what's on the line. A Big East title or a bowl game in Alabama, it's equally important for both teams, and I expect the play to be the same." --UConn tight end Ryan Griffin

--"The guys that stuck around, that's just what we're bred for. We wanted to fight through it. We wanted to see it turn around and, ultimately, it has. --Alex Kupper

--"It's a lot of it with the seniors wanting to get back to bowls. We want to get back to doing what we've done: being able to win these games and re-correct the history of this program." --UConn LB Sio Moore

--"We are in a great position. We have great facilities, We have a great AD [Tom Jurich]. ... At some point, somebody is going to turn around and look at Louisville and say, 'Look at what they are doing.' Or maybe they are afraid to let us come in [because] of what we're doing." --Charlie Strong

Lose this game and you lose pretty much every preseason goal you set. There's far too much at stake for this to be anything other than a top-notch performance.