Your Complete Guide To The Battle 4 Atlantis

One of the best early season tournaments in the history of college basketball will begin on Thanksgiving, and Louisville is the favorite to claim its crown.

Share All sharing options for: Your Complete Guide To The Battle 4 Atlantis 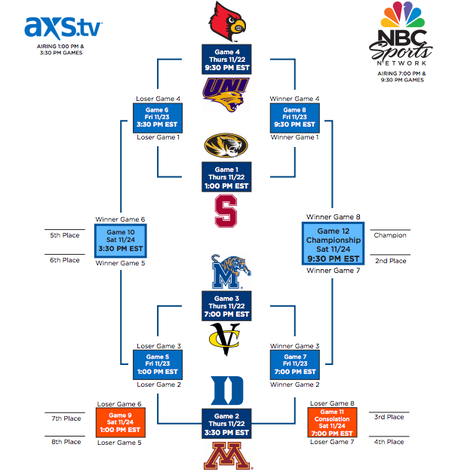 The tournament technically wasn't seeded, except that it pretty obviously was. Ultimately, however, it appears as though the Cards may have gotten a bit of a raw deal as the "top seed." It's hard to make a case that Missouri - the presumed No. 4 seed - is worse than the third-best team in the field, especially with Memphis looking so pedestrian against Samford.

Of course on the other side Duke is being forced to play a game Minnesota squad in the first round. There's just no easy road to a title with these eight teams comprising the field.

Off to a 3-0 start, Northern Iowa returned four starters from a team that won 19 games and finished tied for third in the Missouri Valley a season ago. The Panthers were almost too balanced last season, as seven players averaged better than six points per game, but just one - guard Anthony James - was in double figures. The good news for coach Ben Jacobson is that only one of those seven players (Johnny Moran) was a senior.

Guard Deon Mitchell has parlayed a strong end to his sophomore season into a scorching hot start to his sophomore campaign, averaging a team-high 17.7 ppg. He also leads the team in assists with 14. Taking some of the pressure off of Mitchell this week will be the return of James, who was suspended for the first three games of the season. He's not a terrific outside shooter, but James is terrific at getting into the lane and either finding the open man or finishing around the rim.

UNI's inside duo of Seth Tuttle (6'8) and Jake Koch (6'9) have been terrific to start the season, but they haven't faced a frontcourt that possess anywhere near the matchup problems that Louisville's does. The Panthers don't have a lot of depth down low, so Tuttle and Koch staying out of foul trouble is of paramount importance all week.

Despite being the unofficial eight seed, the Panthers are the best team in the tournament in terms of offensive efficiency (124.5) and field goal percentage (51.5%).

Yeah, it's a stacked field.

Mizzou began the season ranked 15th by the Associated Press and 17th by the coaches. You wonder how different those rankings would have looked had they not become just the fourth No. 2 seed to lose to a 15 after being stunned by Norfolk State last March. It's almost as if their 30 wins and Big 12 Tournament title - which had more than a few folks saying the Tigers, and not Michigan State, deserved to be the big dance's fourth No. 1 seed - were wiped away because of one disastrous stretch of 40 minutes.

Though reigning National Coach of the Year Frank Haith has to replace his top three scorers from last season, he returns the guy who makes his up-tempo offense go. SEC preseason Player of the Year Phil Pressey is back to run the show in Columbia after averaging 10.3 points, 3.3 rebounds and 6.4 assists in 2011-12. One of the country's most dynamic playmakers was supposed to be joined in the backcourt by the team's leading returning scorer, Michael Dixon (13.5 ppg), but Dixon has been serving an indefinite suspension since late October. He made the trip with the team to the Bahamas, but as of right now the suspension has not been lifted.

Assuming the Dixon situation is ultimately resolved, Missouri's real intrigue lies in the four elite transfers that Haith was able to pull in for this season. Alex Oriakhi was a starter on UConn's 2010 national championship team and fills the massive void in the middle that hurt the Tigers at times last season. Keion Bell was an elite scorer for three seasons at Pepperdine, and I think he's going to be one of the surprise stars on the national level this season. Earnest Ross will likely be Missouri's top on-ball defender, and won't have the pressure of carrying the scoring load the way he did at Auburn.

The trio of transfers (who will be joined by Oregon defector Jabari Brown after this semester ends) are all off to tremendous starts. Ross ranks third on the team in scoring (13.3 ppg) and second in rebounding (6.3 rpg), Oriakhi is averaging a double-double (12.3/11.7) and Bell is fifth in scoring (9.3 ppg) and third in assists (1.7 apg).

If that weren't enough, Haith also gets forward Laurence Bowers back after he missed all of last season with an ACL tear. Bowers averaged 11.6 points and 6.1 rebounds in 2010-11 and has showed no signs of rust this season, leading the team in scoring at 15.3 ppg.

Kentucky and Florida garnered most of the preseason love, but I think this is the SEC team best suited for a Final Four run. They won't win the league because of a lack of familiarity with opposing styles, players, venues, etc., but they'll be a force in the big dance and this week in Atlantis.

After being bested by Belmont in their final Atlantis tuneup, the Cardinal are one of just two teams in the field with a loss.

The biggest concern for Stanford right now is slumping star Chasson Randle. The sophomore guard still leads the team in scoring (13.0 ppg), but he has yet to shoot at least 50% from the field in a game this season. His struggles came to a head in the loss to Belmont, a game which saw him hit just one of his 11 shot attempts to drop his season shooting percentage to 31.3%.

Randle was the biggest reason many predicted that Stanford would challenge for the Pac-12 title this season, but he certainly wasn't the only one.

Aaron Bright was the MVP of the team's 2012 NIT championship run, but he too has been slow out of the gate, averaging just 9.0 points and turning the ball over 2.5 times per game. Dwight Powell (12.3/7.3) and Josh Huestis (10.5/9.0) are both off to solid starts and should provide the toughest inside test Missouri has faced yet.

The big issue for Stanford on Thanksgiving is going to be Missouri's style of play. The Cardinal would much rather play a halfcourt game and have been turnover prone when they've allowed opponents (like Belmont) to speed them up.

This is going to be a better Blue Devil team than the one that earned a two seed in the NCAA Tournament and was eventually upset by Lehigh. I would almost bet my favorite Christmas decoration on it.

Miles Plumlee and Austin Rivers are both being paid to play the game while Andre Dawkins is taking a redshirt year to clear his head, but the returning (and entering) group of players seem to have a better balance and chemistry than last year's team.

Mason Plumlee has been an absolute monster in the paint for Coach K so far, averaging 21.7 points and 8.7 rebounds. He's also been a force on the other end of the floor, averaging 2.7 blocks per game. The other Blue Devil star has been Seth Curry, who no longer has to defer to Rivers or Dawkins in big shot situations. Del's son and Stephen's brother is averaging 16.0 ppg and made key play after key play in Duke's win over then No. 3 Kentucky.

Defense was Duke's bugaboo a season ago, and though they've looked better through three games this season, they still aren't exactly the Detroit Pistons of the 1980s. The Blue Devils come to Atlantis ranking last in the eight-team field in defensive efficiency (92.7) and three-point defense (40.8%), and tied for last in field goal percentage defense (42.1%).

The other major concern entering the season was point guard play. Quinn Cook has solid averages in points (7.7) and assists (4.7), but turnovers (3.0 per game) have been a consistent problem. The addition of highly-touted freshman Rasheed Suliamon (11.7 points/3.7 assists) has helped take some of the pressure off Cook.

Duke is pretty much college basketball's king when it comes to early season tournaments, and you have to imagine that not being the favorites this week has them coming to the Bahamas with a chip on their shoulder.

Former All-American Trevor Mbakwe is still getting his feet back under him after coming back from a second ACL tear, averaging six points and six boards over 16.3 mpg. Leading the way in place of Mbakwe has been senior froward Rodney Williams, who leads the team in scoring (14.5 ppg) and rebounding (6.5 rpg), and ranks second in assists (2.5 apg). Junior guard Austin Hollins is also averaging 14.5 points, and is 7-of-11 from beyond the arc over Minnesota's past three games.

The Gophers have six wins over the past five seasons against top-10 teams, including three straight years from 2008-10 when they beat Louisville, Butler and North Carolina in preseason tournaments. Frontcourt depth is a concern, but this is a team that's not only good enough to upset Duke, but good enough to win this whole tournament.

On paper, this could be the best team Shaka Smart has fielded at Virginia Commonwealth. Considering what his squads have accomplished over the past two seasons, that's saying something.

The Rams bring their havoc defense to the Bahamas, which is currently allowing just 54.7 poins per game. Still, they suffered a surprising setback a week ago when they were upended by undefeated Wichita State, 53-51.

Though VCU's M.O. is once again to beat opponents with the outside shot, junior big man Juvonte Reddic is the team's leading scorer at 16.3 ppg. He also leads the Rams in rebounding with an 8.7 average.

VCU will come at you in waves, with a remarkable 10 different players averaging at least 10.0 minutes per game, and seven averaging 6.3 ppg or better.

Out of that group, the play of the sometimes erratic Jackson might be the most important. He doesn't have the pro potential that a guy like Thomas does, but Jackson's incredible quickness makes him one of the most potentially dangerous players in college basketball. He just needs to learn how to make the right decision after gaining an advantage on his defender, something he's done so far this season, averaging five assists per game against just one turnover.

Missing the tournament in his first season and then going one-and-done in his next two has left more than a few Memphis fans frustrated with head coach Josh Pastner. Seeing what ex-coach John Calipari is doing at Kentucky hasn't helped matters much either. The whispers have picked back up after the Tigers' less-than-stellar performance against Samford. A big showing this week would go a long way in quieting the detractors.

Is really cool and awesome in every way.

Whatever happens, this is going to be an insane three days of basketball.