Nick Colyer enjoying life in Ireland...where no one has heard of or cares about conference realignment.

As expected, realignment scoops, stories and questions have been pouring in from every angle today. The only thing I'm going to say at this point is that Louisville is a heavy, heavy (HEAVY) underdog in the fight for the ACC's 14th spot. We all know it's not the way it should be, but that's definitely the way it is.

Nothing's official until an announcement comes, though. We're all well-versed enough in this crap to know that.

If you have any questions about all this conference realignment madness (you do), then Eric Crawford's latest piece for WDRB is a must read. He be the best.

Andrew Jones of Fox Sports, for his part, thinks Louisville is the perfect addition for the ACC.

That brings us to Louisville, which makes the most sense on numerous fronts. Its No. 160 U.S. News ranking isn't going to thrill the academically minded ACC, but it has improved steadily in recent years. Plus, the ACC can help it climb that ladder quickly.

Louisville has a brand from its basketball success and has a rabid fan base larger than several current ACC schools. It would add a bit more fanaticism to the conference, which is needed, and has facilities that rank among the best. Its football stadium has gone through recent major upgrades and seats a respectable 58,000 fans. That U of L sports is the top dog in its market, unlike the other likely contenders, can't be overstated.

And, if you really want to get honest here, Louisville may bring more to the ACC than Maryland moving forward.

U of L President James Ramsey was not shy about openly discussing U of L and the ACC earlier today.

Jeremy Wright discusses having to shoulder more of the load against Connecticut with Senorise Perry out.

No Cardinals make CBS' first Player of the Year watch list. I think at least one player on the team may have a case...his nickname rhymes with shmussshmiculous.

Had a really good time shooting an interview last week with Adam Lefkoe and the rest of the crew for the upcoming Red V Blue documentary about the Louisville/Kentucky rivalry. We got to shoot at Denny Crum's office, which was cool. Shoutout to Judy.

The equipment they use is ridiculous, and seeing yourself in the same kind of shot that you see on an ESPN "30 for 30" doc is pretty wild.

Can't say I was too thrilled about the size of my cheeks in the footage...This was my wake-up call.

Anyway, they're on their way to producing a pretty terrific documentary, and you can follow the proceedings on Twitter at @redvblueKY. 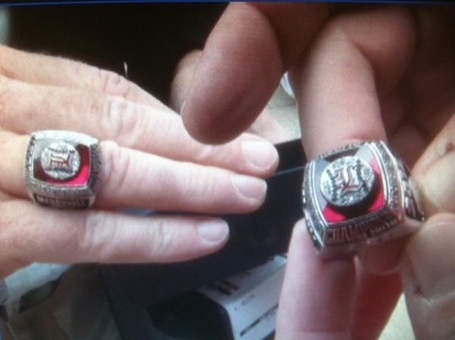 All we do is win championships and wear jewelry, ACC. Just like when my babysitters forced me to play that game "Girl Talk" growing up. Did I wear my mom's necklace? Yes. Did I bring home the title? Yes. Did I hook up with all of said babysitters? None of them.

Congrats to Alex Kupper on being named a semifinalist for the Burlworth Trophy, which is given annually to the best college football player who began his career as a walk-on.

U of L will be accepting unwrapped toy donations before, during and after Saturday's football game against Connecticut. Look for the Margaret's Moving & Storage Truck in Streetfest or for boxes located at each gate.

ESPN says Teddy Bridgewater is the only semi-legitimate Heisman Trophy candidate remaining in the Big East.

Teddy Bridgewater, QB, Louisville: The odds are stacked against the sophomore at this point, though the fact he kept a serious run going through nine games is pretty remarkable. Bridgewater has had two weeks to absorb the Cardinals' first loss of the season. Having two games left to make his case could prove beneficial, especially going into next week's Thursday night showdown at Rutgers, where a BCS berth probably will be on the line with the whole nation watching. Bridgewater has completed 70.9 percent of his passes for 2,858 yards with 21 touchdowns and five interceptions.

The AP's Louisville/UConn (football) preview is out.

Chris Jones and Terry Rozier have both made gigantic leaps in the latest 247.com recruiting rankings and are now each considered five-star prospects.

Pete Thamel writes that Louisville and UConn leaving would unquestionably be the tipping point for the Big East.

The Cardinal Connect points out that Peyton Siva is quietly leading the country in assists per game. Not going to lie, I had no clue.

Via 922 on Twitter, now you've made Charlie angry, Huskies.

You wouldn't like--whatever, you know the quote.

And finally, in case you hadn't heard, Louisville basketball makes a lot of money.