The Howard family is pretty excited about the return of news and notes, but not thrilled about the length.

There are about 1,000 items floating around that warrant mention, but I am insanely strapped for time (ALL I WANT TO DO IS WATCH BASKETBALL), so this is going to have to be quick.

First off, I'm on the raio with Mark Ennis tonight from 6-8 on ESPN 680 and ESPNLouisville.com. Pretty confident we'll be discussing conference realignment.

If you missed yesterday's Big East volleyball championship, you missed perhaps the crowning achievement of the Card Chronicle Bird Mask to date.

The hero pictured below was sitting in the front row of the Louisville side by himself. Watching the bird head moving side-to-side to follow the action as the human wearing it sat calmly with his arm's folded in his lap was both mesmerizing and tremendous. 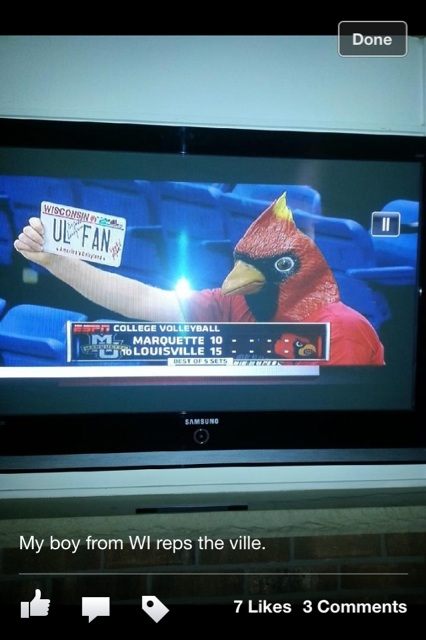 The fact that the match was played at Marquette made it all the more impressive.

Oh, and by the way, the Cards won the title via a sweep, becoming the first Big East team to win both the regular season and tournament title in the same year since 2007. Anne Kordes has dome a remarkable job in a short period of time, and there's talk that this may be U of L's best shot at a Final Four in the history of the program.

The Final Four, for your information, will be played at the KFC Yum Center.

Also, getting the job done over the weekend was the U of L soccer team. Here are the highlights of the 5-0 trouncing of Winthrop that sent the Cards into the Sweet 16:

ESPN's new college hoops power rankings have Louisville at No 2.

If you haven't read it already, TNIAAM makes the case for Louisville over Connecticut. It's a sentiment which is being echoed all over Twitter and other forms of media

The Louisville women's basketball team is No. 7 in the new AP Top 25.

Via Elle Raiser's Facebook page, check out the current piece of information U of L football players are being forced to stare at every day: 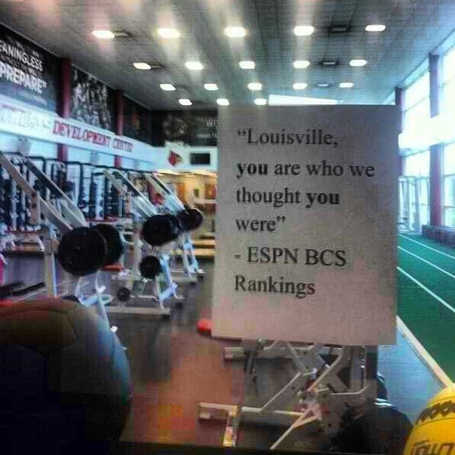 Jason Kirk of SB Nation says it would be a travesty if the ACC took Connecticut ahead of Louisville.

Rutgers and Louisville appear to be on a collision course for a de facto title game, which means the Cards need to treat this weekend's game against UConn as if its a conference championship semifinal game.

Taquan Dean ruffled some feathers with this tweet in the middle of yesterday's win over Miami.

Way to go Cards. Time for coach P to get a ring this year it's only right. He didn't cut any corners like that man 40 minutes away

Still in my all-time top five.

And finally, the Terry Rozier hype continues to build, with recruiting analyst Jerry Meyer saying the Cardinal commit is definitely a five-star player and that he'll "be shocked" if Rozier doesn't play in the NBA.

It's nice to see loyalty rewarded on both sides there.