Colton Aaron Cropper is all ready for the weekend. Or maybe he's already had a little too much weekend. I can't tell which.

In an unexpected move, Bloggin' Rick Pitino took to his computer Friday night to recap the Samford game.

* Russ is playing terrific. Has to get loose ball rebounds and once every blue moon create an assist. (LOL) Impressed with his energy and desire to make things happen.

* Gorgui still needs to finish stronger inside. But has improved his passing, shooting and perimeter skills.

* Peyton is doing a solid job of getting us into our offenses early. Without question a Coach on the floor.

* Chane is improving as he rounds into basketball shape. Although he broke down a little on defense in the second half, he played the game without a turnover. That is a major blessing.

* Luke and Wayne didn't shoot well but both did a lot of good things at the defensive end. I'm not overly concerned about Luke's 1-10 3 pt. shooting, or Wayne's 1-8. Luke was 8/17 in our three red/white scrimmages. Wayne and Luke will both improve their perimeter shooting as their shoulders get stronger and conditioned to the 3 pt. shot.

If BR is going to make a habit out of postgame recaps then I'm probably going to have to stop doing mine.

The Louisville women's basketball team had no problem with Austin Peay last night, rolling to a 90-52 victory. Shoni Schimmel scored 12 points and became U of L's 23rd 1,000-point scorer during the game.

Luke Winn's first in-season power rankings are out, and Louisville checks in behind Indiana at No. 2.

From the stuff-I'm-monitoring-with-a-degree-of-skepticism file: Junior guard Russ Smith -- whose Russ-diculousness became legend in last season's NCAA tournament -- is vowing to play more under control on offense, with smarter shot selection. The two-guard who shot 35.6 percent from the field as a sophomore told the Louisville Courier-Journal that he'd still like to be called Russ-diculous -- "It's a pretty popular name, so I wouldn't want to lose that" -- but he doesn't want to play Russdiculously anymore.

In the Cardinals' season-opening win over Manhattan, he scored 23 points on 8-of-18 shooting with just two turnovers. In game No. 2 against Samford, he scored 18 points on 7-of-14 shooting, with three turnovers. His field-goal percentage is 46.9 thus far. If Smith can find a way to be Louisville's go-to-guy while scoring more than 1.1 points per possession (he's at 1.19), its offense will be in good shape. "When Russ is playing well and under control," teammate Luke Hancock told the Courier-Journal, "he's probably the best two guard in the country."

Congrats to U of L volleyballer Lola Arslanbekova, who is the first player to be named Big East Player of the Year in consecutive seasons since 1996-97. She is the only active NCAA Division I player with 2,000 kills and 1,000 digs.

Speaking of the volleyball team, the top-seeded Cards rolled to a sweep of St. John's in the first round of the Big East Tournament today.

Be sure to check out our dedicated postseason soccer hub, where Hot Hot is doing his best to infuriate the hoards of Winthrop soccer fans visiting this site. 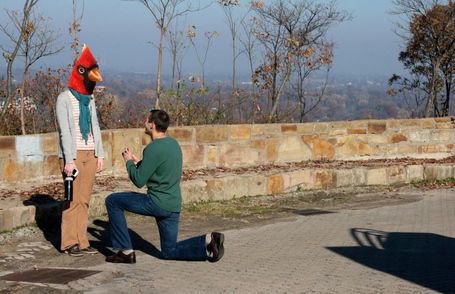 Couldn't be happier for it.

Quick shouout to Chronicloid Gina Willis, who is the head coach of the Final Four-bound DePauw field hockey team. Best of luck to Gina and the Tigers this weekend.

Jared Swopshire had a huge night for Northwestern on Thursday, drilling 5-of-6 three-pointers and scoring 22 point in a Wildcat victory.

Chicken Knowles getting all nostalgic on us.

The folks at Miami (OH) give a quick preview of Sunday's game against Louisville. 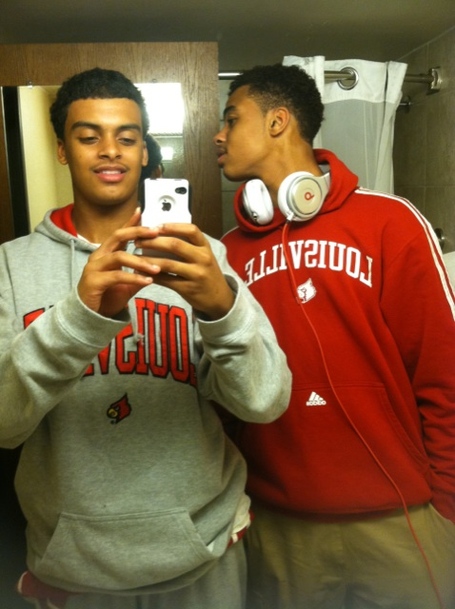 I have that hoodie.

Former U of L WR Tiger Jones just signed a deal with the Philadelphia Soul of the AFL.

The folks in Iowa don't think Louisville would fare too well against Alabama in the Sugar Bowl.

In the end, Kansas State, Oregon, and Notre Dame will all go undefeated. Notre Dame will suspiciously leap over the Wildcats in the final BCS poll and play Oregon in Miami. The Irish will defeat the Ducks, and Alabama blows out Louisville by 90 in the Sugar Bowl.

And finally, DePaul lost to Gardner-Webb by 12. Just looking for the right uniform combination for they return to powerhouse status.