Your game recap for U of L's romp over Samford Thursday night.

Samford is probably the worst team on Louisville's 2012-13 schedule, so Thursday night's game figured to be on the most "meh" games of the season.

Instead, we were treated to a remarkably focused and spirited effort from the Cards in the first half, which ended with U of L leading 42-13. Then Louisville got lazy on defense and the glass and actually wound up losing the second half, 41-38. Return of the "meh."

Still, there are items worth addressing...which we will do.

Luke Hancock is the talk of the town today, and not for any of the reasons he might have hoped for.

I do feel bad for Luke for a number of reasons. First, he's been off the court for a year and-a-half and I'm sure suffering through a shooting slump was not the way he dreamed of returning. Two, this is the first taste he's gotten of life as a basketball player at Louisville, where every dribble, shot and pass is scrutinized. It's definitely something that takes some getting used to. Three, I don't think there's any question that the Pitino hype exacerbated things. When a guy is referred to as "the best player on the team," it raises the bar, even when the majority of the audience doing the bar raising knows that the original comment probably wasn't true.

Being in a shooting slump is sort of like being a cornerback who gets burned deep a couple times in a game. You can do everything else right, and people are only going to remember the missed shots or the surrendered big plays. It's frustrating, and the only way to overcome it is to see the ball go through the net a few times.

As for Pitino's comments over the past year about Hancock, while I think calling him the best player on the team was certainly over the top, I can see what he was saying in terms of value. Hancock would have been a really valuable player on the last two U of L teams. He's a good passer, he handles the ball well enough to take some pressure off the point guard, and he knows how to rotate on defense. He would have been a great guy to have flash in the middle against 2-3 zones and to have coordinating the defense on the other end of the floor.

This team is different, and I think that's why Hancock is having a little difficulty fitting in. Louisville is going to be play almost all man-to-man defense, and we've already seen Luke struggle to keep the guy he's guarding from getting to the basket. He also hasn't taken care of the ball very well, throwing risky passes at times when they haven't been necessary. I think a lot of that has to do with him trying to play to the strengths of his more athletic teammates.

Hancock has value, and I think eventually (like...in more ime than two games) we'll all realize that. He's a good finisher around the basket, he locates the open man really well and he knows what he's supposed to be doing on defense. Do I think he should be starting? No, I think Peyton, Russ, Wayne, Chane and Gorgui should be our lineup on Sunday and probably for the rest of the season. That said, I'm not ready to give up on Luke Hancock after two games. He'll have more than a few moments in the sun this season.

The whole "Kenneth Faried as a teaching tool" thing definitely paid off, as Louisville looked like a completely different team on the glass than they'd been for the first half of November. Obviously Chane gets top praise here for his 13-rebound performance in the first half.

Rebounding is really so much about attitude and effort, and it's one of the areas where the Cardinals are going to have to dominate opponents if they want to win a national championship.

Russ Smith encouraging the crowd to cheer for Luke when he was at the line shooting the second of his flagrant free-throws was probably the coolest moment of the night. 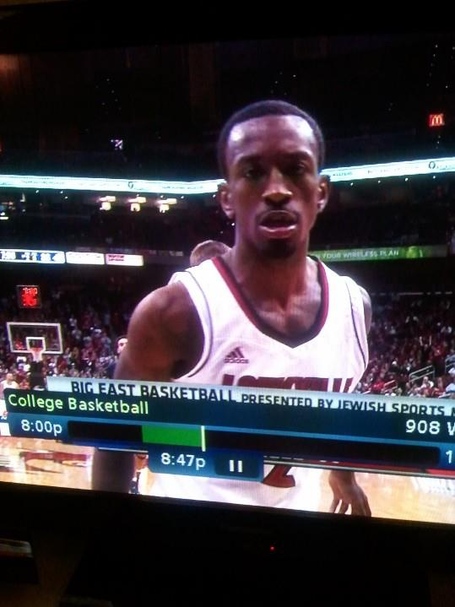 I'm going to get Drew Deener to say penis on the air this season. If you've ever been sure of anything in your lives, be sure of that.

Also, for those asking, I tweeted "Russdunkulous" AT LEAST a second and-a-half before he said it on air. The man is a thief and a coward. Let saying penis be your penance, Drew.

Nice to see the Jordan Bond for All-American movement continuing to gain traction. The kid just continues to produce.

I wonder what the largest disparity between first and second half points by a Louisville opponent ever is. Twenty-eight has to be up there. Those guys went from not being able to dribble to hitting fade away threes with four hands in their face. It was like they took that drug from Limitless in the locker room. Was Limitless popular enough for a game wrap reference? I hope so because it just happened.

Now I know how all those Nickelodeon game contestants in the '90s felt when they went home with clean clothes. We all need to get Slimed in the very near future.

Peyton Siva and Gorgui Dieng are both very good at basketball. I could give you details, but it'd be a waste of both of our time.

It's pretty clear how much time Kevin spent working on his jumper this offseason. I don't think anyone wants him jacking up seven threes a game or anything, but it is significantly better than it was at any point during his freshman year.

Seth Greenberg has earned a one-year pass from me to say anything stupid he wants on ESPN because he got fired and gave us 'Trez. Talk about Louisville's poor outside shooting all you want, my man, not going to hear a peep from me.

This time next week we'll be freaking out about what might be the most loaded early season college basketball tournament ever. Let's enjoy the calm for now.