Adam Dozier was so upset about the recent absence of Cardinal News and Notes that he jumped out of a plane. Sure his wife Julie gave him the experience as a birthday present, but still...he did it.

Apologies for the lack of content yesterday and the no news and notes on Monday and Tuesday. Sometimes the work they pay me to do takes precedence, which is sooo annoying. Thanks to anyone who checked out the 24 hour live blog yesterday or who kept me company on Twitter. It was much appreciated.

I love staying up and covering the entire marathon, but the loss of time is surreal. You start doing your prep work for the event (which starts in just a handful of hours) on Monday morning/afternoon, then you're working constantly, then you get to crash, then you all your wrap-up/catch up work and suddenly it's Wednesday night. I also still feel very lethargic and my stomach has been fighting me all day. Probably just pregnant.

The Courier-Journal's spread on Russ Smith this morning was the best thing they've done in ages. Also, this is now my early favorite for quote of the year.

This season Smith is trying to roll with only one definition.

"It's a pretty popular name, so I wouldn't want to lose that," the junior guard said. "Losing the perception would be cool. I want to make people say, ‘Oh, wow, Russdiculous changed.' "

Life would be so much worse without Russ Smith.

Even though we just praised them a blurb ago, we have to give you the C-J flub of the day. 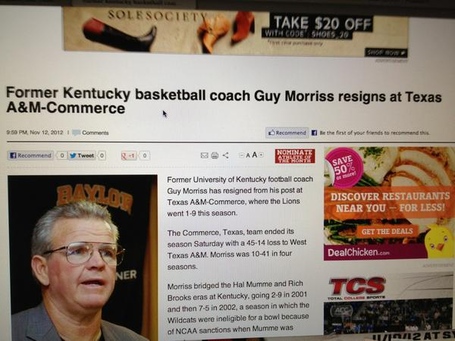 Still would have done a better job than Gillispie.

If you were watching last night's Duke/Kentucky game then you probably heard John Calipari call out Blue Devil players for flopping just before the half. Well coach K responded when he was told about the comments after the game, and he did so pretty effectively.

"They're flopping all over the place," Calipari said of Duke's defense. "In the NBA, they'd all be suspended."

When Duke head coach Mike Krzyzewski was told of Calipari's comments after the game, he gave a tongue-and-cheek response the drew a few chuckles from the media assembled at the press conference.

"I mean, he has a right to say whatever he wants," Krzyzewski said. "I thought we took some amazing charges, and I thought we probably could have taken a couple more. There's a difference between a charge and a flop. A flop means you don't take any contact. I would hope that anyone who watches the game would say that our kids really played outstanding defense and were there to take charges.

Calipari later said that his comment was a joke, which anyone who was watching the game could have told you was a lie.

Speaking of that game, Lil' Wayne was sitting courtside and apparently took the opportunity to cuss out Duke freshman Rasheed Sulaimon.

Check out the Cardinal soccer team finding out that it received the No. 10 seed and a bye in the NCAA Tournament.

A recent study says that bringing an NBA team to Louisville isn't economically feasible. The folks responsible for the report reached out to me, and as a result you can read the full report from Cambridge Economic Research here, or the white paper the firm produced right here.

I don't really have a dog in the fight, but there are a bunch of interesting items there.

Akoy Agau on being compared to Gorgui Dieng and Mangok Mathiang:

If you haven't read the FanPost on Greg Scruggs, you should.

I feel like I've been hearing the "has (player) been at (school) for (number larger than four) years" joke even more often than usual recently, and I wish it would stop.

The answer is no, he has not. What happened is he played a fairly prominent role or had some memorable moments during his freshman season, he was a solid contributor as a sophomore and junior but not solid enough to go pro, and now he's back for his senior season. That is the situation with the player you are referencing.

I feel strongly about this. 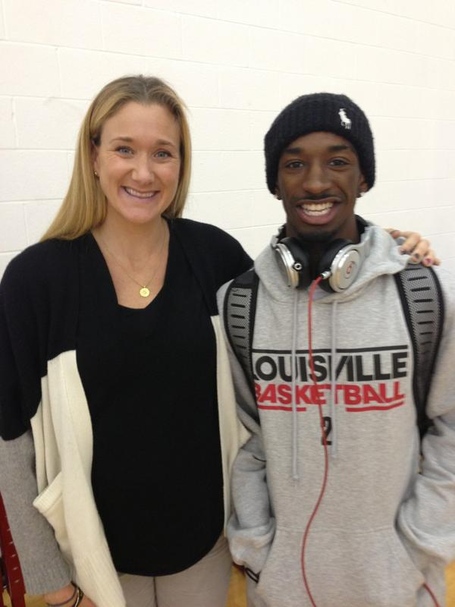 Injuries have been just as much of an issue in recent years for the U of L women's basketball team as they have been for the men. Thankfully, the No. 8 Cards are finally healthy.

Louisville has opened as a 32- point favorite over Samford tomorrow night.

Charlie Strong and the gents have spent this week moving past the Syracuse loss and looking at everything they still have to gain in the final two games of the regular season.

"I think when you're winning every game and you're undefeated, each game gets bigger and bigger regardless of who you're playing because you get closer to having that undefeated season," Benavides said. "Being undefeated was never our main goal. Our main goal is to win the Big East, and we can still do that."

"You're still sitting at 9-1," Strong said. "It's not like you're sitting here at 3-6. They need to feel it a little, and then understand just how important the next two are."

Really mad about Bob Valvano not responding to my demands to drop a "The Gorgster" during yesterday's (Tuesday morning's?) Hawaii game. Dick Vitale has taken to shouting out Matt Jones and Kentucky Sports Radio during every big UK game on ESPN, so I thought Valvano giving CC some love during a Hawaii/Houston Baptist game that started at 4 a.m. would be the perfect response. Way to blow it, Bob.

The Kentucky fan below was apparently very excited to see Louisville lose to Syracuse on Saturday, and very eager to let everyone around him know about it. 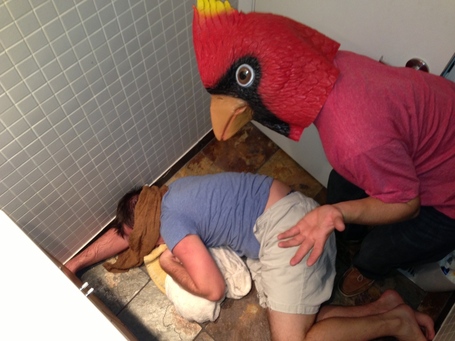 A few facts from the Louisville/Manhattan game via Stat Sheet that we didn't get to talk about:

1. Teddy Bridgewater, QB, Louisville. Something tells me there are not going to be any questions about the winner of this award this season. Bridgewater has been the best offensive player in the Big East this season by a mile. He has been selected as a semifinalist for the Davey O'Brien Award, given to the best quarterback in the nation, and got a little Heisman buzz throughout the year. In 10 games, Bridgewater has thrown for 2,858 yards and 21 touchdowns with five interceptions, and is No. 5 in the nation in passing efficiency.

Not to be outdone, Charlie Strong is leading the Coach of the Year race.

1. Charlie Strong, Louisville. Though many expected the Cardinals to win the Big East, this team probably surprised some by setting the school record with a 9-0 start and a No. 9 ranking in the BCS standings. The loss to Syracuse hurts, but the Big East is still there for the taking.

The women's basketball game against Kentucky on Dec. 2 has been moved from 2 p.m. to 6 p.m. The game will be shown on ESPNU. 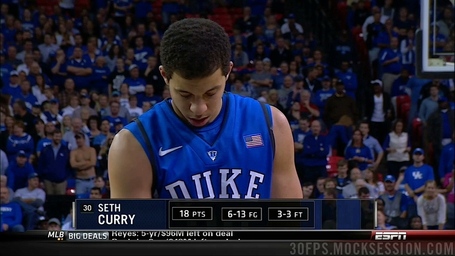 As theyellowbeak points out, all eight participants in the Batte 4 Atlantis are currently ranked or receiving votes. That is going to be a ridiculous three days.

And finally, the NCAA announced earlier this week that second and third round men's basketball tournament games will be coming back to the KFC Yum Center in 2015. They also announced that Madison Square Garden will be hosting games in the big dance for the first time in over 50 years, which is pretty cool.