Share All sharing options for: Akoy Agau Officially A Cardinal

Four-star forward Akoy Agau is the latest member of Rick Pitino's 2013 class to sign his letter of intent. 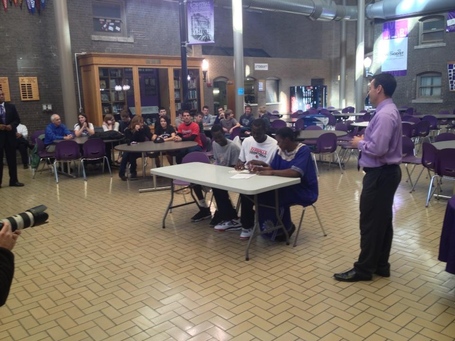 Though still a bit raw offensively, the 6'9, 240-pound Agau has a remarkable skill set for someone his size. As a junior he led Omaha Central High to the Nebraska Boys Class A state championship, recording 16 points, 13 boards and 14 blocks in the championship game. He is considered one of the top prospects to come out of Nebraska in quite some time.

Like current Cards Gorgui Dieng and Mangok Mathiang, Agau has African roots. He was born in the Sudan and lived there until he and his family were displaced by the war and moved to Cairo, Egypt. He then made a move to the United States in 2002. You can read more about Agau's story right here.