Let's get a good cry going for the next hour and then forget this ever happened.

We'll let the tweets tell the story while we fetch another box of facial tissues: 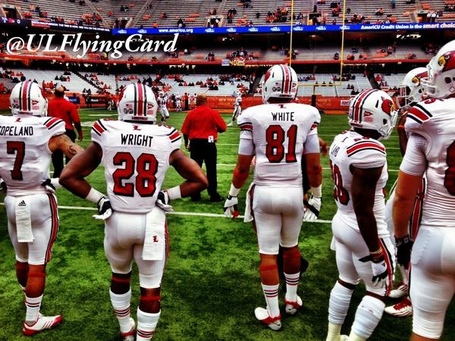 Photo of @uoflfootball preparing to warmup on the field against Syracuse. Almost game time! #L1C4 twitter.com/ULFlyingCard/s… 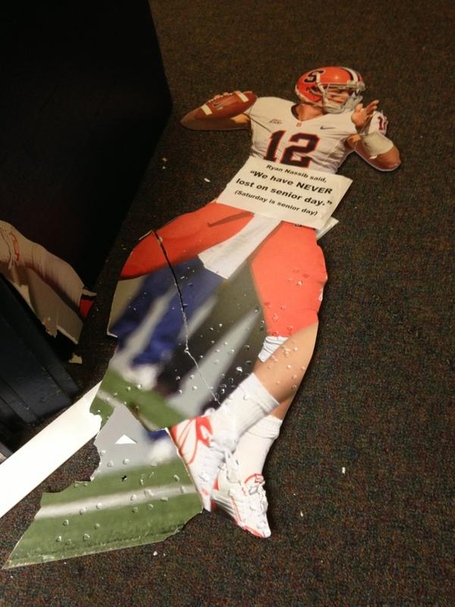 The 4.3 magnitude #earthquake in Whitesburg, KY is about 145 miles SE of #Louisville.

Corvin Lamb takes a screen pass 53 yards for a touchdown, fulfilling the words of the oracle from 2009.

Some of these Syracuse players' tackle attempts are straight from a 90s video game.

Corvin Lamb has 2 TDs on 4 touches this year

The book is out on the Louisville defense: 4th and 1, zone read.

Not quite Kerry Rhodes against Miami several years ago, but Louisville just endured a bite in the backside due to a dropped INT.

#Louisville has allowed an average of 12.9 ppg in the first half this season. #Syracuse has just scored 17. #BigEast #CardNation #Orange

Louisville doesn't have BJ Dubose or Lorenzo Mauldin and it shows.

I'm not worried about Louisville yet.They've withstood a lot of strong starts, just can't turn the ball over again before half

What a catch by Pooda.

Syracuse has the best QB Louisville will see all year. And that includes if they get to the Orange Bowl v. FSU

I'm guessing that third down call was on Teddy. No reason for anything there but to power up behind lead blocker.

They do it again. 3rd down they only rush four, get no pressure, and Nassib throws a touchdown.

Two years ago Nassib threw a long touchdown on the opening drive and Strong said screw it and blitzed every play after. Time for that again.

Waiting for last weeks LVille Football Fan(s) to hit me up? Denny Green line is coming down 24-10 to the Cuse

Syracuse up 31-10 against Louisville; earlier today I wrote about why an upset was possible footballperspective.com/a-guide-to-sat…

Louisville football came into this game 48th in the Sagarin PREDICTOR. But they'd played 9 crap teams and were 9th in the polls.

Charlie Strong was just asked to do an end of half interview by the ESPN sideline reporter. His response: "No."

Louisville has overcome its share of second-half deficits this year, but this would be the largest deficit overcome this season. #ULvsCUSE

Muting the game. Pull us through, Ke$ha

I was bummed I had to work during the game, starting to think it is better for my health to be working now.

This D-Line is horrible. I havent seen any pressure on the QB & they cant stop the run at all.

Before you rip the Big East for what's happening to two of its better teams right now, remember that your conference isn't very good, either

Don't Start Son lol RT "@iam_cam_: Defense put the offense in a tough situation early. Cant play behind like this"

WHO CARES WE ARE DOWN 5 SCORES GO FOR IT

About time. RT @jdubs88: Congrats to @slmandel for locking in his upset pick of the week before 3 pm. #TheCuse

Louisville has stopped Syracuse one time today. It fumbled the subsequent punt.

We have to cut it to 17 to tie the largest ever loss by a Strong-coached team.

Bottom line, everything #UofL fans had feared would jump up and bite their team is jumping, and biting.

COME ON CARDS, I BELIEVE IN YOU

this late in season i doubt it, but also surprised Lamb hasnt run more RT @speed8082: Will they burn D Brown's redshirt b/c Perry's injury?

Even catching the football they make a mistake on special teams.This is just a really poorly coached unit.No more excuses.

I'm legitimately bummed Louisville is going to lose today, you guys. Was looking forward to the least-respected 13-0 team of all time.

It makes absolutely no sense that it took so long to throw the ball down the field.

"@ericcrawford: Fair catch at the 5?"it's official...it's a bad day

Syracuse is going to find a way to lose.

We have the only kickoff coverage team in America that jogs down the field.

College coaches should play NCAA 13 constantly over the spring and summer. Seriously. Can see so many more situations than 12-13 games/year.

The Dome crowd gives their team a huge hand as the 3rd quarter ends. SU leads 38-19 heading into the 4th.

Did he just say Louisville "needs to flip the script?" They tried, but script broke the tackle and broke free on third down.

Syracuse is just obliterating Louisville. Its 45-19 with 11:14 left. The Cardinals just can't stop Syracuse. (It felt weird to type that.)

The new Call of Duty isn't even out till Tuesday AND Louisville has a bye coming up. The Cards are really screwed. #ULvsCUSE

Just landed in Chicago. My goodness, what's happening to Louisville?!

The announced attendance for today's game is 40,312. Good turnout.

Syracuse will likely move to 5-5, its losses will be to Northwestern, USC, Minnesota, Cincinnati, and Rutgers. Those aren't bad teams.

Not going for 2, not going for it on fourth, not kicking onside. I don't agree with these things.

@ericcrawford that's what I'm saying he only had 1 play on offense and that was a touchdown!

The bigger question: how Syracuse is dropping bombs on Louisville or how the shit the Cardinals got in the top 10 in the first place?

Can't even deal with the CC open thread. Its only gonna be 9-1 folks. Still opportunity for best case scenario. Chill.

Teddy Bridgewater throws the INT to end a drive that went deep into Syracuse territory. #ULvsCUSE

Welp. That's ball game. Can still win out and go to Orange bowl. Undefeated was really only a diff of which BCS bowl. This game sucks tho

#Syracuse fans with a "Na na na, hey hey" chant for Louisville as the Orange continue to run out the clock. Less than a minute left now.

@wscii Honestly I don't even think our A-game wins today. Syracuse just played out of their minds.

This hurts us for next year more than anything. Undefeated season would have us high in the polls to start next year.

Not sure any voter could still put them in after that performance. RT @smitty40484: they aren't going to drop 15 spots.

Didn't expect to get blown out, but knew a game like this could be coming.The Cards simply are not a great team.Never pretended to be.

Beat Connecticut, beat Rutgers, go to the BCS and get a chance to make everyone forget about this. That's all.

Now lets just get on with the day