This might look like a Nintendo-themed Halloween party thrown by Cards fans, but it's actually a local business that submitted the picture back in April. This is what they wear every day. Finding employees is not an issue. 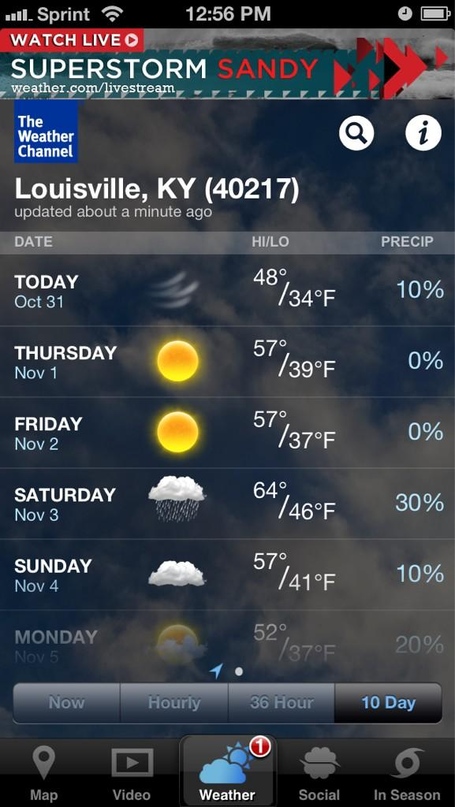 The AP gives a solid preseason preview of the second-ranked Cards.

Despite that concern Pitino is pleased with the defense played by Behanan and his team in general. That's been the coach's career-long philosophy, and this year's squad is poised to be just as good creating turnovers and easy chances.

He certainly isn't worried about the Cardinals' offense, which has multiple options and players eager to work together. No wonder they feel good about winning their first title since 1986.

"It's going to be tough to guard us because we have so many different combinations and so many weapons on this team," Siva said. "... That's what makes this team so good. We've got a lot of depth and are just trying to keep everybody on the same page -- no egos, just going out there and playing for the 'W.'"

Unfortunately, Elisha Justice is not going to be able to suit up tomorrow night when his Pikeville team takes on the Cards.

Great stuff on Peyton Siva Jr. and Peyton Siva Sr. (who recently celebrated a birthday) from ESPN The Magazine.

We have a special, special kid running the point.

There are a lot of questions floating around about how to watch the exhibition game tomorrow night. Here's my breakdown.

--For Insight customers, the first hour of the game will be carried on the ordinary WHAS channel, but when the CMAs begin at 8, the game will be moved to WHAS 11.2, Insight 432 and Comcast 207.

--Viewers who have a television with an antenna will be able to see the full game on WHAS without issue. You can buy a set of rabbit ears at Big Lots or a similar store for about 10 bucks.

--Satellite customers will not be able to see the game until it is re-aired in its entirety after Jimmy Kimmel Live at around 1:05 a.m.

--This will be the only such conflict WHAS will have this year.

Eamonn Brennan takes a look at why the early computer rankings aren't as fond of Louisville as the human polls are.

These ridiculous work hours are killing the CC Bird Mask. 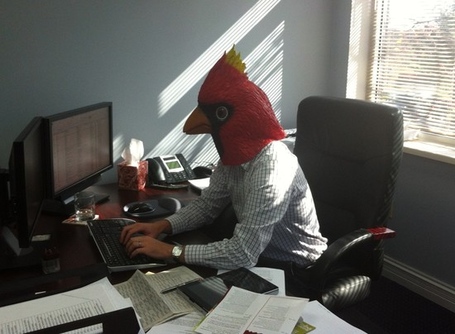 Starting to get pretty worried about him. 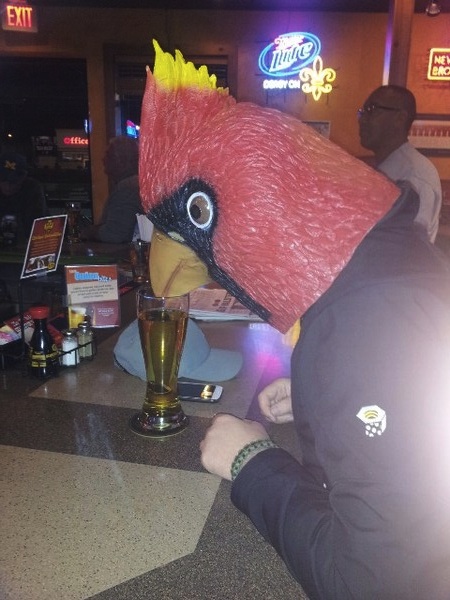 CBS' list of the best defenders in college basketball includes Gorgui Dieng, but not Russ Smith.

GORGUI DIENG
C | 6-11 | JR | LOUISVILLE
"He is in the perfect defensive system for a guy like him -- who has great timing on shot-blocking. Their press as well as their matchup zone funnels everything to him -- and he's always in position to protect the basket."

Rick Pitino appeared on the Jim Rome show Wednesday afternoon and talked a little bit about his contract extension and a lot about horse racing. You can hear a replay (I believe you have to pay) right here.

The Louisville baseball team, which will be playing in an expanded Jim Patterson Stadium this season, has announced its 2013 schedule.

No idea if Dick is joking or not.

The Big East men's soccer tournament bracket is set, and the Cards will be hosting either Cincinnati or Marquette in the quarterfinals at Cardinal Park on Nov. 3. The match is set to begin at 7 p.m., and admission is free for anyone with a U of L/Temple football ticket stub.

Against Temple, the Cards will be facing a run-heavy offense, which is something they haven't seen very much of through eight games this season. 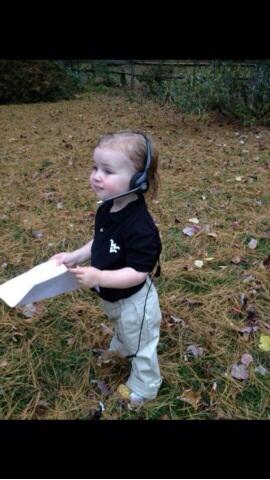 CBS likes Louisville to take care of business against Temple in convincing fashion on Saturday.

Magic number for Temple: 26. Although it has been rough sledding at times this season for the Owls, Temple has a school-best 26 wins over its past three seasons. The Owls likely won't make that number 27 Saturday, but they are certainly trending in the right direction.

Magic number for Louisville: 9. The Cardinals have a chance to run their record to 9-0 for the first time in school history.

The game comes down to: Scheme. Having coached together at Florida for two national championships, Charlie Strong (defense) and Steve Addazio (offense) have an idea of what to look for Saturday. Even if Addazio somehow gets the schematic advantage on Strong, the Owls will have a lot of trouble winning this one. Still, they can keep it close if they're able to be effective on the ground.

The Cardinal Connect says former walk-on George Durant is making the most of his opportunity to start at linebacker for the Cards.

The U of L swim team is bringing in a monster class.

Wayne Blackshear, who is currently coming off the bench for Rick Pitino, checks in at No. 10 on NBC's list of the best small forwards in the country.

10. Wayne Blackshear, Louisville: Blackshear spent much of last season dealing with a banged up shoulder, but when he finally got healthy, he was a weapon for Rick Pitino's team. Depending on how the team uses Luke Hancock (who is banged up as well), Blackshear may end up being more of a shooting guard, but his value doesn't change: he's a big-time perimeter scorer and shooter that isn't as out of control as Russ Smith.

If you missed the story earlier, Rick Pitino's "South Floyd" is running in the Breeder's Cup on Friday.

Because it's his big night (and because you guys get really mad when you send these in and they don't get posted on the site), even more bird mask photos. 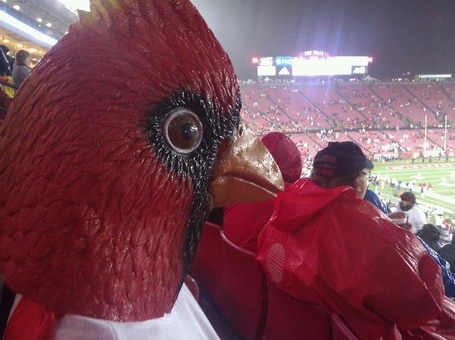 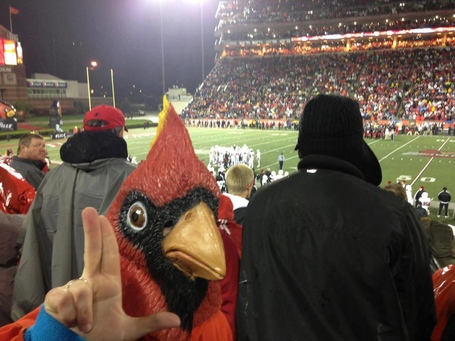 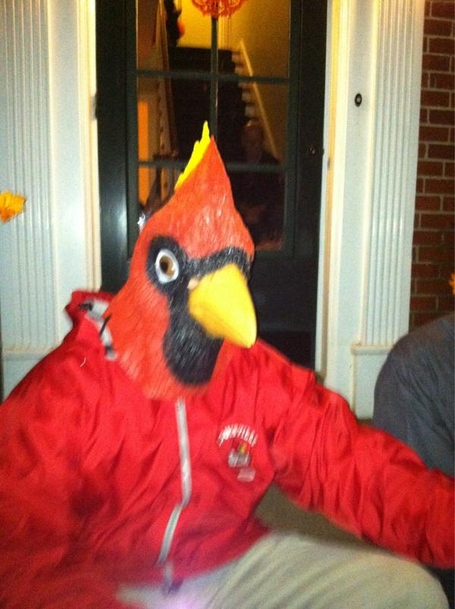 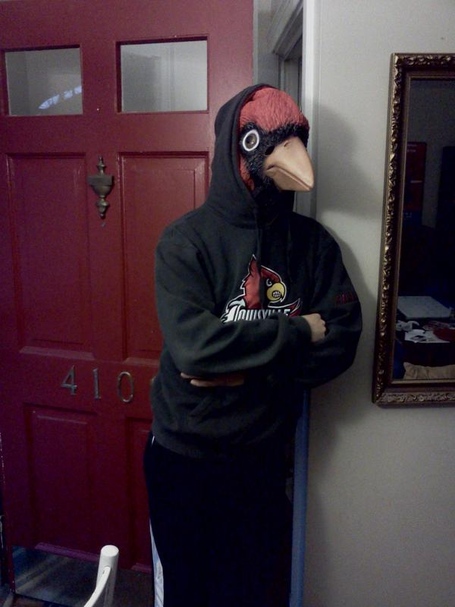 Peyton Siva has been nominated for the 2012-13 Senior CLASS Award.

Make sure to enter the CC Pikeville/Halloween contest before tip-off tomorrow night.

And finally, Eric Crawford's latest piece on Rick Pitino is a must-read.