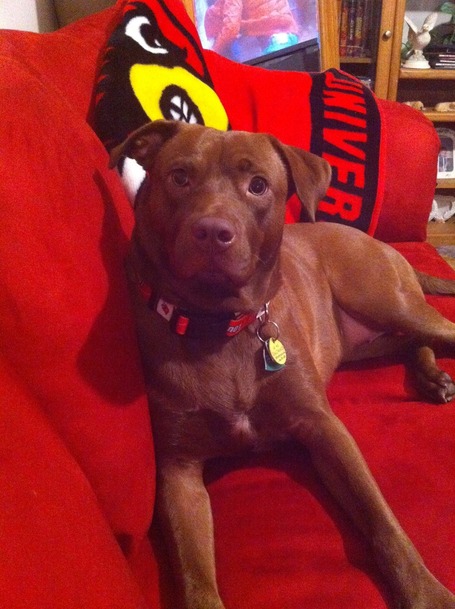 Dixie with an expression representative of all Louisville basketball fans/U of L students this morning.

One of the most disappointing aspects of Saturday's loss to Notre Dame was that it largely overshadowed one of the biggest recruiting days in the history of Cardinal football.

Not only did Louisville receive commitments from four-star linebackers Keith Brown and Nick Dawson, but the commitments were made during the nationally televised U.S. Army All-American Bowl. That's some decent exposure.

Get on board or get out of the way.

It was nice to see a guy like Preston Brown celebrating the commitments on Twitter and then talking about how everyone has to fight for their job. The whole culture of the football program is more positive and enjoyable than I can ever remember, and that's all a testament to the complete overhaul Charlie Strong and company have done since arriving almost exactly two years ago.

A few people have asked if DePaul Day(1) will be canceled if the Cards lose (or are played extremely close) at Providence.

As if what happened on the court wasn't bad enough on Saturday, the following couple of hours were arguably just as disheartening.

First, you had Chris Smith talking after the game about "outside influences" and players listening to their families more than Coach Pitino; then there was Peyton Siva saying "you're never going to be 100% in this program" when asked if his ankle was back to full strength; and then finally there was Kevin Ware's dad going on Facebook and calling for the benching of "Silva's bum ass."

People will talk about all this stuff being "overblown," but the fact of the matter is that there are off-the-court issues plaguing this team. And that would be apparent even without these postgame happenings or Pitino's comment a couple of weeks ago about Siva having his mind on things other than basketball. This team doesn't appear to be having nearly as much fun playing basketball or being together as last year's did. I have no idea what the fix for that is, or even if there is one, but it's obvious something has to change soon for these Cardinals to have any hope of attaining any of their preseason goals.

Things like attitudes, egos and playing time were never an issue a year ago, and the result was one of the more pleasantly surprising teams in the history of U of L basketball. If this group doesn't come together now and figure out how to fix whatever issues have been holding it back for the last couple of weeks then they're going to be in danger of going down as one of the more disappointing Cardinal teams in recent memory.

Via HotHot on Twitter: On KenPomeroy.com, Louisville's adjusted offense dropped to No. 105 and its overall ranking slid to No. 25, both season worsts. Adjusted defense is ranked 4th, however. 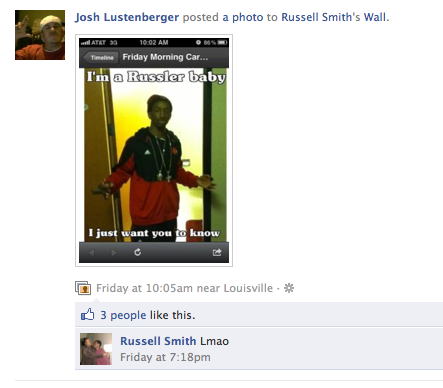 The Cards are No. 22 in the Rogers Poll. I'd expect them to land somewhere between those two rankings when the AP and coaches' polls come out this afternoon.

Heading into Saturday's game, Russ Smith ranked No. 2 in the country in a set of efficiency rankings which attempt to measure which players help their team the most when they're on the floor.

Stephon Ball posted the following picture of his teddy bear under the heading: "Teddy got swag." 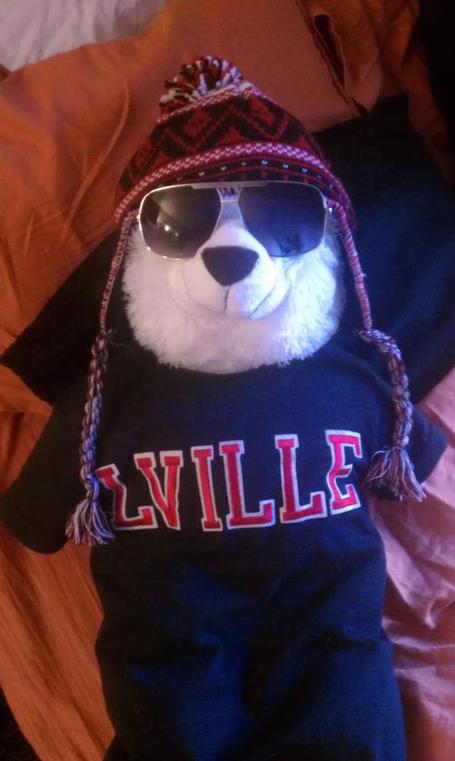 Terry Rozier, Louisville's one-man recruiting class of 2012, gave a monster performance at the Villa Classic over the weekend.

Shaker Heights 81, John Hay 78: Rozier finished with a tournament-high 41 points, including 11 of the Raiders' final 15 as they raised their record to 9-1. The 6-2 senior made 11 of 18 field-goal attempts, four of eight 3-point shots and seven of nine free throws. He also had six rebounds and numerous assists. His two free throws with 30 seconds left clinched the win for Shaker Heights, ranked sixth in The Plain Dealer Top 25.

"Terry is a phenomenal player, and I'm just blessed that I've been able to spend this time with him and see him develop into the great player he has worked himself into," said coach Danny Young. "The players know he cannot only make plays for himself, he can make plays for others as well. It's nice knowing you have a point guard who can take over a game and get you a 'W' when you need it."

Louisville has offered a scholarship to Avon (OH) cornerback Ross Douglas, a member of the class of 2013. Douglas is close with 2013 QB commit Kyle Bolin of Lexington Catholic.

I was also happy to see that the Rivals page on Trinity junior cornerback Ryan White has been updated to show a U of L scholarship offer. Coaches at Trinity and around the city could not have higher praise for the kid, in fact, I was told by more than one that White was the top overall player on that Shamrock team which many labeled the best in the country. That's pretty high praise.

Part of the reason that's such high praise is because White plays on the same team as Louisville recruit James Quick, who was recently named a first team All-American by ESPN.com. Quick was the only Kentuckian honored by the world wide leader. 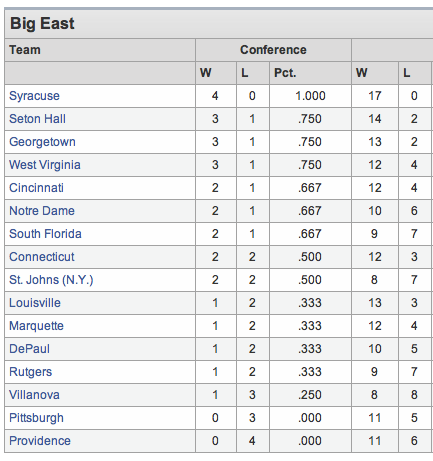 Just like everybody drew it up before the season.

Grantland has a short history of the evolution of those big heads you now see in just about every student section in the country.

The 14th-ranked Louisville women's team suffered its first Big East loss when it had its six-game winning streak snapped by St. John's. Not a great basketball weekend. 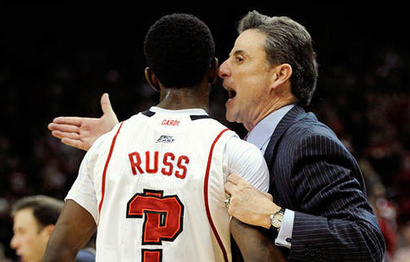 A lot of people have wondered if five-star Georgia athlete Josh Harvey-Clemons is actually serious about Louisville, whom he lists in his final four schools. He says he is.

Some people have questioned if Harvey-Clemons is serious about Louisville. UL, at least in football, traditionally does not have a lot of luck recruiting against SEC schools.

"Louisville is right up there with the rest of them," Harvey-Clemons said. "No, they're not in the SEC but it's no big deal. I feel like I have a chance to play early at Louisville. I like coach [Charlie Strong] a lot. I feel like they are building a strong program. My roommate at the all-star game has committed to Louisville and has talked to me a lot about coming there."

Everything I've read makes it seem like JHC will ultimately pick Florida, but it's still fantastic to hear one of the top recruits in the country to speak so highly about U of L.

And if we do land him I'm hosting a pantsless party at Ten Pin. Why Ten Pin? Why not Ten Pin?

And finally, a nice tidbit to end your notes with from CardGame on ITV:

One of Louisville's 2 national championships, 4 of their 8 their Final Fours, 6 of their 11 Elite Eights, and 13 of their 22 Sweet Sixteens came in seasons that began with 3 or more losses in the first 16 games.

I find your lack of faith DePaulling.