--Knows that Notre Dame lost some guys, but they also seem to be able to replace the guys they lose with players of similar skill level.

--We have to play just about every top team in the Big East on the road, which made losing that opening game to Georgetown even more of a blow. Protecting our home floor from this point on is key.

--Thought Kevin Ware played well against St. John's and expects him to play more and at different positions going forward.

--Ware has been practicing some more at the three, but he's not ready to play there right now. Chris Smith would probably be a better backup option for Kyle right now.

--Don't expect to see much of Wayne Blackshear this season. He's really out of shape and Pitino again blames himself for not monitoring his weight more. He hasn't played basketball in almost a year and is a long, long way away from being able to step on the court in an actual game. He's not ready to practice right now, even if he gets cleared (meeting with doctors next week). If anything, he might be back for the Big East Tournament.

--Doesn't have a problem with the offense right now, but thinks our defense is the problem. The defensive statistics are good, but we are not a good defensive team. The offense is OK.

--We played very well against St. John's, we played 36 minutes of good basketball. The St. John's game was an instance where we played very good defense. We also did a really good job of playing in transition.

--Gets pretty mad when asked back-to-back questions about Ken McDonald being fired and the possibility of losing one of his assistants after this year.

--The 2017 "retirement date" comment from a few weeks back was a joke. He said it in jest and then he goes home and sees it all over ESPN, so he's not going to play that game with the media anymore. He's just going to talk basketball.

--The loss of Preston Knowles is the biggest reason for the team's struggles from 3-point range. People keyed on Preston which left them open for shots and that's not happening this year. They aren't off-the-bounce guys so they have to find ways to get themselves open by moving without the ball. 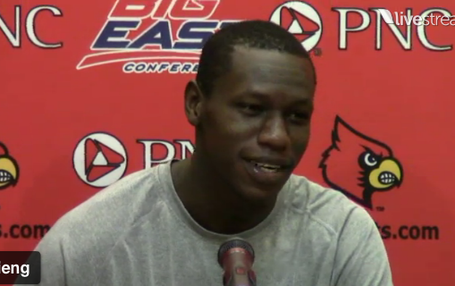 --Last year he didn't understand how physical the Big East is, but this year he and his teammates know every time they step on the floor it's going to be a war. They know they have to bring it every single night in order to get a W.

--Thinks the team is playing much better basketball right now. They're playing with much more pride on defense and passing the ball much better on offense.

--Doesn't think the offense is struggling right now. Some of the young guys are still learning the plays.

--Thinks we played better defense against St. John's and thinks we're going to keep getting better and better on that end.

--The team learned a lesson from losing to Georgetown at home. Now knows it has to protect its home court in Big East play.