The fans, players and coaches of any "good" team in the midst of a two-game losing streak are always looking for comfort and confirmation that they are, in fact, "good" from that third game.

It wasn't the tremendous overall performance some seemed to be almost demanding, but a 15-point road win over a St. John's team that has already beaten Providence by 24 should serve as an adequate reminder that the Louisville Cardinals are a good, if not great (yet), basketball team.

On top of that, the Garden isn't a place where U of L typically plays all that well, especially against St. John's. The Cards had lost two straight to the Johnnies in MSG, including that 18-point throttling a couple of years ago.

Again, it wasn't perfect by any stretch of the imagination, but it didn't need to be. Everyone involved with the basketball program needed a bit of a confidence boost after last week, and a 15-point Big East road win is generally an adequate prescription.

After racing out to a quick 8-2 lead, St. John's missed 26 of its next 27 shots. Louisville played tremendous defense on a lot of those possessions, but there were also a handful of wide open misses by the home team. There was one point in the first half where I actually tried to imagine I was a Red Storm fan in an attempt to make myself feel better about our own shooting woes. I started talking with an accent, went outside and complained about the lack of cabs...I don't know, it was bad.

Let's be honest, when this whole "Russ Smith Thing" (that's it's official name, by the way) started, it was way more funny than it was serious. Right now, I'd say it's about 75/25 in favor of serious. I mean, as of this second, Russ Smith is 0.4 points per game away from being the leading scorer for the No. 10 team in the country. And he's doing more than just putting points on the board for us.

Look at Russ's stat line from last night: 17 points, 6 assists, 4 steals, 4 rebounds. And that's off the bench in just 23 minutes of floor time.

He's still going to do some hilarious "Russ Stuff," but the honest fact of the matter is that this team absolutely needs him on the court in order to win games.

As for the funny side of Russ...

"Omaha. Pinned down there on that god forsaken beach. But one man broke through...Russell!" 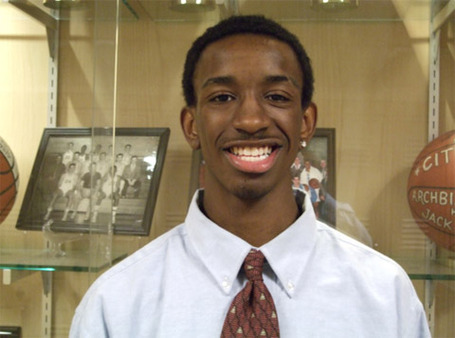 It's all I can think of when I see that picture, and it's my new favorite thing.

Also, I'm extremely close to starting a petition to get the "R. Smith" on the back of Russ's jersey changed to simply "Russ." It needs to happen.

St. John's either ignored or didn't watch the UK game tape, because they left Kyle Kuric and Chris Smith alone on the perimeter just about every time Siva or Russ got into the lane. The pair went a combined 5-of-14 from three, but honestly the 14 attempts were probably more refreshing than the five makes.

The equation for good teams to shut us down on offense seems relatively simple: stick defenders on Chris and Kyle and don't let them leave either's side; try to keep Siva out of the lane by giving him the outside shot; if Siva does get into the lane, have the four or the five man slide over to help and make one of U of L's big men prove they can finish around the basket. The result, with the right defenders, is apparently Russ Smith scoring nearly half of the Cards' relatively low final total.

I, for one, and am glad the Big East is a majority zone conference.

Every now and then I think we all take Gorgui's remarkable progression for granted. This is a guy 14 months ago who people were talking about the same way we talk about Zach Price now. As it stands, he's one of the preeminent big men in a conference known for superior post play. 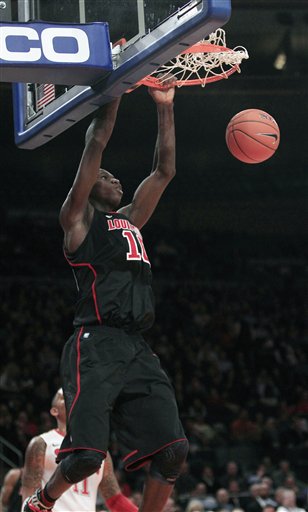 Dunkin' Gorgs has to be one of my 25 favorite Gorgs.

I felt a little sad looking at Steve Lavin watching the game from an elevated luxury suite. I didn't feel any bad looking at Mary Lavin next to him. Babe City, USA.

This was Peyton Siva's fourth bad game in his last five outings. I have no idea what the deal is, but if his mind really is focused on something outside of basketball (which Pitino asserted a couple of weeks ago), we need him to get it figured out quickly.

He's doing all of the things that have plagued his college career to this point - fouling at midcourt, falling down too much, making unnecessary passes in transition - and far fewer of the things that had some predicting he would make the jump to the NBA after this year.

The poor shooting is one thing, but Peyton just looks like a guy not having fun playing basketball right now. He looks annoyed every time Pitino tries to tell him something, he's shocked when he's called for silly fouls 50 feet away from the basket, and he gives off the impression of a guy waiting for good things to happen instead of a guy determined to make those things happen himself.

Whatever's going on (if anything is going on), it needs to get straightened out, because this team is still only going as far as Peyton Siva can take it.

Hearing Chris Smith talk multiple times this season about NBA scouts and wanting to play for money some day has been a little disheartening. It's not that he shouldn't want to play in the NBA, it's just that I think the absence of that mentality a year ago was a large part of the reason why he was such a pleasant surprise.

I feel like if we could get the ghost of NBA seasons future to visit Chris and let him know that this isn't going to happen then he'd get back to doing all of the little things he did a year ago that earned him so much unexpected court time. Either that or J.R. needs to appear to him in a vision and give him the Mufassa "remember...remember who you are" speech.

Both would probably work. 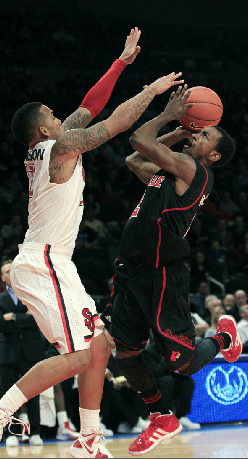 Cards did a terrific job on Moe "How Could You Be So" Harkless, who attempted 13 shots but made just four of them. The "freshman phenom" - as ESPN dubbed him before the game - also turned the ball over three times.

During one of his preseason media addresses, Rick Pitino talked about how the abundance of video tape has made it easier to be a basketball coach now than ever before. He singled out the example of "if you need an out-of-bounds play, find a tape of Marquette and you can learn three new out-of-bounds plays just like that."

I think it's time to go to the tape.

Every time we have an inbounds situation from underneath our own basket, it seems like our four guys take a couple of half-hearted steps and then we're left with two options: 1) Gorgui in the corner where he gets the ball and then no one comes to help him. 2) A long pass to our point guard at halfcourt where he's basically in a jump ball situation with an opposing defender.

It just feels like it's an adventure each and every time we try to throw the ball inbounds, and that adventure has ended poorly far too many times for nothing to change.

Chane Behanan had three made field goals last night and I believe they were all dunks. The growing comparisons to Samardo have been coming for the last couple of weeks. He's got to cut out the unnecessary power dribble, and he's got to start finishing in semi-contested situations around the basket.

I'm still not entirely sure where Kevin Ware can help us the most, but last night offered the first clear indication of what he brings to the table. He's not a great ballhandler and he's definitely not a great shooter, but he has the potential to be a great passer and his height and length allow him to make some passes that none of our other guards can. I don't think he can be relied upon to be the primary ballhandler against a good, pressure defense, but he could definitely be a very solid accent to Russ or Peyton for extended periods of time.

Ware looked fairly lost on defense during several stretches, but again, once he figures out what he's supposed to be doing his length and athleticism will make him an asset on that end of the floor.

Welcome to the fold, Kevin.

I'd expect to hear Pitino offer significant praise for Ware at some point before the Notre Dame game. I think he knows exactly what his players need to hear. It's why he can say things like "Russ didn't play well" after last night's game and not think twice about it. I mean Russ is a guy who Pitino himself recently said isn't bothered by much. If that's the case, then there's really no point in hyping him up.

The man knows when to motivate and when to boost someone's confidence.

The casual Mike Marra three sign from the bench during one of Russ's last treys was one of the best moments of the season so far. 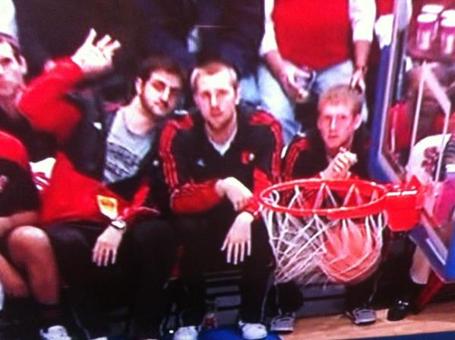 And the screen cap doesn't really do it justice. The slow-mo replay heading into break was pure art. This is why we bring him to road games.

I think everyone who's read this site for an extended period of time knows I love Bill Raftery. That said, Raf gave a rather underwhelming performance last night. It just seemed like he and the play-by-play guy (Adam Amin? I'm too lazy to look it up) were wanting St. John's to be far more into the game than they actually were. The talk about the Johnnies "not giving up" and making "one last run" when they were down 18 with three minutes to go just seemed a tad forced.

I'll never tire of "she sounds hideous"; "well, she's a guy, so..."; but I also really need to know where I can get a high school degree on my own time. And I'd prefer to have that information presented in the form of a catchy jingle performed by a 20-something female who most likely did, in fact, graduate from high school.

I'm also into brownies. And pans. And perfection.

I'm not sure if it's an issue of him coming back too soon, but Rock hasn't looked like the Memphis game Rock since...well, the Memphis game. I know he's not 100%, but we still need to get him rebounding and back into some sort of offensive flow, because right now he looks really disjointed.

Another very solid effort from Jared Swopshire, who reportedly told Rick Pitino before the game that he was going to get "10 or 12" rebounds, and finished with nine in just 19 minutes.

I can't believe I'm about to say this, but I'm not sure Bullet can pull off this new black jersey. I don't know if he needs to go all white or all red shoes or do something else flashy (headband?...please God, headband), but last night he definitely looked overwhelmed by his uniform.

You have to steal a handful of road wins in order to finish in the upper echelon of this conference, and the Cards are now one-for-one. That's always a big deal.