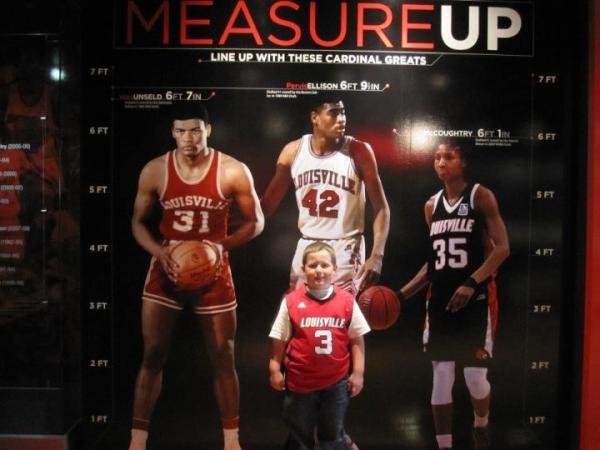 Without question, my favorite part of the Yum Center is the Wes Unseld/Pervis Ellison/Angel McCoughtry/Young White Juan Diego Tello Palacios "measure up" wall.

Little known fact: Juan was just 4'1" when he got to Louisville...and he was white. It's hard to believe he played such a major role on that Final Four team.

Don't be surprised if: The name Lamar Atkins is mentioned in the coming days. He's the brother of Keith Brown, who already has enrolled. Both committed to Illinois before Brown switched to the Cardinals. Atkins, a 6-foot, 205-pound linebacker, isn't on Illinois' commitment list.

Sleeper recruit: Because he sat out his senior season with a knee injury, some have forgotten the huge potential of quarterback Will Gardner. He threw for 1,400 yards and 14 TDs as a junior and picked U of L over Alabama and Mississippi State.

The main recruit on the board that U of L is targeting seems to be Ohio cornerback Sean Draper, who is also considering Pitt, Iowa and Kansas. Some seem to think that the Jayhawks have the inside track because they're also willing to offer a scholarship to a teammate and friend of Draper.

The Louisville women's team jumped from 16th to 14th in this week's AP poll. The ladies get DePaul on Tuesday.

Also of note is the fact that the women's team currently ranks third in the nation in attendance.

The Cards are a seven seed in the Midwest playing Alabama in the latest SB Nation Bracketology. Lunardi has Louisville as a nine.

Received word earlier today that the Louisville Magic will be expanding this summer to include teams for the 15u, 16u and 17u divisions. The Magic's 15 and under team, you may remember, had great success on the national circuit a season ago.

Former Cardinal Ellis Myles is the director of the program.

Ryan Adams tonight at The Palace. You can go ahead and attribute any typos in this post to the massive erection that keeps hitting the laptop while I'm trying to type.

Problem? Well then, You never knew me but you did your best. I'm just lonely inside I guess. You gave me everything, you really tried...Thanks.

Speaking of Louisville being dreamy, check out this amazing shot of downtown that a friend sent me this morning.

I don't know anything about him, but the artist/photographer's name is Rich Hoyer.

There's seriously nowhere in the world I'd rather live, and I couldn't be more grateful that I was placed here.

Rutgers landed a monster hire today with Florida International's Mario Cristobal (remember him?). Looks like Louisville has some more competition in Miami.

I'm not sure Cristobal won't wind up being an upgrade for them.

But it would be so unlike Rutgers to blow something like this.

Indiana is making a late push for Louisville OL commit DeAndre Herron out of Avon High School in the Hoosier State. The big man stated on Twitter that IU offered him a scholarship today and then made some statements that made it appear as though he may be about to flip.

Again, we shall see.

I've woken up every morning for the past year and-a-half wanting one thing and one thing only: to see Kyle Wiltjer wearing a platinum uniform. 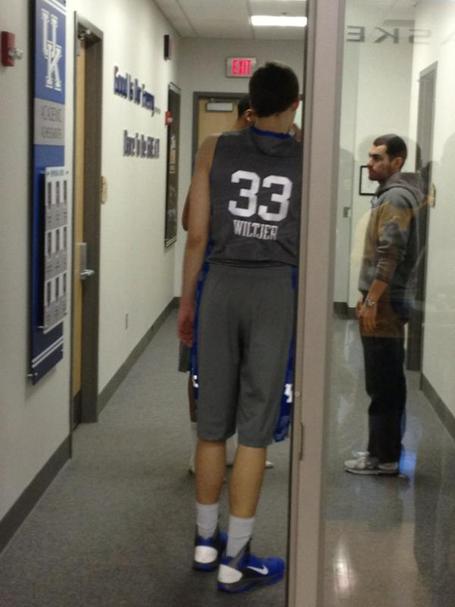 I guess all there's left to do now is travel and write.

Gorgui Dieng was recently named as one of the five members of Dick Vitale's "All-Swat Team."

Louisville's Gorgui Dieng has not been playing basketball that long, yet he is a big positive for Rick Pitino's Cardinals. He will get better and better with even more experience, which should scare Louisville's opponents.

Speaking of Dieng's affinity for the rejected shot, Gorgs is currently on-pace to break Louisville's single-season record for blocks.

With nine regular season games remaining, Gorgui Dieng is on pace to break the school record for most blocked shots in a season. Pervis Ellison currently holds the record with 102 which was set in 1988. Dieng has blocked 74 shots this season and is averaging 3.4 per game.

Your daily dose of Russ: 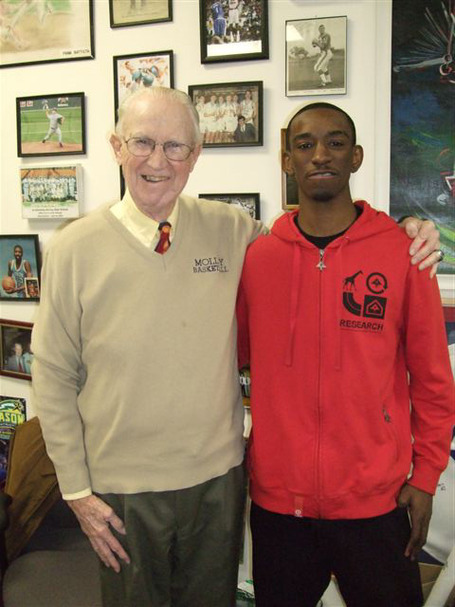 Need it more this week than ever.

Peyton Siva's game-winning lay-up against Vanderbilt is up for the Geico 2011-2012 College Basketball Play o the Year award. You can vote for Peyton on Facebook.

Four of the recruits likely to sign with Louisville on Wednesday missed their senior seasons, three because of torn ACLs. Your move, basketball.

The Big 12 is going to stay at ten teams for now. Does "now" mean this week of the next 25 years? No one knows, but we should probably spend 3,000 more words on it.

Tyler Gabbert (remember him?) is reportedly going to end up at Central Florida. The Knights play Missouri next season. Should be interesting. Also sounds like a great fit.

A good story on Louisville's Becky Burke from her hometown of Scranton. 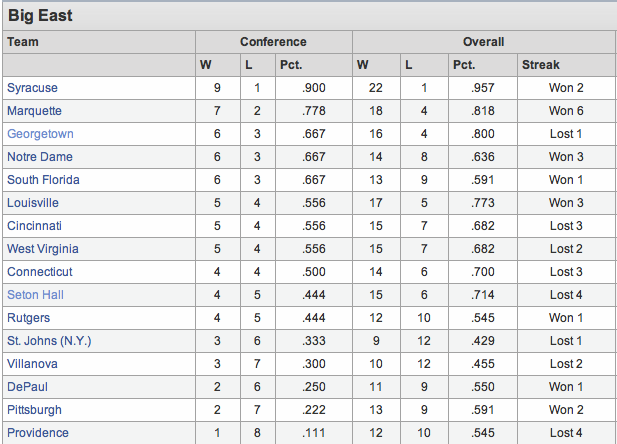 The nationally-ranked men's tennis team took a tough loss to VCU over the weekend. Shaka Smart can f'ing coach, man.

And finally, Kyle Kuric and Colin Rolfe are among the U of L athletes up for individual performance of the year. You can vote for your favorite here.