Obviously, I wanted to get to this sooner, but it's been a busy couple of days at the dot com and this death flu forced me to throw a Nyquil party (the worst kind of party) around 8 o'clock last night.

Anyway, I'm going to rehash the lead-in I typed out Wednesday night and then we'll hit on what took place relatively quickly...

The biggest step in making the jump from "in a rut" to "on a run" is restoring confidence.

From Louisville hitting eight straight free-throws with the game in the balance, to Peyton Siva burying four outside jumpers, to Jared Swopshire making two key offensive plays in the closing minutes, to Chane Behanan dominating the paint in the second half; U of L's 84-74 win over Villanova was far more important than the final score indicates.

Is this where we hoped the Cards would be on Jan. 25? Absolutely not, but this team is just now learning how to play with the pieces it has, and because of that these last two games could not have been more valuable.

At 2-4 in the Big East and with so many players out or dealing with injuries, I think all most of us wanted was for this group to give us somehope that substantial success in February and March was at least possible. I think that's happened now.

Double digit wins over Pitt and Villanova aren't anything to write home about, but Peyton Siva looking like a guy with restored confidence,Gorgui Dieng getting 13 and 14 rebounds a night, Russ Smith learning when to make a pass in transition; those things are.

You don't have to strain so much anymore to see the light. It may not be as bright as any of us hoped it would be before the season, but that doesn't change the fact that it's there.

Peyton learned how to shoot. Uh-oh.

Major shoutout to Rob Hickerson, aka "Jacket Waiver" for making his triumphant return and absolutely owning the crowd in the second half. The Cards controlled the game from that point on, and the Yum Center faithful were as vocal as they've been all year.

You're the man, Jacket Waiver.

Speaking of the crowd reaction, seeing this when I got home from the game made me pretty upset:

Nevermind that this team has struggled recently because of a rash of injuries, or that the player who drilled the dagger is a well-liked veteran who has seen his playing time drop drastically after dealing with his own injuries, OR the fact that the opponent in question has been one of Louisville's biggest nemeses since joining the Big East.

Glockner's one of the worst "take shots at passionate fan bases to get attention" offenders in the national media, and this is the third or fourth blatant case of him doing so with U of L this season. I'd say the best thing to do is ignore him, but now that would obviously be a "do as I say, not as I do" situation.

Louisville fell in love without itself a little after racing out to a 19-11 lead, and result was an extremely offensively talented Villanova team dropping 44 in the first half and carrying a five-point lead into the locker room. It was really encouraging to see the Cards regroup and hold the Wildcats to just one field goal over the first six minutes of the second half.

This team has to win games with its defense, and it's important for them to remember that even on nights when their shots are falling.

The biggest evolution in Chane Behanan's game over the past couple of weeks has been the elimination of "The Samardo Power Dribble." Three times he was fed the ball around the rim with a chance to score, he dunked it twice and scored and got fouled the other time. On none of these occasions did he put the ball on the floor. It's a hard habit to break for big guys, but it's really helped Chane's finishing ability recently.

It also appears Rick Pitino did in fact make an appearance at Chane's class the next morning:

Easily the worst officiated game of the season, and I would have said that if we'd lost or won by 40. Those guys were absolutely pitiful.

At one point, one of the officials was defending himself to a fan in the crowd while 'Nova was shooting free-throws. Because that's professional.

With its offensive confidence lacking, I'm not sure Louisville could have faced a better pair of opponents than Pitt and Villanova. Both teams play really, really poor defense, and the result is several Cardinals heading into this key stretch feeling much more confident about their games.

It sounds weird to say, but U of L is going to get a much stronger defensive test from Seton Hall(?) than either the Panthers or Wildcats gave them.

Another solid effort from Gorgui Dieng, but he didn't find the same balance between cautious and aggressive that he did against Pitt. There were at least three times where Gorgs allowed his man to catch the ball deep in the lane and then just sort of let him score because he didn't want to foul. Obviously we need Dieng on the floor, but not if he's just going to surrender two points.

You have to remind yourself that Gorgui is only a sophomore who is still learning how to play basketball. Looking at how far he's come in just the last 14 months or so is remarkable, and one of the biggest reasons to be optimistic about the future of Louisville basketball after this season.

The crowd was terrific as a whole, but I'm going to call out the student section really quick for only being about 16% full during the national anthem. I know it was rainy and traffic was bad, but that was pretty pathetic. You brought in when you had to, but that section should be at capacity by the time ten 'til rolls around.

It was good to see the team put up 84 points and win by double digits on a night when Kyle Kuric didn't give his best shooting performance. You have to be able to win in a multitude of different ways to be successful in the Big East, and this team is finally coming around in that regard.

Russ Smith: five assists and four rebounds in just 16 minutes. I was floored that he found Chris Smith for a three on that first half breakout. I would have bet just abou every dollar I own on his going up with that ball, but it appears Passin' Russ is here to stay.

Pitino said after the game that they wanted to goad Maalik Wayns into picking up some offensive fouls and that's how two of his four came. Great job by the staff to recognize that tendency in him and by the players to make that plan come to fruition.

Also, he's one hell of a scorer.

Russ kind of looks like a soccer player here: 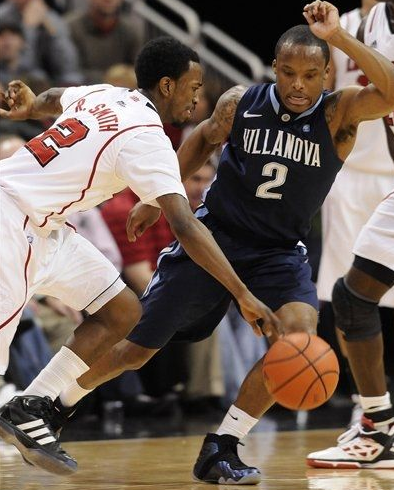 Digging the undershirt backcourt though.

Underguards? No? We'll keep working. It's a long season.

Outside of the Scottie Reynolds game, it seems like someone totally random for them goes off on us every year. That said, James Bell's 14-point, 13-rebound game does not surprise me at all.

I'm not sure a shirt, bag of peanuts or ball has been tossed within 100 feet of me at a home game all season. We haven't lost with me in attendance since the UK game on New Year's Eve, 2010. Show some respect. Throw me some damn peanuts.

I'd forgotten how much I'd missed Swop's voice until I heard him on the radio after the game.

I'd like it known that if this illness kills me, my only wish is for Jared Swopshire to speak at my funeral. I don't care what he says or if he even mentions my name, I just want him there and speaking into a microphone for at least two minutes.

Russ missed his first two jumpers short, so on his third he put what appeared to be his entire body into the shot, over-exaggerated his follow through, and missed long by approximately seven feet.

At least he recognizes problems and tries to fix them.

For all the fan unrest and "issues" surrounding the team, Louisville is 16-5 and winners of three out of its last four.

Find a way to finally win at the Prudential Center, and suddenly some cautious optimism is going to start re-spreading throughout the Derby City.