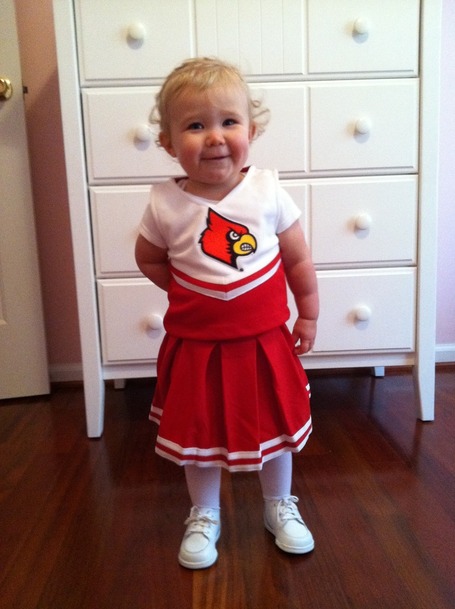 Now usually Stella Gilles doesn't do this, but uh, go 'head on and break 'em off with a little preview of the remix.

In case you missed this tidbit in the DeJuan Wheat/Lancaster Gordon post, Louisville's Feb. 13 home game against Syracuse will be a "White Out," while Senior Day on Feb. 29 against South Florida will, per usual, be a "Red Out."

Now I'm going to repeat this again with the faint hope that doing so will prevent the same question from coming up 45 times once February rolls around: Feb. 13 against Syracuse is a "White Out," Feb. 29 against South Florida is a "Red Out."

Now which one of you can tell me who invented the cotton gin?

Mark Ennis and I will be back on the radio tonight from 7-9. You can listen live on ESPN Radio 680 AM or stream from your computer on ESPNLouisville.com.

Am I going to call out a member of the local media live on air? I mean I'm not planning on it, but I guess there's a chance.

At a 3 p.m. press conference today, the Big East will announce that Navy will join the conference as a football-playing member in 2015.

On a related note, in 2015 I plan on flying to Louisville's Big 12 away games on my jetpack.

Gill led all scorers in the game with 28 points. Kid has a stroke.

West Virginia announced on Monday that their Feb.11 home game against Louisville is a sell out.

*Blows kisses to the Mountaineer cheerleaders*

Louisville commit Dequan Ivery made a surprise visit to Miami over the weekend and now says it's a "50/50" battle between the 'Canes and Cards to land his services. The three-star defensive tackle committed to U of L on Dec. 7.

Also wavering on his commitment is two-star defensive end Pedro Sibiea, who might be headed to Minnesota now.

On board or out of the way.

If Louisville were to win the national championship this year, it would become the first team to do so while also losing a regular season game by more than 27 points.

Yes, I just linked to something else that I wrote. Not Too Proud to Linkturbate would be the title of my autobiography.

Friday is without question my favorite Puppy Bowl starter.

VUHoops.com takes a look at tomorrow's game between Villanova and Louisville.

Like Pittsburgh, Villanova is a mirror-opposite of the Cardinals. While Louisville has been strong on defense, they have struggled on offense this season. Villanova has been notably weak defensively, but hasn't had as much trouble scoring. That difference left the Cardinals with just a 3-point lead at half-time at Pittsburgh on Saturday, but ended with an 11-point los for the Panthers.

Siva credited his team's ability to keep the rebounding differential close for their win over Pitt (they were beat 12-8 on the offensive glass but had slightly more total rebounds). Villanova has been very good on the boards this season, however, and will try to vacuum up every ball on their trip to Kentucky, which will be key with two teams that are as likely to teach a masonry lesson as play basketball.

Villanova will again rely on Maalik Wayns and JayVaughn Pinkston to create scoring opportunities, drive to the basket, draw fouls and score points. Both players have been performing well doing so in the last few games, and the team has been able to scrap its way to two straight wins.

Drawing fouls has been key to Villanova basketball success under Jay Wright. Not only will it get you to the line, but it causes the opponent to become less physical as the game goes on, creating an advantage.

Three of my long-time female friends just enrolled in the same lamaze class taught by my mom.

I don't feel old though.

Ishmail Wainwright, a consensus top 40 small forward from the class of 2013, is listing Louisville (along with at least ten other schools) according to TheRecruitScoop.com.

Fresh off a huge road victory over Georgetown, the Louisville women's team moved up to No. 16 in the AP Top 25 on Monday.

Congrats to Josh Bellamy on his big day in the Battle of Florida All-Star Game. The former Cardinal receiver hauled in three passes for 90 yards, including a 60-yard touchdown from Stephen Garcia. Ryan Kessling also participated in the game.

WR: Josh Bellamy, Louisville. Bellamy set a season-high with 98 receiving yards in a loss to NC State in the Belk Bowl. Still, he had the most receiving yards by a Cardinal in a bowl game since Harry Douglas had 165 against Wake Forest in the 2007 Orange Bowl. His 53-yard reception in the first quarter was a career long and the second-longest pass play for Louisville this season.

The Sacramento Bee with a good piece on former Cardinal, and current 49er, kicker David Akers.

Also a graduate of my mom's lamaze class. Virginia Rutherford teaches you how to breathe out your baby the right away. That just sounds awful.

Jamon Brown shows off his pipes.

Adam Lucas has a new Russ Smith wallpaper to fancy up your computer.

Charlie Strong announced today that the 3rd annual women's clinic will take place on Saturday, June 2 at 5 p.m. at PJCS.

The program includes a Q&A session with the football staff, strategy sessions covering all three phases of the game (offense, defense and special teams) and an equipment demonstration. Clinic participants are encouraged to wear comfortable shoes and Louisville workout attire, as attendees will participate in a series of on-the-field drills with instruction provided by the Louisville football coaching staff. This year, the staff has also added a T-shirt design contest with a prize going to the group of six ladies with the best design.

The camp store will be open to purchase other U of L clothing items, and there also will be a silent auction and raffle. Online registration will be available Feb. 1 at www.cardinalfootballcamps.com. The registration fee is $60 prior to May 11 and the cost will increase to $75 after the date. The fee includes T-shirt and dinner. Free parking is available on the East side of Papa John's Cardinal Stadium. Anyone interested in the clinic can contact Ali Denbow via email at madist01@louisville.edu or by phone at 502-852-6325.

The Louisville softball team has been picked to finish fourth in the Big East by the league's coaches.

And finally, check out this story by former Cardinal Tony Williams about Derek and Nolan Smith.