I gave up doing game predictions for basketball a couple of years ago. Reason being, every time I asserted my belief that Louisville was likely to lose a game and they ultimately did not, I would receive three or four messages either chastising me for my pick or gloating as if I had been rooting for the other team. It became clear that the only way to avoid this was either pick the Cards to win every game - rendering the entire feature meaningless - or just keep my thoughts on the matter to myself.

The point I'm getting to with the lead-in is this: I didn't vocalize it (or...typalize it), but I thought Louisville was going to lose at Pittsburgh on Saturday night. I'd even wrapped my mind around the idea that the loss wouldn't have been that big of a deal and that the salvaging of the season was still perfectly realistic.

Now that the victory has actually occurred, it's pretty apparent just how significant it was...at least for the time being.

It's not like Saturday night was the proverbial "switch flipping" moment where this team all of the sudden starts playing like the top five squad voters believed it to be at the end of December, but given the preceding circumstances, it was almost that crucial.

Several areas of concern (fouling, outside shooting, defensive rebounding) looked significantly improved, several players (Peyton, Kyle, Chane) gave performances that should give them some added confidence going forward and the team as a whole looked like a group that had garnered some much-needed momentum heading into a stretch of winnable games.

We can argue for hours about what "saving" this season would actually entail - remember, a majority of you said "yes" during the summer to the question of whether or not this was a "Final Four or bust' season for Pitino - but the fact is that Saturday's victory over a talented team that had been playing better in a challenging environment was enormous for a number of reasons.

As with all things, time will be the ultimate determinant as far as Saturday's true significance is concerned, but all I know is that it left me cautiously optimistic about the next two months and extremely excited for the next time these guys take the floor. It's a feeling that had been painfully absent since the Notre Dame loss.

Having said that, I'm not sure this is a "ride him until he loses" situation. The man's already out of his element (obviously), and I fear that burning out is even more of a concern than usual here. Obviously, the SS has got to see more game threads, I'm just not sure that tossing him directly into the center of the fire when he had already settled in for what was supposed to be an 11-month sabbatical is the right play.

I'm open to be swayed one way or the other.

For me, this was the game I've been waiting to see Gorgui Dieng play all season. He was, per usual, consistent on offense, but he was a man absolutely possessed on the glass. For the first time since he's been here, Dieng looked like an intimidating presence in the middle whenever a shot was in the air. He finished with 14 boards and 13 points, and, perhaps more importantly, played a whopping 38 minutes.

The other thing that stood out was Gorgui's ability to be a defensive presence without getting into foul trouble. He did a much better job of going straight up when defending someone with the ball in the post while still serving as an effective shot-bloker. He finished the first half without committing a single foul, and still recorded five swats on the evening.

The only thing he does that still hurts us is not going for rebounds after he attempts to block shots and misses. Whenever he goes up for a block and doesn't get it, his first reaction is always to back away and give the official the "I didn't touch him" routine instead of going for the live ball.

Still, more than anything else that happened on Saturday, I thought Gorgui's performance was the biggest cause for optimism going forward.

Maybe we just need to toss up the "Top Ten Gorguis" post before every game.

I tried to do a "Lord of the Korner: Return of the King" photoshop thing, but then realized it wasn't that funny and I don't know how to use photoshop.

Still, I love you, Kyle...and I'm pretty sure Erin Andrews does too.

We've all been waiting for Peyton Siva's "turnaround moment" for what feels like four months now, and I think we're all together in hoping that it took place during the last six minutes of the Pitt win.

Siva played under control, scored a key basket on a drive, made some big passes and then buried a jumper. All you had to do in order to understand the importance of that last achievement was look at Rick Pitino's fist-pumping reaction. 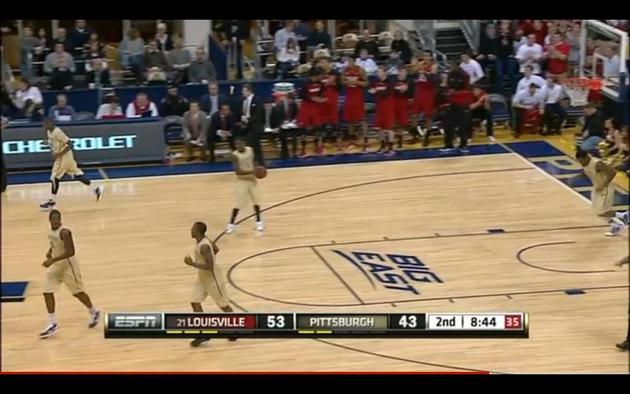 Easily Chane Behanan's best offensive game of the season, and not just because he hit a new career-high with 19 points. Unlike previous games, Chane took proper advantage of the times when he had a recognizable...um...advantage, but he didn't force the issue when he...didn't (wordsmith).

Chane and the egregious turnover had become far too good of friends in recent weeks, but he only gave the ball away once on Saturday night, and it wasn't an especially atrocious mistake.

You also have to love the 7-of-9 performance at the stripe. There's no reason for him not to shoot better than 70% at the line, and he really needs to focus on getting to that number considering how likely it is for him to get fouled around the basket. 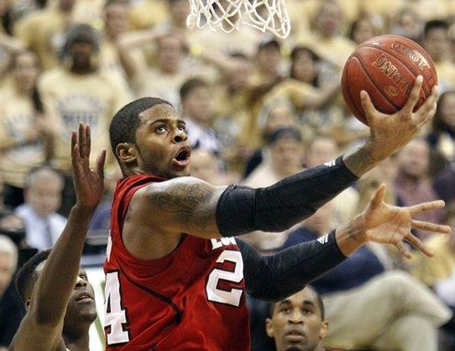 I generally like to watch games in fairly intimate settings so I can concentrate fully and hear everything that's going on. With Vitale on the call, I had no qualms about partaking in a large watch party. According to those who were able to hear Dick, it was the right call. The man has become a complete caricature of himself, and the act sailed way past cute and onto obnoxious several years ago.

Also, I like you Schulman, but you've got to shave that sh-t. It's unbecoming.

Where do you guys think I should take Russ for Valentine's Day? I think it needs to be somewhere classy, but also somewhere where he can feel free to be himself, you know?

I can only imagine that a date with Russ would start off incredibly exciting (Lobster tails as an appetizer!?), get a little weird during the main course (Did he just ask for A1 to put on that ridiculously expensive piece of meat? Oh my God he's eating it with just his hands!) and then ultimately end satisfyingly (Ordered the creme brulee "for himself" but let me eat most of it. Then left a big tip).

No, this is not how I spend the entirety of my days...just my winter days...and summer days when the team is playing in the Bahamas...also, my late May days when I get nostalgic.

All right, it's time for the Debbie Downer portion of the post.

The offense did look vastly superior than it has at any point since the Memphis game, but if we're being honest, at least a solid chunk of that has to do with the fact that Pittsburgh is an awful defensive team right now. Besides St. John's, they're the only team since the Georgetown game that failed to effectively shadow Kyle Kuric. The result was the King getting off nine 3-pointers (most of them being clean looks) and burying five.

The offense was much, much improved, but I don't think Louisville shoots better than 70% in that second half against any team in the Big East other than the Panthers.

Still, a week ago I wasn't sure we could shoot better than 70% for a half without another team in the gym.

Ashton Gibbs can't believe he lost to them bums again.

Not sure what it is, but the Petersen Events Center has just never had the same effect on Louisville as it has on the rest of the conference. The Cards were the first team in the league to win more than once there and are now the first Big East team to win three times there. If not for the absolute collapse in the final minute of the the 2010 game the Cards would be a perfect 4-0 in the Steel City.

Elisha Justice did exactly what we said he needed to do at the beginning of the season: he played minutes, recorded three assists and didn't commit any turnovers.

A friend of mine jokingly made the remark that players were making shots because the passes "felt better coming fro The Bullet," but in all seriousness I think there is something to be said for hitting an open shooter with a pass in the right place and with the right amount of velocity behind it. It seems like a little thing, but any shooter will tell you that a pass that's a foot lower than it should be can absolutely be the difference between a make and a miss, regardless of how open the player is when he lets the shot fly. So much of effective shooting has to do with rhythm, and a lot of times the insignificant things are actually the most important.

Bullet did exactly what we needed him to do during a key stretch, and I hope he continues to get the backup minutes at the one now that he's healthy. 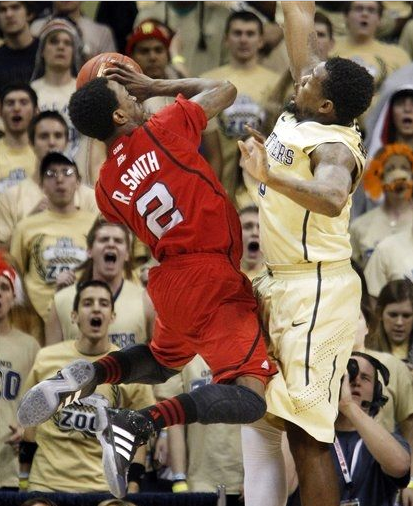 I'm still not sure what Kevin Ware's role with this team should be, but I'm even more sold now than I was before he joined the team that it needs to be limited. I know he brings assets to the table that no one else on the team does, but I don't think those assets outweigh the negatives inherent in his game right now.

Ware is a non-shooter on a below average shooting team. He's not a great ballhandler on a team sorely lacking in player who can create their own shots. He's able to get to the rim, but he's turnover prone and probably the worst free-throw shooter on the team.

I still believe, as I did when his name first popped up as a potential recruit, that if he has the right attitude Ware can eventually become a key contributor here. I just don't see that happening - at least consistently - this season.

I love you, Chris, but that cross-over that takes you nowhere: it's gotta go, man.

My bold prediction before the game was that Zach Price would score more than three points. It's nice to see the football tradition of those being horribly, horribly off-base has carried over onto the hardwood.

So I misspelled "Pittsburgh" on the original game thread. I'm not saying I'm going to be doing that for every thread from now on, I'm just saying if you initially see "Vilanova" on Wednesday night, there's only like a 90% chance that it's because I'm an idiot.

I know I said that beating Pitt at the PEC on GameDay night would be tougher than dealing with them at the Yum, but after seeing Tray Woodall look so rusty I'm not so sure that's the case. When Woodall gets back into playing shape, those guys are going to string together a few wins. They're going to be a completely different team come Feb. 26.

These next three games couldn't be more important. On the surface, all appear winnable (even though U of L has never tasted victory at Seton Hall), and I think it's paramount that U of L goes at least 2-1. The Cards have to have both momentum and a respectable league mark heading into the gruesome UConn/West Virginia/Syracuse stretch that follows.

It's time for a run.