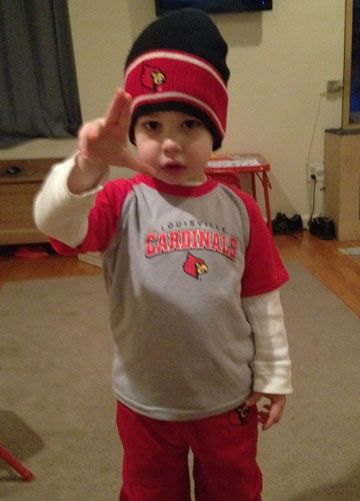 New York native Remington Jude's gotta do it for the ladies...but he's gotta keep it hood.

As of this second, no decision has been made on Kyle Kuric's availability today, but he did make the trip to Milwaukee. Gorgui Dieng is currently listed as "probable."

The safe bets are on Kyle not playing and Gorgui starting and seeing the same amount of court time as usual.

Overall, 5 of the 8 wins came on the road. The most recent 6 wins came in Big East play.

Louisville has taken six of the last seven from Marquette, but lost by 21 the last time the two squared off in Milwaukee.

Five times since 2000, the Cardinals have trailed the Golden Eagles at halftime and then come back to win.

Big news from the world of football recruiting where five-star athlete Josh Harvey-Clemons - the No. 19 overall player in the class according to Rivals.com - has confirmed that he will definitely be visiting Louisville on Jan. 27. Florida and Georgia are widely believed to be the runaway favorites to land JHC, but just getting this guy on campus is a major, major coup for Charlie Strong and company.

Bullitt East star Derek Willis will announce his college decision on Friday at 4 p.m. The junior is choosing between Louisville, Kentucky, Indiana and Purdue.

There's apparently been a lot of pressure on Willis, who originally committed to Purdue, to stay in-state. By all accounts he's a fairly shy kid who seems to just want this whole thing to be over with. I'll be very surprised if he doesn't pick UK on Friday.

Jody Demling reported last night on Twitter that Central running back Ace Wales will announce his college decision on Feb. 6. He'll be picking between U of L, Kentucky and Western Kentucky.

There have also been some reports that UK has let Wales know that they would like him to grayshirt. Not sure what effect, if any, this will have on his decision.

Nice to see that Russ Smith celebrated his DePaul Day performance with a gnome-esque polo toboggan(?). 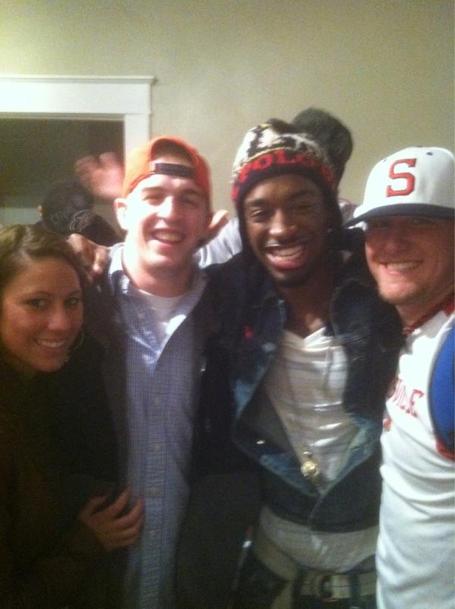 Really wish there was a famous fashion designer with "uss" in either their first or last name. Would have made this follow-up joke a lot easier.

Bill Connelly looks at the 20 best surprises of the 2011 college football season and puts Louisville's maturation at No. 11.

Before the season, it wasn't hard to see Louisville taking a significant, if temporary, step backwards.

Like Steve Lavin at St. John's, Strong inherited an experienced team of Petrino and early-Kragthorpe leftovers and was able to offer significant, immediate improvement on both sides of the ball. His success prompted this Varsity Numbers column about race and college head coaches (and this NPR story), one of my favorites. But this year's encore will come with a much younger squad. The test has only just begun. [...]

I thought Strong was a wonderful hire, and with some of the recruiting battles he has been winning, it's safe to assume this program is on an upward trajectory. But signs point to second-year regression. It's common with teams that take a huge, one-year leap forward anyway, and when you look at the lack of experience involved, it becomes even more likely, even if correlations between experience and success are not as strong as we might think.The schedule is pretty rough, with road trips to Kentucky, North Carolina, Cincinnati, West Virginia, UConn and South Florida, meaning Louisville will have to either sweep the home slate or pull an upset or two to reach another bowl. It's certainly doable, but I'm thinking no amount of Will Stein Positivity™ can make Louisville too successful in 2011.

When the Cardinals fell to both Florida International and Marshall in the first four games of the season on their way to a 2-4 start, it certainly looked like the rebuilding season was in fifth gear. But then a funny thing happened: Louisville almost won the Big East. They knocked off Rutgers, 16-14. Then they went to Morgantown and tripped West Virginia, 38-35. In all, they won five of their last six in the regular season and not only avoided disaster, but made a bowl game. Freshman quarterback Teddy Bridgewater led the way, but freshmen, redshirt freshmen and sophomores absolutely littered the depth chart on both sides of the ball.

Athlon takes a very early look at 2012 Big East football and places the Cardinals second behind a West Virginia team that might not even be in the conference by the time the season rolls around.

The Cardinals had some heavy losses to replace coming into 2011, but even with several young players stepping into key roles, they shared the Big East title with West Virginia and Cincinnati. Coach Charlie Strong is bringing in another solid recruiting class, which will only add to the talent coming back to Louisville in 2012.

Quarterback Teddy Bridgewater took his lumps (12 interceptions) this season, but finished with 2,129 yards and 14 passing scores. Bridgewater will be one of the top passers in the Big East next year, especially if a young group of receivers continues to improve. The offensive line has to be better next year, but will benefit from a full year from center Mario Benavides, who missed the first three games of 2011 due to knee surgery. The rushing attack ranked 93rd nationally, and must show improvement if the Cardinals want to win the conference in 2012.

Strong’s background on defense has helped Louisville rank 18th nationally in points allowed in each of the last two seasons. And the 2012 defense could be even better, especially with cornerback Adrian Bushell and safety Hakeem Smith returning. The Cardinals also have a handful of promising freshmen and sophomores on the depth chart that will be ready for an increased role next year.

Louisville is among those who have reportedly offered a scholarship to diminutive class of 2013 point guard Jaylen Brantley.

And finally, the Louisville women's team took a tough overtime loss to No. 8 Rutgers over the weekend. The Cards return home Wednesday night for a meeting with Providence.