I mean, what more can you say?

Kyle Kuric, the team's rock and leading scorer, is sidelined with a high ankle sprain, Gorgui Dieng shows up to the Yum center wearing a neck brace saying he can't play, the Cards make only five 3-pointers, A GNOME HUSBAND AND WIFE, and the result of all that is a 17-point Louisville victory in which they covered the spread.

Russ Smith led the way for the home team with 25 points while Chris Smith added 20 on 4-of-5 shooting from beyond the arc. U of L shot 50.9 percent from the field after averaging 39.4 percent over its previous five games.

A couple of money quotes from Pitino's postgame press conference:

"Our offense was Russ Smith in the middle of the park in Queens."

"What did Carolina lose by today? Anybody know? They'll probably pack the season in now."

Pitino, who also apologized to C.L. Brown for his rant on Friday, seemed very upbeat and was adamant that losses like the one at Providence happen during a season and that the important thing is learning from it, then putting it behind you and moving on.

There's plenty more to talk about, but for now it's time to enjoy the rest of the holiday.

Hell of a DePaul Day, folks. Every one of you should be proud. 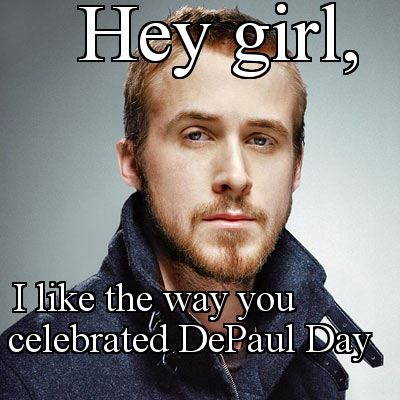