Share All sharing options for: A Look Back At DePaul Day 2011

For those who weren't around last year, I used a U of L gnome which had previously proven itself to be extremely bad luck as the DePaul Day game thread image in order to once again show the power of the holiday. Keep in mind that Preston Knowles also did not play in that game. Some folks were not amused.

I'm now reposting our DePaul Day 2011 wrap to serve as a warning for those of you who haven't (or won't) buy in...also, it's really funny...

If that wasn't bad enough, I try to retreat to the comfort of the game thread, and here's a brief sampling of what I'm greeted with:

The very next time

and I mean the VERY NEXT F’ING TIME, RUTHERFORD… that some bad Karma slaps this program around, I’m coming for you. How DARE YOU bring back that goddamn gnome??? Have you no decency, sir? At long last, have you no decency???

We did this to ourselves.

I hate to say it Mike

"Screech, you CAN'T elope!"
"Who are you calling a cantaloupe, you melonhead?"

You're not just playing with fire.

You’re having a fucking tournament with it in the middle of a playground covered in kerosene.

Just turned the game on;

What the hell is going on?

Not able to watch…

I love how this has turned from

Everyone jokingly blaming Mike to a full on witch hunt.

I can't believe we had to rally to tie DePaul

What the hell is going on here?

Rutherford flipping off the basketball gods.

But it's only DePaul

Mike Rutherford said it was a guaranteed win. We don’t need energy..

I was on a date and I just got home

I think I jinxed things even more. DEPAUL DAY IS RUINED

"If DePaul ends up winning this game I think they'll point to..."

Ever think about going skydiving with that gnome? It’s Depaul day…

Peyton Siva just broke his back

MIKE YOU DID THIS.

Look What You Have Wrought, RUTHERFORD!!!

Are you at least ready to admit that you are responsible if we lose?

Considering that there's no way we lose

This question has no value.

Mike--- YOU ARE GOING DOWN

I really really hate the entire

Rutherford clan right now. If I only had a time machine. And a flying car. We were all supposed to have flying cars by now. WHAT A GYP!

MIKE WHAT DID YOU DO TO THE FLYING CARS?

If we win at the buzzer I will hurt Ruth.

dies before it even can begin. VOTE GNOME ON RUTHERFORD!

I think it died on "Just the Tip" day.

Don’t ever do that again. You got lucky it was DePaul day

Mothball the gnome, friend. Or say howdy to a world of hurt.

should CC talk about how all we have to do is show up to win.

We showed up. We won.

Some shots at me are almost expected at this point, and that's fine, I'm DePaul day tested...but the gnome? 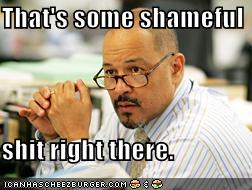 What has the gnome done besides take a solid South Florida football team to overtime and then win a Big East basketball game for a Cardinal squad playing without its leading scorer, rebounder, and shot-blocker? And you "Chronicloids" are thanking him by shooting him with guns, stabbing him with knives, and then trying to paint him as a racist by throwing blackface on him against his will. A "Demon?" Please.

So for all those asking, no, the gnome will not be returning. But he's not being "banished" or "retired," he's being rewarded; rewarded by not having to deal with a group of spoiled, over-sexed ruffians who wouldn't recognize holiday fun if Santa Claus and the cat from Hocus Pocus were doing the Preston Dance in their own living room.

For those of you who celebrated in proper form, I apologize for inconveniencing you with this post. If the Blue Demons should somehow face our Cardinals in the Big East Tournament, drinks and full-body massages will be on me. In the absolutely certain event that this does not occur, I will see you all in 12 months.