Share All sharing options for: Kyle Kuric Will Not Play Against DePaul And More Press Conference Notes 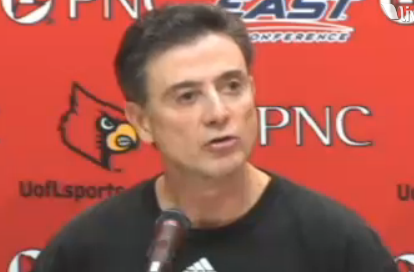 --Kyle Kuric will not play against DePaul. He suffered a high ankle sprain on the first play of practice this morning.

--The key to our success last year was the smaller lineup, and that's something he wanted to work on before the DePaul game. We got one play into practicing with that lineup and then Kyle went down.

--The Villanova game is when Wayne Blackshear should officially be cleared to play.

--DePaul is much improved. They're very good off the bounce and they bring a lot of pressure. They can cause you a lot of problems if you don't handle their pressure well.

--Staying out of foul trouble is so critical for this team. Doesn't agree with a lot of the early fouls that have been called on Gorgui. There are three or four phantom calls every game, and that goes both ways. The way you avoid that is by playing better defense and keeping opposing players from penetrating into the lane.

--None of Peyton's fouls in the past two games have been good. He's been fouling near midcourt and just running into people.

--We can't win with Peyton and Gorgui playing 18-19 minutes a game. They have to play about 35 minutes every night for us to win.

--Elisha Justice is back to being completely healthy and he's ready to contribute more.

--It's really important for the fans to get behind this team. The fact that the fans are dejected about losing is a good thing. You want people who care and are passionate about the game. That said, we need them right now. We've got to win games and anybody is capable of beating us, especially with Kyle out. If we're going to beat seven teams at home, it has to be a collective effort, and that includes the fans.

--The bottom of the Big East is so strong that there really is no bottom.

--We have a tremendous will to win and that's something not all teams in college basketball have. We have 13 tremendous young men and they're going to do everything possible to get the job done from this point on.

--We run a limited amount of sets with Kevin Ware in the game because he's only been here for a few weeks.

--Ends the press conference by addressing C.L. Brown's article about the way the team practices (he's not happy).

Talks at length about his practice habits with the 1987 Providence team. Says he would have deserved any criticism he got then for making the team practice too hard. With the NCAA's new 20-hour rule, he can't work teams that hard anymore even though he wishes he could.

He's worked this team less hard in practice than any other he's had because of all the injuries. They've been pretty much just trying to get ready for the next game since the start of the season.

The article in the C.J. was disingenuous and hurts recruiting. It gave every other team in the country ammunition on the recruiting trail.

Kenny Klein told him about Preston Knowles' quote. Preston was a two-star recruit whose only other option was Western Kentucky, who wasn't even sure if they would offer him a scholarship. All of these other schools passed on him because they thought he had character issues. We gave him a chance, he worked his ass off and he became a great player.

The injuries are not the product of over-working in practice, they're the product of bad luck. Says the article wasn't honest and that he should have been approached before it was written. 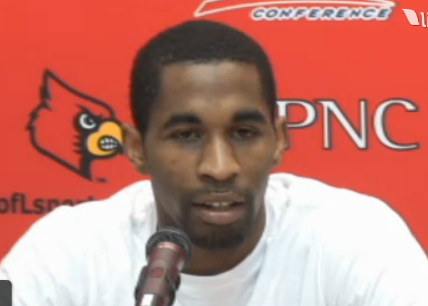 --The players came together and had a team meeting. Feels like they solved the problem. The problem was that the team wasn't supporting each other enough and guys didn't feel like they had one another's back. We've come together now and we had a great practice yesterday.

--In the Providence game there was a lack of effort on the whole team's part, but you'll never see that again. Very confident about that statement.

--The leaders need to stay positive and that's something that wasn't happening earlier in the season. After a 31-point loss, the leaders have no choice but to step up and be positive to keep everyone else positive.

--Kyle going down left everyone in shock. He's always playing and he never goes down. Now everyone has to come together and contribute.

--The captains organized the team meeting and it happened the day after the Providence game.

--Everybody was talking during the team meeting. Luke Hancock isn't even playing this season and he was talking. Everybody said their peace and yesterday we had one of the best practices of the season.

--We have to get back to picking up the pace and running more, and that starts with defense.

--The fans can make a big difference in these last seven home games. If they're into it from the beginning to the end it will make things a lot easier. That said, it's on us to be the ones who get them into the game.

--The players' meeting lasted about an hour.

--Thinks Coach Pitino's goal of winning all seven games and two on the row is achievable. We have the potential to beat anyone. We're still that team that we were at the beginning of the season. We just have to get back to winning.

--Wayne has been hurt for almost a year, but to still see flashes of his potential during practice is unbelievable. He's definitely one of the most talented guys on the team.

--When Russ Smith is in the game and playing his best basketball, that's when we're the best as a team. He has to really step up with Kyle out.

--Knows that he personally has to step up his rebounding with Kyle out.

--The main message of the team meeting was "stay positive and stay together." Everybody knows it's a long season.