On The Origins Of DePaul Day

Share All sharing options for: On The Origins Of DePaul Day

I understand that there are some you who have the basic gist of what DePaul Day is all about, but not a complete understanding.

Let's break it down.

Generally a fan unwilling to overlook even the feeblest of opponents, the day (or days, this year) when the Louisville Cardinals face the DePaul Blue Demons in the game of men's basketball is one I celebrate with extreme reverence. It's an occasion I have, for almost as long as I can remember, referred to simply as "DePaul Day."

For some time, I had danced around the idea that it was somehow impossible for Louisville to lose to DePaul in basketball. I embraced the notion fully for the first time in 1999.

It was on that day that then-freshman walk-on Quentin Bailey completely outplayed eventual Conference USA Player of the Year Quentin Richardson in a 71-68 Cardinal victory. In the middle of the game, Bill Raftery actually referred to Bailey as "the real Q." The Blue Demons had appeared to be the vastly superior team, but an almost supernatural force seemed to prevent them from victory.

Any and all doubt had been removed. DePaul Day was established as an official holiday.

Further proof of DePaul Day's power came five years ago when Juan Palacios - who entered the game having scored a total of ten points in U of L's last four contests - hit eight of ten shots and dropped 21 on the Blue Demons in a 59-50 victory for the struggling Cardinals. Not only was JDP hitting open jumpers, he was effortlessly putting the ball behind his back on the fast break, doing double pump dunks, making no-look bounce passes and various other things that he would have been completely incapable of doing on any other day of the calendar year.

You put Blue Demon jerseys on the Miami Heat, toss them into the KFC Yum Center and put "DePaul" on the scoreboard, and all of the sudden Jared Swopshire is cramming on LeBron James. That's just science.

Now the "record books" show that U of L actually lost overtime games to DePaul in both 2003 and 2004, but the games weren't nationally televised and I was out of town and unable to catch the local coverage, so I don't believe for a second that either of them actually happened. If Kentucky fans can chuck the record books out the window and go with whatever they "know is actually true," then so can we. 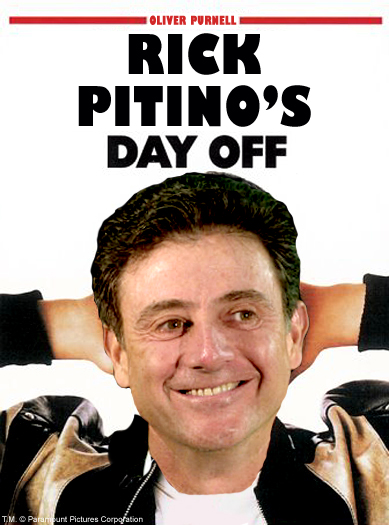 Our enemies have made their intentions quite clear. This chapter of the War on DePaul Day is as vicious as any I can remember. So when stared directly in the face by adversity so large in stature that it's rendered nearly unrecognizable, how are we to respond? Uh, we eat, drink, watch a movie, take a trip to Fiji; whatever we usually do when we're completely at peace. It's f---ing DePaul Day Eve.

Every year I write this post, and every year people flip out, call it a jinx and talk about what they're going to do to me if we lose. This also does not phase me, for it is the eve of DePaul Day and fear I know not thy name (Chaucer).

They may win big, they may win small, but there is one absolute certainty on this Saturday: the Louisville Cardinals will defeat the DePaul Blue Demons.