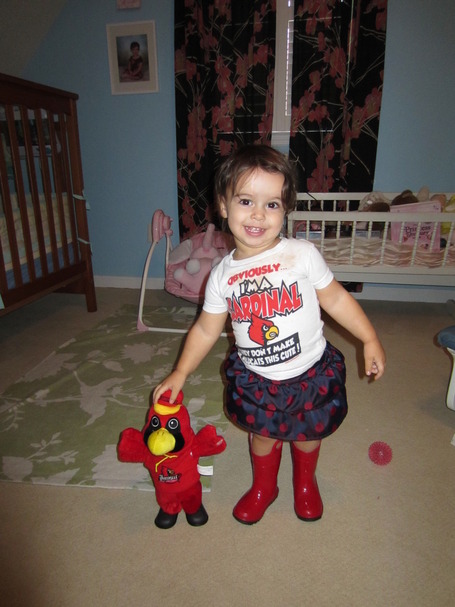 Lennon "Junior" Apple is smiling because she knows it's psychologically impossible for her to have any coherent memories from the past three weeks once she grows up. She's also proud of her shirt. I enjoy it as well.

I'd like to begin this by thanking everyone who contributed to this thread and restored my unwavering faith in DePaul Day.

Truth is, I hardly recognize myself anymore. I look at my...my red hands and my mean face, and I wonder 'bout that man that's gone so wrong.

But that's going to change. I'm going to change. This is the last of that sort of thing. Now I'm cleaning up, moving on, going straight and choosing life. I'm looking forward to it already. I'm going to be just like you. The job, the family, the big f---ing television. The washing machine, the compact disk player and electrical can opener, good health, low cholesterol, dental insurance, mortgage, starter home, leisure wear, luggage, three-piece suite, DIY, game shows, children, walks in the park, nine to five, good at golf, washing the car, choice of sweaters, family Christmas, indexed pension, tax exemption, clearing gutters, getting by, looking ahead, the day you die.

That's two movie quotes in one. There may have even been a third one in there somewhere at the beginning, I don't know.

DePaul Day is on.

The Louisville football roster has been updated.

Of special note is the fact that Jamon Brown has made the move from offensive line back to defensive tackle. Also, Ryan Hubbell, Gerald Christian, Robert Clark, James Burgess, and Keith Brown are all listed and enrolled in school.

The real notable exception, I suppose, is Gerod Holliman. Holliman himself has stated on Facebook that he still plans to be here before the end of the month, but I'd say this is at least a tad troubling as far as the likelihood of him suiting up for U of L in 2012 (or beyond) is concerned.

The way too early 2012 college football rankings have been released at a fast and furious (too fast? too furious?) pace since the end of the BCS national title game, and Louisville has seen its name listed almost surprisingly frequently.

25. Louisville Cardinals: Coach Charlie Strong has done a nice job of rebuilding the Cardinals, guiding them to back-to-back bowl games and a share of a Big East title in 2011. Louisville finished 7-6 this past season despite having one of the youngest teams in the country. The Cardinals started 12 freshmen or sophomores, and 11 true freshmen started at least one game in 2011. Quarterback Teddy Bridgewater, tailback Dominique Brown and receiver DeVante Parker give the Cards a nice foundation on offense, and their defense should get better as a young secondary matures. Louisville's Big East schedule hasn't yet been released, but it will play nonconference games against Kentucky (home), FCS foe Missouri State (home), North Carolina (home) and Florida International (road) in 2012.

23. Louisville – The Cardinals came up just short of winning the outright Big East title this season. However, the future looks very bright. Louisville had a plethora of young players see time this season, including true freshman quarterback Teddy Bridgewater. The offensive line struggled this year, but should be better in 2012 with a full season from center Mario Benavides. With West Virginia off to the Big 12, the Cardinals should be the favorite to win the Big East.

Buzz: The Cardinals have a shot to finish between 20th and 25th if QB Teddy Bridgewater makes the improvement expected of a sophomore. Bridgewater did a nice job as a true freshman, guiding the Cardinals to a portion of the Big East title. Coach Charlie Strong is a former defensive coordinator, and his defense should be the best in the Big East next season; nine starters should return on that side of the ball.

13. Louisville: My sleeper pick, based on the number of returning starters in a weak league that’s there for the taking.

Because of NCAA rules, the Kentucky Derby Festival Classic announced this week that it will be moving its annual high school all-star game from the KFC Yum Center to Freedom Hall.
Yet another crushing blow to the Bring Chicken To The Bucket movement. 'Preciate that.

The Big East Coast Bias takes a look at what's wrong with the Louisville basketball team.

2. Inability to shoot the three is slowing down the rest of the offense - The inability to shoot the three hampers the rest of the Louisville offense. Pitino's Louisvilles teams have always used the three-point shot to make space underneath and to keep teams from collapsing on guards trying to get to the basket (like last year with Preston Knowles so often keeping teams honest and letting Peyton Siva get to the rim). Having at least one marginally good three-point shooter also helped role players like Kyle Kuric and Mike Marra make space for themselves as teams overreacted to other players' movements. With no one to fear outside, Louisville has virtually nothing to work with in a half-court set. As was the case with Notre Dame, defenses simply pack the lane to stop driving guards Siva and Russ Smith. On the perimeter, no fear of the three has kept a typically reliable shooter like Kyle Kuric from being left alone like he often was in 2010-2011. It's no surprise that Kuric's effective field goal percentage has dropped from 65.2 to 59% and his turnover rate has increased from 11.2 to 15.7.

No Mark Jackson Jr. mention sort of makes all those words seem hollow and insignificant once you get to the end, but I like those brahs.

Louisville is currently ranked 115th or worse in 13 of the 15 offensive categories charted by statistical guru Ken Pomeroy. It's ranked 200th or worse in four of those.
Additionally, Louisville fell 12 spots to 37th in Pomeroy's overall rankings. Its adjusted offensive efficiency ranking dropped 14 spots to 125th and its adjusted defense ranking seven spots to 11th.
Thanks to the Twitter accounts of hothot and Mengus for the numbers.

The Cards are now averaging 0.95 points per possession, good for 15th in the Big East. Anyone care to wager on who they're ahead of? Here's a hint: they're DePaulful.
I know, I know, we're starting slow, we're starting slow. Still just getting myself back into the usually natural D Day state of mind.
Concrete jungle where home teams can't win, nothin' to believe in.
I was talking about Chicago, the home of DePaul. A team that isn't very good at basketb--Dammit. Who would have thought a 12-hour hiatus could leave me so rusty?

The Louisville football team finished the 2011 season with some solid statistical rankings.

The Cardinals ended the season ranked in the top 30 in eight different categories, including finishing tops in the country in punt return yardage defense. The team gave up a total of seven yards on 13 returns, which averaged just 0.54 yards per return.

Most of the other statistical accomplishments were on the defensive side of the football under defensive coordinator Vance Bedford. Louisville finished 10th in the country in rushing defense, allowing 100.54 yards per game. The Cardinals held eight opponents under 100 yards rushing and held four teams to less than 70 yards on the ground.

In kickoff returns, the team ranked 27th, with an average of 23.59 yards a return, including a 100-yard return for a touchdown by Adrian Bushell versus Connecticut.

I'm telling you, a "No. 22 In Tackles For Loss" shirt would sell. It'd sell at least one. I f'ing guarantee that. A medium.

Top college basketball teams average ticket resale price: Kentucky $213, Duke $213, Kansas $143, Louisville $129.
Kind of interesting. Kind of not. I don't know, it's already posted and I'm not deleting it. Toss it around at the bar on Friday and see if it sticks. If it doesn't, you probably should have been reading a book (and having a glass of wine) instead of this.

Tony Kornheiser and Gene Wojciechowski discussed Rick Pitino and Cardinal basketball this morning on Kornheiser's radio show. it was depressing.

TONY KORNHEISER: Rick Pitino was, in my mind, a heroic figure when he went to Kentucky, given all the sanctions against Kentucky and all of that, and he won so quickly, and as concieted as he is and was — I always really liked him, he’s a Long Island boy and I was used to all that stuff — I don’t think he’s anywhere near that now. It almost looks like this second act at Louisville, it’s almost, not sad, beause he wins a lot, but he doesn’t win championships, there’s something deflating about it, and now almost deflating about him. He’s already announced, and God knows why, that he’s going to retire in four or five years. What do you make of, I would guess that you like Pitino, what do you make of him now?GENE WOJCIECHOWSKI: Well … KORNHEISER: That was long-winded, wasn’t it Gene?WOJCIECHOWSKI: No, no, it wasn’t long-winded at all and it’s a valid point because, simply because Louisville isn’t Kentucky. No place is Kentucky. And so anything that Rick Pitino chose after Kentucky, at least in the context of the college landscape, was never going to equal what the Big Blue Nation is. I mean, people used to drive by his house in the cul de sac outside Lexington just to look at his house. I mean, they didn’t do that when he was coach of the Knicks. I don’t think they do that when he’s the coach of Louisville

Billy Gonzales, the LSU assistant many thought could wind up as Louisville's new offensive coordinator, has accepted the same position at Illinois.
It'll be interesting to see what happens from this point on since Gonzales was the only name other than Shawn Watson that seemed to have any legitimate clout behind it.

I hesitate even mention this, but it's been pointed out to me by more than one of you that the Miss Hawaii (work/school/significant other warning: her picture is a touch graphic) Twitter account has been tweeting recently about having a boyfriend on the Louisville basketball team who is flying her into town tonight.
This is the same individual who made headlines last June by claiming to have a tape of Kyrie Irving masturbating that she would release to the public on NBA Draft night. It was a claim she ultimately could not substantiate.
Well, this is....yeah....and the plot thickens.
If this is true - and lying certainly seems to be in this woman's blood - the only Cardinal I guess I could see with the means to have contact with her and fly her out to Louisville is Chris Smith...or Tim Henderson. Definitely one of the two.

In far more wholesome news, Rick Reilly has a great piece on the historic - and at times tumultuous - year that former U of L kicker David Akers has had.

Five-star football recruit Josh Harvey-Clemons is possibly visiting Louisville on Jan. 27. That would possibly be cool.

Teddy Bridgewater has been named as an early 2012 Heisman Trophy candidate by Scout.com's Lisa Horne.

Thoughts and prayers to the family and friends of former U of L football coach Vince Gibson, who passed away on Tuesday.

Because of coach Charlie Strong, people want to like Louisville, they really do. The Cardinals finished 2011 winning four of their final five regular-season games and clinched a share of the Big East title. Their first three games are at home, two of which come against BCS teams Kentucky and North Carolina. Granted, those aren't great BCS teams, but they will count for something. And if Cincinnati loses early (which they could against Virginia Tech) and West Virginia bolts for the Big 12 (and the Mountaineers think they will), the Cardinals will be the team receiving the annual "we need to move a Big East representative up in the rankings" boost.

Just realized how long this is. I'm not even going to have time for my non-sequitur Cardinal head, and that's my favorite one. Actually, I guess this is it...and great, it's total shit.