Share All sharing options for: The Bryce Cotton Odyssey

It has been brought to my attention that there are more than a few new readers who are a bit confused by this site's heightened interest in Providence sophomore Bryce Cotton. There are also several long-time readers who are puzzled by the phenomenon as well.

Let's break this down as best we can.

--In the summer of 2010, a young man by the name of Austin Montgomery began posting his thoughts in the FanPost section. Let's just say he made quite the splash.

--Montgomery's most-discussed post quickly became "Bryce Cotton Wouldn't Mind Louisville," in which he broke down the basketball skills of Cotton, a classmate of his at Palo Verde High School in Arizona.

And he has a massive 43' verical leap, this dude can fly. Being a team reporter I made friends with everyone on the team as well as bonded like part of the team, i traveled everywhere they went watched and reported every game, and the biggest blessing was meeting BRYCE COTTON.

I always mess around with him because he likes UK and is a big Wall fan, well I talked to him one day about the possibility of going to Louisville and told him about tradition and all the other UofL goods, he seemed real interested, he sent in some tapes to UL and I hope Rick got the tapes. Bryce is a great kid, church boy HIGH GPA and voulunteer here in Arizona. But inside the lines hes a beast. Bryce has had 4 games where he scored over 35 points and one game where he scored a career high 40 in the first round of state. He led a Titans team who was 17-14 the year prior to a 24-7 season in 09-10. He once scored 12 points in 20 seconds in 1st round of state. You guys can check out ssome videos I did of him on YOUTUBE "Bryce Cotton" or you can check his maxpreps page

--Naturally, the post sparked a bevy of...skeptical...comments. It didn't help that Cotton was an already-graduated senior with virtually no national profile.

--Eventually all of the "hype" led to a July 23 post titled simply "Bryce Cotton For Louisville."

Rarely, if ever, has one name come from seemingly out-of-nowhere and caused such a stir amongst the U of L fanbase.

Since my man Austin Montgomery's FanPost Wednesday night, I've been flooded with questions concerning the mysterious Mr. Cotton. Who is he? Is he really good enough to play at Louisville? Is he secretly the reason LeBron chose to leave Cleveland? The answer: I don't know; I'm not a Palo Verde High team reporter who made friends with everyone on the team.

--A little bit more digging showed that Cotton was actually a pretty good high school player who was receiving some interest from a number of junior colleges as well as a Houston Baptist program that had just made the jump to Division-I. Unfortunately Cotton was one of three players fighting for Houston Baptist's one available scholarship and the program ultimately chose to go in another direction.

--Chronicloids talked briefly about purchasing Miami-Dade gear and following his career as a shark, and then prepared move on. This is where the Cotton saga was supposed to end.

--No less than a week after his commitment to Miami-Dade, talk began to circulate that - out of absolutely nowhere - Cotton was actually being looked at by Providence. He committed to the Friars on Aug. 30.

--PC fans all over the Internet linked to Card Chronicle following the commitment, citing the fact that "Louisville fans were basically obsessed with Cotton over the summer."

--OK, this guy's actually pretty good. He sees solid court time as a freshman at Providence, playing over 15 minutes a night and scoring in double figures four times.

--Bryce Cotton comes to the Yum on Louisville's Senior Night. 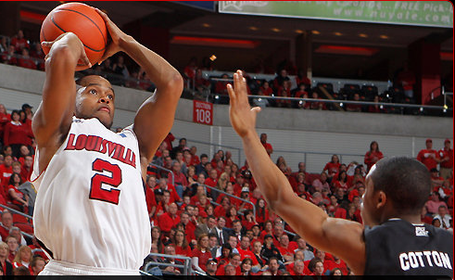 --Cotton proves in his sophomore season that he's more than just decent, getting off to a torrid start and ranking third in the Big East in scoring after three weeks. He enters tonight's game averaging 13.9 ppg and is Providence's top outside threat.

I'm still not entirely sure what happened or how this all came to be, but that's the best way I can describe "The Bryce Cotton Odyssey."