Share All sharing options for: Beat FIU news and notes 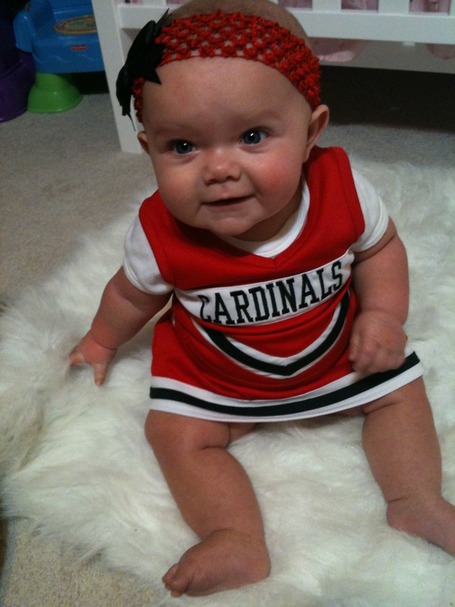 Abigail gets game day duty. I think she's up to the task.

Remember how upset Louisville fans were when this game was scheduled? The discontent wasn't over scheduling a dangerous non-AQ school who might be able to upset the Cards a week before their showdown with Kentucky, it was over scheduling a walkover that would result in little more than boring September football.Even this summer, there were zero Cardinal fans paying this game any more than a passing glance.

Fast-forward to today and there are zero major (or minor) sports media folks predicting Louisville to win this game with any semblance of ease. The folks in the Miami area are predicting a Florida International upset, nearly across the board, and several others on the national scene - as well as Louisville's own Eric Crawford - have joined them in that belief.

If the Cards are "upset" this week and then take an emotional loss next week in Lexington, this season could definitely start racing towards negative town before we make it out of September.

Make no mistake about it, tonight is enormous.

One person feeling confident is freshman corner Andrew Johnson, whose older brother Darian Mallary is a running back for the Golden Panthers.

You've got to have confidence to be a true freshman starting at cornerback.

Our friends at the Big East Coast bias take a look at this evening's game and see Louisville bringing home a narrow victory.

Jody Demling reports that Gary Harris and Louisville are still trying to work out a date for the Indiana star to take an official visit. U of L's ability to actually get him on campus will go a long way in determining whether or not the Cards are actual contenders for Harris' services.

SBN says Louisville should win tonight, but adds that an upset would not be shocking.

Flying a bit under the radar is the fact that the Louisville women's soccer team is taking on Kentucky tonight at 7:30 in Lexington. The Wildcats are a perfect 5-0 while the Cards have stumbled a bit out of the gate, and currently stand at 1-3-1.

U of L needs a victory from the ladies to even things out in rivalry month after the volleyball Cards were swept by Kentucky on Wednesday night.

In case you missed it, we had our first (to my knowledge) CC comment from a current basketball player yesterday. Well done, Kevin, and good luck today.

Word continues to spread that point guard Terry Rozier is the player most likely to become Louisville's first commitment in the class of 2012. He's set to visit U of L later this month.

For a scouting report on Giacomini’s attributes, a solid source is defensive end Raheem Brock, who faces the towering 6-foot-7, 318-pound Giacomini in practice.

Giacomini makes no apologies for his aggressive and physical play. He considers it the cornerstone of his game.

How do defenders respond?

Giacomini’s repertoire includes some oral shots and energetic contact … whatever it takes to provoke the defender.

"Yeah … that’s fine," he said. "I try to take care of my teammates, but everybody else … you’ll know that I’m there, you know what I mean."

Kentucky fans know what he means.

And finally, the men's soccer team hosts IUPUI this evening at 5 p.m. inside Cardinal Park. For those attempting to pull off the double tonight, Godspeed.