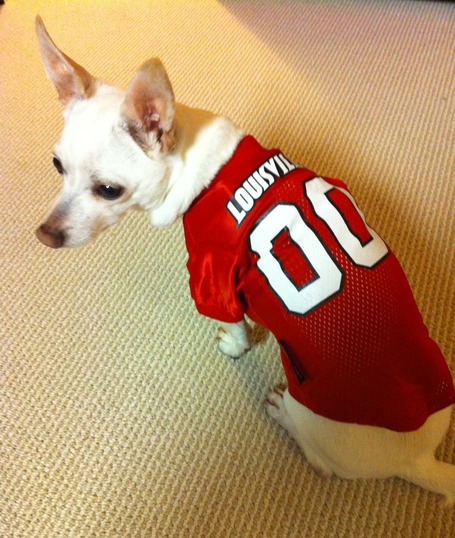 The Card Chronicle children/pet war wages on as DC Card Fan's dog, "UofL is my hot hot sex" brings us today's news and notes. Is that his actual name? I'd like to think so...I like to think so.

Just a reminder that if you're an out-of-towner who would like to watch tomorrow night's game with fellow Card fans in your area, shoot me an email (MikeRuth5@aol.com) and let me know where you're going to be and I'll spread the news. I'll be posting the "where are we watching" list tomorrow morning so everyone can make their evening plans accordingly.

A second reminder to get your picks in for both the CC college football pick 'em and NFL survivor leagues if you're playing.

We talked earlier about Charlie Strong's updates on the injured Cardinals, but here are a few more notes from his radio program last night:

--He had some serious praise for Shenard Holton, whom he said has really grown up and is one of the most improved players on the team. This would seem to fall in line with the "wake up call" most of us were talking about last month when Shenard stated that he'd been replaced in the starting lineup by freshman Calvin Pryor.

There's no doubt that Holton's one of the most talented defenders on U of L's roster, and in game one I thought he definitely outplayed the much more hyped Hakeem Smith, who was out of position on pass coverages a handful of times. Shenard's got to have a big year for the defense to at least be as successful as it was a season ago, and I believe he will.

--Strong also mentioned the fact that Will Stein and Teddy Bridgewater have significantly different cadence. This is a widely overlooked reason behind the three penalties and ultimate failure of Teddy's only series behind center last week. Definitely something that more snaps will help iron out.

--Strong would have liked to have gotten Bridgewater at least one more series, but the opportunity didn't present itself. By the way he was talking, though, I'd expect to see Teddy getting at least two chances to command the offense tomorrow night.

--He reiterated that the defense is still going to blitz and play a lot of man, single-high coverage regardless of who it's up against. With T.Y. Hilton on the other side of the ball, this means Anthony Conner might be the most important player on Louisville's roster for an evening.

There was lots of Chicken Knowles debating happening on Twitter last night between Louisville and Arkansas fans, and Chicken was there to re-tweet almost the whole thing.

The main theme of the debate was, Arkansas Fan: "Louisville hasn't even offered you a scholarship, come to Arkansas." Louisville Fan: "Whatever. #BringChickenToTheBucket."

Way to stick to your guns. I'm proud of you guys.

There has been an equally heated debate raging today over my question of whether or not a U of L sweater-vest purchase is appropriate at my age. The women all seem to want it now (of course they do), while the vast majority of men hate the idea.

That question aside, can we all please agree that these are magnificent? 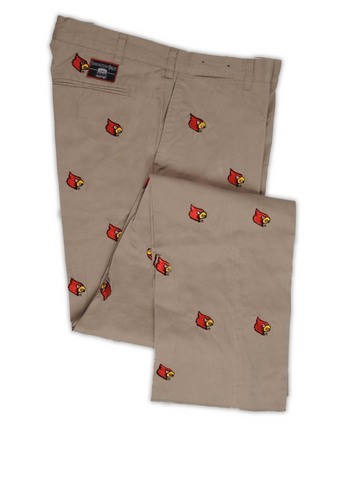 I would wear these and act like I was doing so ironically, but secretly I'd love the outfit. You know you've all been in that position before. It probably involved a hat.

The U of L women's volleyball team had a rough night in Lexington, getting swept in a match vs. the Wildcats for the first time since 1988. The all-time series between the two is now tied up at 24.

The ladies return to action this weekend with three matches at The Ohio Bobcat Classic in...Ohio.

After seeing far too much of it in recent weeks, I've decided that Internet discussions surrounding conference realignment are the equivalent of recruiting talk for grown-ups. It's a little bit more high-brow, but every bit as pointless.

It's essentially the same people who rag on recruiting sites partaking in the exact same behavior. "What if Oklahoma goes to the Pac 10" = "What if Anderson commits to Ohio State." "Who does the Big East go after if West Virginia bolts" = "Who does Pitino offer if White commits to UConn."

It's the guy who will legitimately stab you if you say you even sort of liked Cloverfield, but will also give you a three-hour lecture p the historical and political significance of District 9.

I understand how the various potential scenarios can be interesting or even fun to explore, but I'd prefer to remain little more than a casual outside observer until something substantive actually occurs.

Interesting note about tomorrow's game: FIU running back Darian Mallary (#26) is the older brother of Louisville's starting true freshman corner, Andrew Johnson. Mallary rushed for 712 yards a season ago, but touched the ball just once last week in the Panthers' win over North Texas.

Florida International coach Mario Cristobal says playing on ESPN against Louisville is both "a tremendous challenge and a tremendous opportunity." He says it twice.

Trinity defensive end Jason Hatcher has reportedly picked up scholarship offers from North Carolina and Northwestern. You can add them to the list that (according to Rivals) includes Alabama, Oklahoma, Arkansas, Louisville, Kentucky, Cincinnati and Illinois.

The nationally-ranked Shamrocks are on the road this week at Cincinnati power Elder.

We've done our fair share of Tom Crean-bashing on here over the years, but this is a very, very cool story.

The Panther Prowl blog takes a look at how FIU and Louisville stack up against one another in areas outside of football. Also of note is the fact that zero FIU fans on the Internet believe the Golden Panthers are going to lose tomorrow night.

And finally, C.L. Brown takes a look at starting offensive lineman Hector Hernandez, who says he's trying to make up for the years he "wasted" under Steve Kragthorpe. Ditto that, Hector. It's why I drink before games.